"Virtuous Riches": The Bricolage of Cittadini Identities in Early-Sixteenth-Century Venice Author(s): Monika Schmitter Source: Renaissance Quarterly, Vol. 57, No. 3 (Autumn, 2004), pp. 908-969 Published by: The University of Chicago Press on behalf of the Renaissance Society of America Stable URL: http://www.jstor.org/stable/4143570 . Accessed: 17/10/2011 20:24Your use of the JSTOR archive indicates your acceptance of the Terms & Conditions of Use, available at . http://www.jstor.org/page/info/about/policies/terms.jsp JSTOR is a not-for-profit service that helps scholars, researchers, and students discover, use, and build upon a wide range of content in a trusted digital archive. We use information technology and tools to increase productivity and facilitate new forms of scholarship. For more information about JSTOR, please contact [email protected]

The University of Chicago Press and Renaissance Society of America are collaborating with JSTOR to digitize, preserve and extend access to Renaissance Quarterly.

" Tt has been our good fortune," Pietro Aretino wrote to his fellow TuscanSansovino, "that here [in Venice] the worthy forIexpatriate, Jacopo eigner is not only the equal of a cittadino, but on par with a nobleman."' Ever the astute observer of status distinctions, Aretino provides an intriguing, even paradoxical, view of social stratification and social mobility in early-sixteenth-century Venice. He indicates the hierarchicalrelationship between cittadini and nobili, while at the same time suggesting that the rigid political and legal distinctions between the two orders could in some sense be transcended. Despite Aretino's estimations of his own possibilities, however, the highest social level that immigrants to Venice could ever hope to achieve was cittadino status since the ruling nobility was a closed caste. The cittadini, an intermediary social group between the popolo (common people) and the patriciate, have traditionally not received much attention in Venetian historiography.This has begun to change in the last decades and especially in the past ten years; as the number of studies devoted to

'This article is the distillation of an argument I make in my dissertation (University of Michigan, 1997). I am therefore most grateful to the members of my committee, Celeste Brusati, Stephen Campbell, Diane Owen Hughes, and, most of all, the chair, Pat Simons: all have played a vital role in the project. Funding for the research was provided by the Gladys Krieble Delmas Foundation and the University of Michigan Department of the History of Art and Rackham School of Graduate Studies. I would also like to thank Craig Harbison, Barbara Heisler, Marc Lambert, Alison Luchs, the anonymous reader for RenaissanceQuarterly, and participants in the University of Massachusetts Interdisciplinary Seminar in the Humanities and Fine Arts for their constructive and helpful responses to versions of this article. 'Aretino, 1:81 (20 November 1537): "Estata nostra ventura, poi che qui il buon forestiero non solo si agualia al cittadino, ma si pareggia al gentiluomo." All translations are mine unless otherwise noted.

cittadini has increased, the social group has begun to assume a more prominent, as well as a more nuanced, position in our view of Venetian society.2 Although we now have a better understanding of the development, make-up, and political and economic roles of the class, it is still hard to grasp the exact nature of their social position and status. In short, it remains difficult to understand what it meant to be a cittadino, especially in the early sixteenth century, when the group was less precisely defined than later in the century. This article contributes to this developing area of research by investigating the collecting practices of two prominent early-sixteenth-century cittadini. By examining the literal bricolage with which these men surrounded themselves we may gain access to the metaphorical bricolage of their identities.3 My aim is also to investigate how members of this "second elite" might have contributed to the development of Venetian art. Although some researchhas been done on private cittadini patrons and collectors in later periods and a few earliercittadini have been studied as individuals, their impact as a social group on the style and iconography of Venetian art of the early sixteenth century deserves further examination.4 This article questions the assumption that cittadini emulated the interests and behaviors of the patriciate, at least in their collecting practices. An alternative theoretical model, drawn from sociological, anthropological, and historical analyses of collecting, suggests that the cittadini should be cultural innovators rather than followers. I investigate this hypothesis through case studies of the collectors Francesco Zio (1477-1523) and his nephew, Andrea Odoni (1488-1545).1. CITTADINI AND SOCIAL EMULATION

The idea that cittadini constituted an identifiable "order" grew over time and can be seen as a byproduct of the Serrata [Closure] of the noble caste in the late thirteenth and early fourteenth centuries.5 In Venice, unlike in other Zan2Seeespecially 1971,1999;Ell;Neff;CozziandKnapton, 133-46;Casini; Pullan, de nini;Trebbi, 162-82;Bellavitis, 1997;Grubb; Maria. 1995a,1995b; Schmitter, 30n bricolage identities Findlen, and see 1994,296.4Hochmann, 187-218; de Maria. For earlier cittadini patrons see, for example, Goffen on Nicol6 Aurelio; Neff, 268-73. The cittadini have been studied primarily as corporate pa-

and Pullan, 241, use "estate." I prefer the sociological term "status group" since, in the early

I would seemto imply. usedavariety terms of tate" However,have interchangeably, including defined a "caste." as"class," althoughI do not use it in the Marxistsense.The nobility,on the otherhand, may be

Italian cities, individuals and families who distinguished themselves through wealth, occupation, or accomplishments had no possibility of entering the ruling elite. As a result, over the course of the fourteenth and fifteenth centuries a new social group began to emerge, whether through their own ambitions or for the convenience of the patriciate. Citizens who were educated and "honorable" - but not noble - were increasingly given important bureaucratic positions in state government, as well as in the administration of the major charity institutions, the Scuole Grandi.' While not all cittadini were so employed, the ability to hold offices that were often reserved only for cittadini was a valued privilege.7 Over the course of the sixteenth century the requirements for obtaining different levels of citizen status (and the economic rights and bureaucratic offices with which they corresponded) became more stringent, contributing to the exclusivity of the cittadini as a group.8 By the late fifteenth and early sixteenth centuries, severaldescriptions of the city and its government clearly identified three distinct orders. In 1493 the patrician Marino Sanuto wrote in his encomium of Venice: there are three classes of inhabitants:gentlemen who govern the state andrepublic .. .

citizens; and artisans or the lower class. The gentlemen are not

from the citizensby theirclothes,becausethey all dressin much distinguished6For an overview of the formation of the class see Zannini, 23-60. It is generally assumed that the cittadini themselves pushed for special recognition (see, for example, Ell, 206; Neff, 2, 190-93; Grubb, 354), but as Bellavitis, 1995b, 367-70, notes, the formation of a special status group also served the interests of the nobility. 7Grubb, 341, points outs that the cittadini who held offices in the state bureaucracyhave received the lion's share of scholarly attention, although they were only a subset of the larger group. 8There were several different kinds of citizenship, each with its own qualifications and privileges. Cittadini originari were members of well-established Venetian families (usually meaning that one's father and grandfather had resided in the city), and held the most politically sensitive offices. The status de intus was awarded those who had lived and paid taxes in the city for a certain period of time (generally fifteen years) and allowed them to hold minor bureaucratic offices and engage in commerce within the city. Citizenship de intus et de extra required a longer period of residence (usually twenty-five years) and provided access to more-important offices and the right to trade between Venice and elsewhere with lower customs fees than for foreigners. Qualifications for all three forms fluctuated somewhat 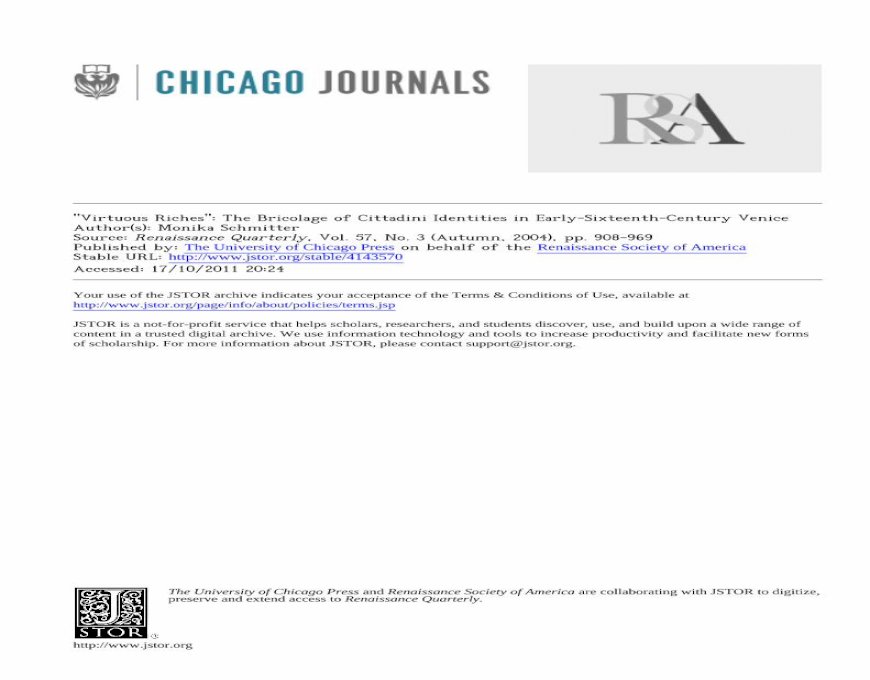 SCHMITTER HYDRAULIK SERVICE OVERVIEW · PDF file Our portfolio is also your success. Make use of our neutral or customized cata-logs. These do not include the Schmitter logo and there

Riches of all Riches!

Schmitter Still the Century of ism