Home >Documents >shadow of the swastika

shadow of the swastika

DownloadReport this document
Share this document with a friend
Description:
Documented Evidence of a Secret Business and Political Alliance Between the U.S. "Establishment" and the Nazis - Before, During and After World War II - up to the Present.
Transcript:

SHADOW OF THE SWASTIKA:The Real Reason the Government Won't Debate Medical Cannabis and Industrial Hemp Re-legalizationAn Open Letter to All Americans By R. William Davis Documented Evidence of a Secret Business and Political Alliance Between the U.S. "Establishment" and the Nazis Before, During and After World War II - up to the Present.

Before the Gatewood Galbraith for Governor Campaign in 1991, few Kentuckians knew that the plant that the federal government had demonized for over 50 years as "Marijuana Assassin of Youth," was, in fact, Cannabis Hemp, the most traded commodity in the world until the mid-1800s, and our state's number one crop, industry, and most important source of revenue, for over 150 years. Today, thanks to the efforts of pioneer hemp researchers and public advocates such as Galbraith, Jack Fraizer, Jack Herer, Chris Conrad, Ed Rosenthal, Don Wirtshafter and others, the federal government's unjustifiable suppression of our state's right to develop our most valuable and versatile natural resource, is facing increasing opposition from an informed public. Hemp is now recognized as the number one agriculturally renewable raw material in the world, and perhaps the only crop / industry which can guarantee us industrial and economic independence from the trans-national corporations. "Shadow of the Swastika" is a follow-up to my earlier work, "Cannabis Hemp: the Invisible Prohibition Revealed," which I wrote and published in support of the Galbraith Campaign. Since publication of that booklet, there has been growing public acceptance of the evidence that Marijuana Prohibition was created in 1937, not to protect society from the "evils of the drug Marijuana," as the Federal government claimed, but as an act of deliberate economic and industrial sabotage against the re-emerging Industrial Hemp Industry. Previous investigations by hemp researchers have been limited to the suppression of freemarket competition from the hemp industry, and focused on the activities of three prominent members of America's corporate, industrial and banking establishment during the mid- to late-1930s: WILLIAM RANDOLPH HEARST, the newspaper and magazine tycoon. The expected rebirth of cannabis hemp as a less expensive source of pulp for paper meant his millions of acres of prime timberland, and investment in wood pulp papermaking equipment, would soon be worth much less. In the 1920s, about the same time as the equipment was developed to economically mass-produce raw hemp into pulp and fiber for paper, he began the "Reefer Madness" hoax in his newspaper and magazine publications. ANDREW MELLON, founder of the Gulf Oil Corporation.http://www.whale.to/b/davis_william.html (2 of 54)7/1/2006 7:22:51 PM

He knew that cannabis hemp was an alternative industrial raw material for the production of thousands of products, including fuel and plastics, which, if allowed to compete in the free-market, would threaten the future profits of the oil companies. As Secretary of the Treasury he created the Federal Bureau of Narcotics, and appointed his own future nephew-in-law, Harry Anslinger, as director. Anslinger would later use the sensational, and totally fabricated, articles published by Hearst, to push the Marijuana Tax Act of 1937 through Congress, which successfully destroyed the rebirth of the cannabis hemp industry. A prominent member of one Congressional subcommittee who voted in favor of this bill was Joseph Guffey of Pennsylvania, an oil tycoon and former business partner of Andrew Mellon in the Spindletop oil fields in Texas. THE DU PONT CHEMICAL CORPORATION, which owned the patents on synthetic petrochemicals and industrial processes that promised billions of dollars in future profits from the sale of wood pulp paper, lead additives for gasoline, synthetic fibers and plastics, if hemp could be suppressed. At the time, du Pont family influence in both government and the private sector was unmatched, according to historians and journalists. This publication, however, reveals documented historical evidence that the suppression of the hemp industry was only one key part of a much larger conspiracy in the 1930s, not only by the three corporate interests named above, but by many others, as well. Congressional records, FBI reports and investigations by the Justice Department, during the 1930s and 1940s, have already documented evidence of this wider plot. A list of the corporations named include Du Pont, Standard Oil, and General Motors, all of which were proven to be conspiring with Nazi industrial cartels to eliminate competition world-wide and divide among themselves the Earth's industrial resources and commercial markets, for profitable exploitation.

This conspiracy succeeded. It is now obvious that this lack of serious competition in the industrial raw materials market caused our present - and totally contrived - addiction to petrochemicals. Its success is directly responsible for the most troubling problems we now face in the 1990s; serious damage to our environment, concentration of economic and political power into fewer and fewer hands, and the weakening of the rights of individuals and states to determine their own futures. It is more and more evident that, given the historical record, the structure of the Newhttp://www.whale.to/b/davis_william.html (3 of 54)7/1/2006 7:22:51 PM

World Order is being built upon the Foundation of Marijuana Prohibition, and only the relegalization of free-market hemp competition can save us. R. William Davis July 4, 1996 Louisville, Kentucky

INTRODUCTIONTo clearly understand the circumstances which existed during the 1930s and 1940s, and are the subject of this booklet, it would be helpful to first put the hemp / petrochemical conflict into historical perspective. The events which took place in the years leading up to World War II were a continuation of a struggle between agricultural and industrial interests that began before the American Revolution, a struggle which has yet to be decided, even today. AGRICULTURE VS. INDUSTRY The historical record, at least as it has been presented to us in the public school system, is that the Civil War was fought to end slavery. This is not the whole story. The truth of the matter is that it was also a clash between Northern industrialists and Southern agriculturists, over control of the expansion into the newly opened West. In 1845, Abraham Lincoln wrote, "I hold it a paramount duty of us in the free states due to the union of the states, and perhaps to liberty itself, to let the slavery of other states alone." (1) Concerning the Western territories, he said "The whole Nation is interested that the best use shall be made of these territories. We want them for homes and free white people. This they cannot be, to any considerable extent, if slavery be planted within them." (2) Lincoln was caught in the middle between the Northern industrialists and the Southern agriculturists, who both wanted to dominate Western expansion because of the wealth it offered. The industrialists knew that the agriculturists depended on slavery because cotton, upon which Southern wealth was based, was very labor intensive and required the inexpensive labor that slavery provided. They knew that if the Western lands were declared "free states" then the Southern agriculturists would be unable to compete, and would be forced to leave Western expansion, and its potential profits, to the Northern industrialists.

Quoting "The Irony of Democracy," by Thomas R. Dye and T. Harmon Zeigler, "The importance of the Civil War for America's elite structure was the commanding position that the new industrial capitalists won during the course of the struggle. . . . The economic transformation of the United States from an agricultural to an industrial nation reached the crescendo of a revolution in the second half of the nineteenth century. "Civil War profits compounded the capital of the industrialists and placed them in a position to dominate the economic life of the nation. Moreover, when the Southern planters were removed from the national scene, the government in Washington became the exclusive domain of the new industrial leaders." (3) The Northern industrialists used this increased capital to build the system of transcontinental railways, linking the Northeast with both the South and West. The labor for this undertaking was from the Northeastern Establishment's own source of cheap labor - recently freed slaves and poor immigrants from 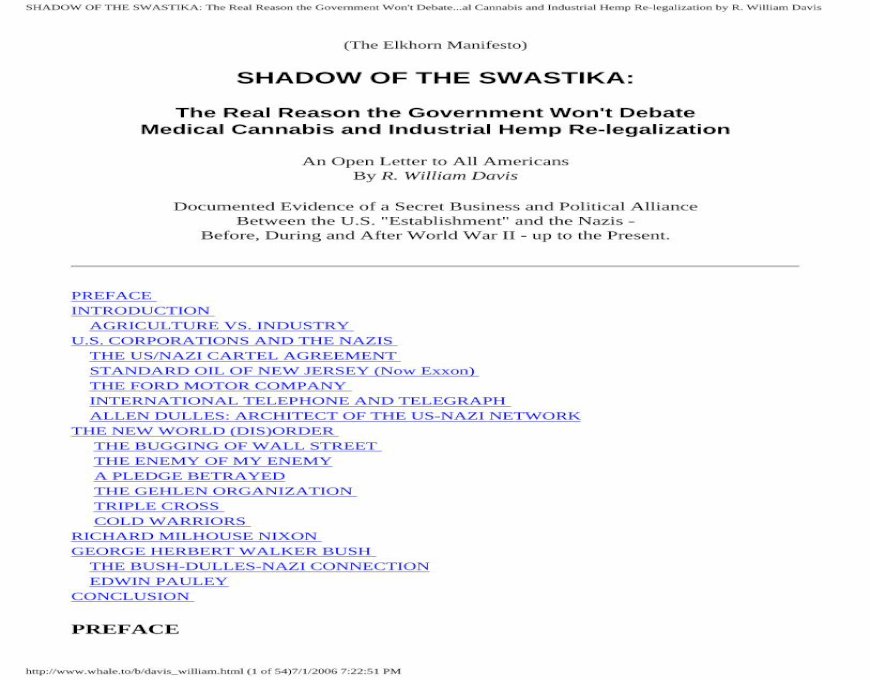 is) swastika is) swastika WEVEST HERE > GET THERE Dated: 06.02.2020 To The Secretary, Corporate Relationship

Hansi the Girl Who Loved the Swastika