.JSTOR is a not-for-profit service that helps scholars, researchers, and students discover, use, and build upon a wide range of content in a trusted digital archive. We use information technology and tools to increase productivity and facilitate new forms of scholarship. For more information about JSTOR, please contact [email protected]

Association for Slavic, East European, and Eurasian Studies is collaborating with JSTOR to digitize, preserve and extend access to Slavic Review.

Soviet Car Rallies of the 1920s and 1930s and the Road to SocialismLewis H. Siegelbaum

When, on the morning of 6 July 1929, Nikolai Osinskii left Red Square at the head of a small caravan of five cars, it was not to take an ordinary automobile trip. Then again, Osinskii was hardly an ordinary automobilist. An aristocrat by social origin, an economist by training, and a Bolshevik since 1907, he had served variously in the Soviet government as assistant Commissar of Agriculture, director of the Central Statistical Administration, and a member of the State Planning Commission (Gosplan), before becoming assistant Commissar of the Supreme Council of the National Economy in 1929. Two years earlier, he had made an unusually strong case for the "automobilization" of the USSR in a lengthy Pravda article, "The American Automobile or the Russian Cart?"' The article, reissued as a pamphlet, sparked the formation of the Society for Cooperation in the Development of Automobilism and Road Improvement (Avtodor), which Osinskii served as president.2 In 1928, Osinskii traveled to the United States for talks with the Ford Motor Company. The fruit of these and other discussions was a contract signed with Ford in May 1929 for the building of a Soviet factory capable of producing 100,000 vehicles a year.3The research for this article was made possible by support from the College of Arts and Letters, Michigan State University. Earlier versions were presented at the Center for Russian and European Studies at Michigan State University, 31 October 2003; at the 35th national convention of the AAASS in Toronto, 23 November 2003; and at the Russian History Workshop at the University of Chicago, 20 April 2004. I am grateful to the participants in these forums for their comments and suggestions, and to Marcie Cowley for research assistance. 1. N. Osinskii, "Amerikanskiiavtomobil' ili rossiiskaia telega?" Pravda, 20, 21, 22 July 3rd ed., 30 vols. 1927. For biographical information see Bol'shaiasovetskaiaentsiklopediia, (Moscow, 1970-78), 18:558. Osinskii's enthusiasm for the automobile may have come from his trip to the United States in 1925-26 about which he wrote an account for the general public. See N. Osinskii, Po tu storonuokeana:Iz amerikanskikh vpechatleniii nabliudenii (Moscow, 1926). He noted inter alia that "itis characteristic of America that cars are used much more often than they are needed," and that "Americansare so rich that they want to drive only huge four-wheeled vehicles" (61- 62). 2. N. Osinskii, Amerikanskiiavtomobil'ili rossiiskaia telega (Moscow, 1927). One of Avtodor's first activities was to sponsor two "disputy" about the kind of mass-produced vehicle suitable for Soviet roads (or the absence thereof). The stenographic reports of the debates can be found in Gosudarstvennyi arkhiv Rossiiskoi Federatsii, Moscow (GARF), f. 4426 (Society for Cooperation in the Development of Automobiles, Roads, and Transportation [Avtodor]), op. 1, d. 59,11. 1-94 (28 November 1927); d. 317,11. 4-51 (23January 1928). 3. For the negotiations and the contract's contents see Allan Nevins and Frank E. Hill, Ford: 1915-1933 (New York, 1957), appendix 1; Antony C. Sutton, Expansionand Challenge, Slavic Review64, no. 2 (Summer 2005)

Flushed with the success of his efforts, Osinskii set out on his six-day, two-thousand-kilometer trip that he described in Avtodor's journal as and "not a 'real' rally [avtoprobeg] from the automotive-technological sporting points of view." Rather than the advance of technology or the pure pursuit of sport, its ostensible purpose was to test four different foreign models (Ford, Chevrolet, Willy's-Overland, and Durant) to determine which stood up best to Soviet road conditions when driven by nonprofessional drivers over an identical route.4 The distinction is an important one, for it points to the Soviet adaptation of a sporting practice that had evolved since the infancy of the automobile itself in the late nineteenth century. This essay, part of a larger project on the history of the Soviet automobile, analyzes the Stalin-era variant of the car rally known as the avtoprobeg. Elaborately staged and extensively covered in the press, these rallies were a slightly earlier and less spectacular version of the transcontinental and polar flights, in which "technological development, visions of modernity, and the public imagination ... fully converged."5 It is also possible to consider them as exemplary of whatJeffrey Brooks has termed the dramatic Stalinist "theater state," in which the rituals of theater-both and comedic-were employed "to draw citizens into public displays of support."6 While I intend to employ elements of both interpretive frameworks, I also want to stress the specificity of automobiles in the Soviet Union as objects of popular fascination and symbols of the country's the material and metaphorical significance of economic independence, roads and road building, and the significance of car rallies as events staged at least in part to promote the state's control over what automobilism should mean. Cars, like other mechanized means of ground transportation, require roads to get from one point to another, and therefore operate within space that is already known (if not to the driver, then to surveyors, engineers, road builders, and other drivers). Rallies, because they usually involve travel in remote regions where roads are scarce or nonexistent, offer something of a pioneering experience, a blazing of new paths. This abandonment of conventional limitations combined with their novelty made rallies newsworthy and popular events in Europe's interwar period. the 'SovietDetroit':The Construction of the Nizh243-49; and KurtS. Schultz,"Building nii-NovgorodAutomobileFactory,1927-1932,"SlavicReview49, no. 2 (Summer 1990): Fordaob 200-202. See also the statementby the Ford Motor Companyin "Kompaniia no. 3 (1928): 3-4. Avtomobilizatsii Zarulem, SSSR," 4. N. Osinskii,"Dvetysiachikilometrovna avtomobile," Za rulem, no. 15 (1929): 12.and SovietEconomicDevelopment, vol. 1, 1917 to 1930 (Stanford, 1968), Western Technology

Soviet Car Rallies and the Road to Socialism

The same combination of road reliance and defiance, of travel through what can be conceived of as zones of indeterminacy to reach a preset goal, resonated with one of the most frequently used metaphors in Bolshevik discourse-the made rallies irresistible to path to socialism-and Sovietization.7 The Soviet version of car rallies, essentially invented by Osinskii in 1929, persisted for some seven or eight years until rallies reverted to their non-Soviet, sporting origins. In what follows I will be arguing that during their heyday, and particularly evident in the exemplary rally of 1933 through the Kara-Kum desert, accounts of avtoprobegy drew on and reinforced a discursively constructed geography of the Soviet Union.8 They also relied on two images, or "moving metaphors," that were central to Bolshevik discourse. One was the surmounting of obstacles or "fortresses" by "the Bolsheviks" via a combination of heroism and a correct reading of the terrain. This typically applied to both the rally participants themselves-that is, the drivers, mechanics, and navigators as they negotiated the route, dealt with mishaps, battled fatigue, and assisted each other-and their cars, particularly in the case of rallies in which there were Soviet-made models. The other image, more outwardly directed towards the peoples and landscape through which the rallies passed, partook of the path metaphor that placed the entire Soviet Union on the road to socialism. The essay concludes with some reflections on these tropes and the new roles avtoprobegy assumed in the late 1930s. Rallies as Sport Like many sporting events, rallying, which originated in France and spread to other parts of Europe (including Russia) before World War I, was a composite, even c 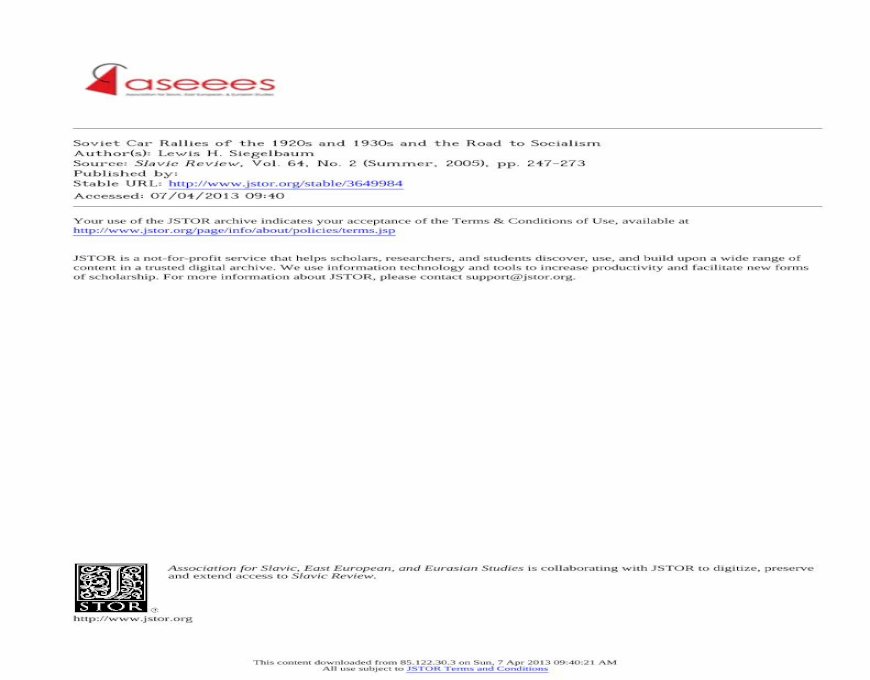