DownloadReport this document
Share this document with a friend
Description:
Specialization, Trade, and Interdependence. Lesson 4. Specialization. Part 1. The Uneven Distribution of the Factors of Production. The factors of production- land, labor, capital, and entrepreneurship- are not spread evenly around the world. - PowerPoint PPT Presentation
Transcript:

Specialization, Trade, and InterdependenceLesson 4Part 1SpecializationThe Uneven Distribution of the Factors of ProductionThe factors of production- land, labor, capital, and entrepreneurship- are not spread evenly around the world.

The Uneven Distribution of the Factors of ProductionDifferent parts of the world have different climates, different soils and landforms, different bodies of water, and different mineral resources.These differences are not limited to natural resources.Different areas also have people with different training, education, and experiences as well.

The Uneven Distribution of the Factors of ProductionAncient Egypt, for example, had many important mineral resources.These resources included copper, tin, gold, and iron.Egypts copper and tin were used to make bronze.

The Uneven Distribution of the Factors of ProductionLater, Egyptians used their iron ore to make iron tools and weapons.Gold was used for decoration and became a form of wealth.

Other places in the Mediterranean region did not have the same mineral resources that Egypt possessed.

SpecializationEven in ancient times, the uneven distribution of both natural and human resources around the world encouraged specialization.Specialization is the making of only some types of goods and services.Each region began making more of certain types of goods based on the productive resources it had available.These specialized products were then traded with others to obtain other goods.SpecializationFor example, the ancient Greeks lived on rocky hillsides that received plenty of sunshine.They could grow grapes and olive trees, but not much wheat. They crushed their olives to produce olive oil for cooking, eating, and using as skin lotion; they crushed their grapes and turned the juice into wine.

SpecializationThe Greeks also became skilled at making clay pottery.The ancient Egyptians, on the other hand, lived along the banks of the Nile.They were able to grow wheat on the flat, fertile lands alongside the river.

Advantages to SpecializationEconomists see several important advantages to such specialization.Each region can take advantage of its own productive resources.A region may have fertile soil and a mild climate that is suitable for growing particular crops.By specializing in the production of these crops, farmers take advantage of these local characteristics.Advantages to SpecializationAs a result, each region tends to produce those goods and services it can make at the lowest opportunity cost.It sacrifices less labor and time to make those goods than it would to make their other goods.

Advantages to SpecializationBy providing just a few kinds of goods or services, producers in a region become more skilled at making them.Producers also learn how to make these goods faster and more efficiently.For example, producers in a region might invest in special tools and training to produce these goods.This helps to lower production costs even further.Part 2TradeHow Specialization Encourages TradeBecause regions specialize, they rarely produce everything they need.Instead, different regions depend on one another to supply many goods and services.They exchange these goods and servicesMerchants bring goods from one place to another, and then sell them in markets.Countries and regions thus export products they make and import from others.How Specialization Encourages TradeThere are many examples in history that illustrate how specialization leads to trade between regions.ImportsGoods from foreign countries brought into a country for use or sale.ExportsGoods and services sold from one country to other countries.

How Specialization Encourages Trade- The MayaThe ancient Maya, for example, inhabited the Yucatan Peninsula in Mexico.The salt beds that lined the coast of the Yucatan provided salt to the Maya.Salt is an important ingredient in the human diet.In addition to salt, the Maya had obsidian (volcanic glass), cacao, seashells, and pottery.

How Specialization Encourages Trade- The MayaThey exported these goods to their neighbors in the central lowlands of Guatemala.The city-states of Tikal and Copan served as major trading centers.In return, these Guatemalan city-states gave the Mayan their turquoise, jade, and quetzal (bird) feathers--- goods greatly valued by the Maya as symbols of wealth and status.

How Specialization Encourages Trade- Ancient Egypt and GreeceBecause the Egyptians could grow large amounts of wheat, they could exchange their surplus grain with other Mediterranean peoples, such as the Greeks, for olives, wine, and pottery.It was easier for the Greeks to exchange their olives, wine and pottery for Egyptian grain than it was for them to grow their own wheat on the rocky hillsides of Greece.It was also possible for these peoples to ship their products easily, since they could be carried by boat across the Mediterranean SeaHow Specialization Encourages Trade- Roman EmpireThe ancient Romans also engaged in extensive trade.Like the Greeks, the Romans shipped goods across the Mediterranean .They exported olive oil and wine from the hillsides of Italy.Sicily and North Africa grew wheat, which was shipped to Rome.

How Specialization Encourages Trade- Roman EmpireRomans also obtained marble from Greece, gold and silver from Spain, and iron from Britain.The Romans even traded along overland routes across the steppes, deserts, and mountains of Central Asia in order to obtain cotton and spices from India and silk from Han China.

The Effects of World TradeThe need to exchange goods led to the development of trade and distinct trade patterns between peoples very early in human history.Trade RoutesBecause of geographical factors, trade has often proceed along certain fixed routes--- usually along rivers, across seas, and through valleys and plains.In contrast, mountains, deserts, and dense forests often act as barriers to trade.

Trade RoutesTrade routes usually connect places with different resources or center of population.The Mediterranean Sea and the Silk Road across central Asia are two examples of trade routesLater, the Atlantic Ocean provided routes linking , Europe, Africa, and the Americas.Trade RoutesMerchants are people who buy goods to sell to others at a higher price.They risk their money to order goods they think others may want.Merchants often pay to ship goods along trade routes from one place to another in order to sell these goods at a higher price.The Growth of CitiesThe establishment of specific trade routes has often led to the growth and development of cities. Cities arise where goods are sold or where goods are unloaded to be placed onto a different type of transportation.The Growth of Cities- ExamplesAlexandriaLocated where the Nile River flows into the Mediterranean Sea, became an important Egyptian port.Merchants gathered to trade goods with merchants arriving from other places around the Mediterranean.They traded spices, textiles (cloth and clothing), silver, gold, and foods.Because merchants living in Alexandria needed food, clothing, homes and other goods, they provided work to local craftsmen.This encouraged the city to grow.The Growth of Cities- ConstantinopleAnother famous city that developed along trade routes.Located on the Black Sea, where Europe meets Asia.Traders between these two continents crossed through this city.Here, merchants exchanged European goods for Chinese silks and Asian spices.The Growth of Cities- VeniceLike other cities in Italy, Venice was situated along major trade routes for East-West trade.During the Crusades, merchants in Venice built large fleets to carry Crusaders to the Holy Land.These same fleets were later used to open new markets in the Middle East.The Growth of Cities- TimbuktuArose in West Africa north of the Niger River, on the southern edge of the Sahara.The city was an important center for the gold-salt trade.Arab traders crossed the desert to bring salt, cloth and horses.In exchange, they received gold and slaves.Under Mansa Musa, the city became a center of learning.

The Growth of Cities- European Colonial Empires and TradeAfter the European conquest of the Americas, trade routes shifted and cities closer to the Atlantic grew.Several countries established colonies in the New World.Spain, Portugal, Holland, France, and Britain are located in the western end of Europe and benefited from the rise in Atlantic trade.The Growth of Cities- European Colonial Empires and TradeCities like Lisbon in Portugal, Seville in Spain, and Amsterdam in Holland grew quickly.Merchants exchanged slaves from Africa, precious metals (silver and gold) from Mexico, sugar cane, fur, tobacco, rice and indigo (a blue dye), from the Americas, and furniture, clothes, and foodstuffs from Europe.Part 3InterdependenceThe Interdependence of RegionsOver time, specialization and trade have made different regions of the world increasingly interdependent.Regions become interdependent when they depend on each other to obtain goods and services to meet their economic needs.The Interdependence of RegionsIn ancient times, areas bordering the Mediterranean grew interdependent through trade.Under Roman rule, goods were shipped back and forth across the Mediterranean or carried to different parts of the empire along roads built by the Romans.After the fall of Rome, long-distance trade declined.

The Interdependence of RegionsBy the end of the Middle Ages, trade had revived and goods from the Middle East, India, and China found their way into the fairs and markets of Europe.

The Interdependence of RegionsIn 1492, the European encounter with the Americas greatly stimulated the rise of long-distance trade, specialization, and the interdependence of regions.New food products like the potato spread from its origins in the Andes Mtns. across the ocean to Portugal and 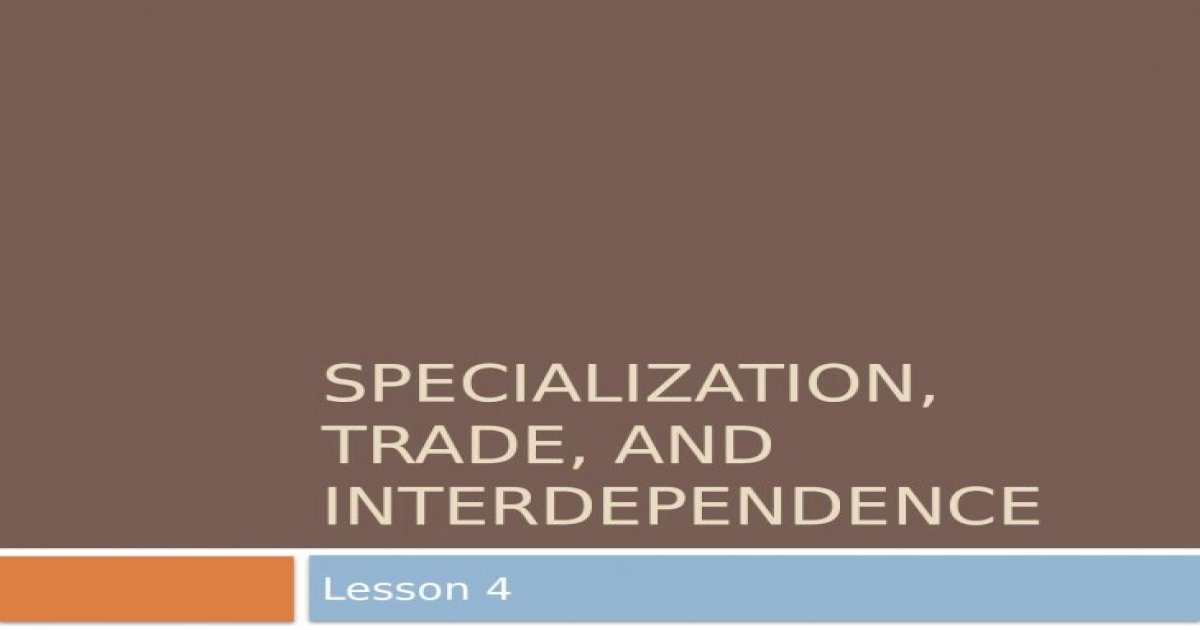 Interdependence and the Gains from Trade

Economic Interdependence, Trade, and War: A Theoretical and

Ch03 Interdependence and Gain From Trade

Specialization and Interdependence in the Colonies