interdisciplinary field of Biological Physics: a fruitful one with which to explore

the idea of Strong Emergence. Examples of emergent entities are found in: e.g.

signalling, topological interaction of DNA and topoisomerase enzymes. The flow

metaphysical question of downward causation without having to broach the

additional complexities and contested qualities of the mental.

The metaphysical discussion of causation and emergence, within the

background of polarised views between reductionism and anti-

reductionism, has remained unresolved within the last thirty yearsthe

period characterised by the works of the new-emergentists (OConnor

2015). The primary motivation of the question of causation has

historically arisen from the role of the mental in determining the future.

Those committed to one interpretation of the results of scientific

endeavour to this point in time, referred-to as the causal completeness

of the physical (CCP), arrive at the conclusion that mental events (M)

cannot be causes of physical events (P) providing that one adds to CCP:

(i) the axiom of non-over-determination (OD), and (ii) the assurance that

anti-reductionismAR) (Kim 1998). The contradiction arises because if

M and P were both causes of subsequent physical events P, and M-causes

are distinct from P-causes, then OD is immediately violated, a logic

sometimes referred to as the exclusion argument.

There seems to be much at stake in this conclusion, for if it really

implies the relegation of M-events to epiphenomena (phenomena

without causal power), there are immediate concerns, among others,

that the construction of such arguments themselves, manifestly

consisting of M-events, result purely from P-events that carry entirely

notwithstanding our everyday experience of apparent mental causation.

emergence. The idea that high-level entities (clouds, trees, bodies of

water, phase transitions, ) emerge from the concerted and collective

behaviour of low-level entities (atoms, molecules, electrons, ) is not

contested. But a reductionist view entails that these penomena are all

weakly emergent, in the sense that the future evolution of the system is

(and here it seems always necessary to insert an in principle)

molecular) and their interactions alone. M-causation (and other high-

level causation, as I argue here) however, requires morethat there are

essential for its future evolution, and whose form and evolution are not

determined entirely by the low level entities. Such strongly emergent

entities, though high-level, would from a causal perspective be as

essential as the low-level variables. A key notion underpinning both weak

and strong emergence is that of multiple realisabilitythat a given state

level states. This in turn implies a weakening of the idea of bridge laws

connecting high and low level descriptions of a system, at first sight a

strong challenge to reductionism, and constituting another contested

element in the metaphysics of causation (Gillet 2002)

otherwise of strongly emergence entities is the primary source of the

debatethe question of mental causation. However, the mental realm is,

at the very least, the most complex emergent physical system science has

yet met with. The rather minimal engagement of research programmes

in neuroscience with the metaphysical debate on emergence and

downward causation is an indicator of the difficulty faced by

as reductionism, or OD with real systems. Yet the questions begged by

the simple high-level demonstrations of metaphysics, such as the

than its continued postponement with the aspirational use of in

There is little prospect of satisfying such desirable demonstrations at

the multiple levels of the mental in the near future, but, to many

scientists, downward causation seems an ubiquitous phenomenon by no

means restricted to the mental, and amenable to an interdisciplinary

examination with philosophers within the context of far simpler systems

(Ellis 2012). At the very least, a programme of detailed work examining

the structure of emergent dynamical processes of change in complex

systems for which we do currently possess both experimental measures

at multiple scales and theoretical models predictive capacity, will aid in

making more precise the meaning of the deceptively problematic terms

cause, physical and determination. To take one example: there is a

manifest confusion in the literature between physical and micro-

physical or atomistic, an assumption, in other words, that physics is

restricted to one particular level in spatial (or equivalently energetic)

scale. Yet as Anderson pointed out long ago (Anderson 1972), physics,

and physical processes, are as much concerned with multi-level and

inter-level processes, including the emergence of coarse-grained

variables that act determinatively, as on microscopic phenomena. A

more embracing and less oppositional formulation of emergence that

contextual emergence of Silberstein and Bishop (2016).

relatively newly-defined field of biological physics. The term marks the

profound engagement of biology and physics to mutual and

physiology (Morange and Cobb 1998), the introduction of counter-factual

thinking into biology by Schrdinger in his early foray What is Life?

(Schrdinger 1944) and, most notably, the development of X-ray

The latest phase of interdisciplinary engagement has been driven

from a collective phenomenon within the discipline of physics itselfthe

state materials physics for which the correlation of electron wave-

functions is the dominant feature (so applying metals, semiconductors,

paradigm for soft materials in which (approximate) thermal

equilibrium is the dominant paradigm (exemplified by gels, rubbers,

and research programme had been establishedone that unified the

especially in Europe and the USA, began to work intensively on biological

systems. For, if the structures of living systems are largely based, at the

Golgi apparatus, ) then the methods and insights from the soft matter

physical constraints under which they must work in biological contexts.

On the other hand, it is also perfectly possible that the highly evolved

and specific nature of biological macromolecules, together with the 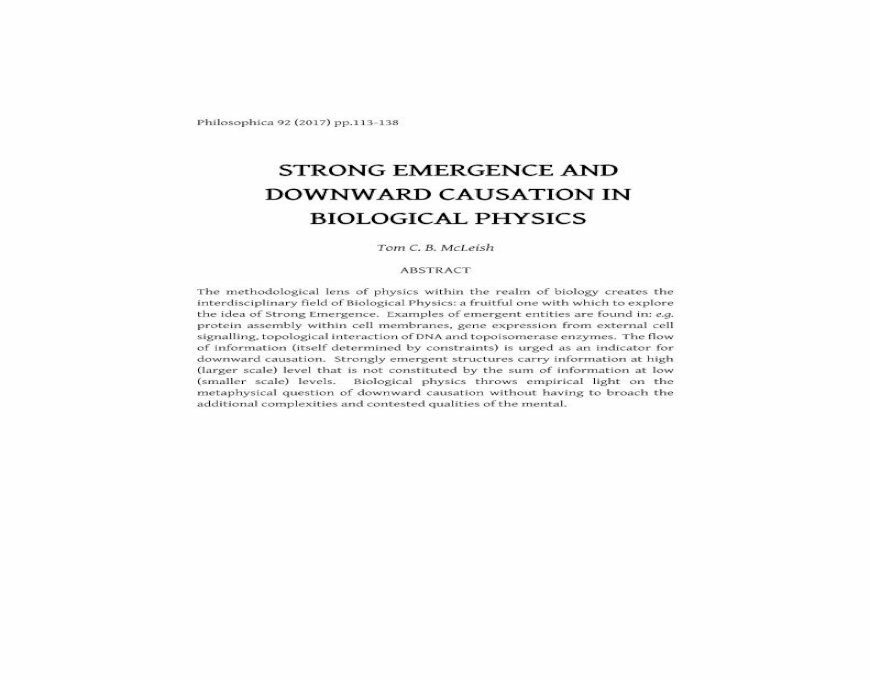