Synthesis of Benzene Derivatives: Electrophilic Aromatic Substitution 15-8 Benzene undergoes substitution reactions with electrophiles. Electrophiles attack benzene by substituting for a hydrogen atom, not addition to the ring. Under the conditions of this type of reaction, ordinary non-aromatic conjugated polyenes would polymerize rapidly. Slide 2 Electrophilic aromatic substitution in benzene proceeds by addition of the electrophile followed by proton loss. Electrophylic aromatic substitution is a two-step process. The cationic intermediate is resonance-stabilized: The initial attack of the electrophile is endothermic because the sp 3 carbon generated interrupts the cyclic conjugation. The transition state is not aromatic. The loss of the proton regenerates the sp 2 carbon atom and aromaticity is restored. This process is more favored than the nucleophilic trapping by the anion accompanying E +. Slide 3 The overall reaction is exothermic because the bonds formed are stronger than the bonds broken. Slide 4 Halogenation of Benzene: the Need for a Catalyst 15-9 Benzene in normally unreactive to halogens because they are not electronegative enough to disrupt its aromaticity. Halogens can be activated by Lewis acid catalysts, however, such as ferric halides (FeX 3 ) or aluminum halides (AlX 3 ), to become much more powerful electrophiles. Slide 5 This activated bromine complex can attack the benzene molecule, allowing the other bromine atom to depart with the good leaving group FeBr 4 - The FeBr 4 - next abstracts a proton from the cyclohexadienyl cation intermediate, and in the process regenerates the original FeBr 3 catalyst. Slide 6 Bond energy calculations show that the electrophilic bromination of benzene is exothermic: Phenyl-H+112 kcal mol -1 Br-Br +46 kcal mol -1 Phenyl-Br -81 kcal mol -1 H-Br -87.5 kcal mol -1 --------------------------------------------------------- Reaction -10.5 kcal mol -1 Fluorination of benzene is very exothermic (explosive). Chlorination and bromination require an activating catalyst. Iodination is endothermic and does not occur. Slide 7 Nitration and Sulfonation of Benzene 15-10 Benzene is subject to electrophilic attack by the nitronium ion. Benzene can be attacked by concentrated nitric acid in the presence of concentrated sulfuric acid. Slide 8 The purpose of the sulfuric acid is to generate the more electrophilic nitronium ion: The nitronium ion subsequently attacks the benzene molecule: Slide 9 Aromatic nitration is the best way to introduce nitrogen-containing substituents into the benzene ring. The aromatic nitro group serves as a directing group in further substitutions and as a masked amino function. Slide 10 Sulfonation is reversible. Fuming sulfuric acid (8% SO 3 in concentrated H 2 SO 4 ) reacts with benzene to form benzenesulfonic acid. Slide 11 Because the reaction of SO 3 with water is so exothermic, the sulfonation of benzene can be reversed by heating benzenesulfonic acid in dilute aqueous acid. Because sulfonation is reversible, it can be used as a blocking group to control further aromatic substitution and then later removed. Slide 12 Benzenesulfonic acids have important uses. Long chain-branched alkylbenzenes can be sulfonated to the corresponding sulfonic acids. After conversion to their sodium salts, these compounds can be used as synthetic detergents. Sulfonate detergents have now been replaced by more biologically friendly, biodegradable detergents. Sulfonation is often used to impart water solubility to organic compounds, as in the manufacture of certain dyes. 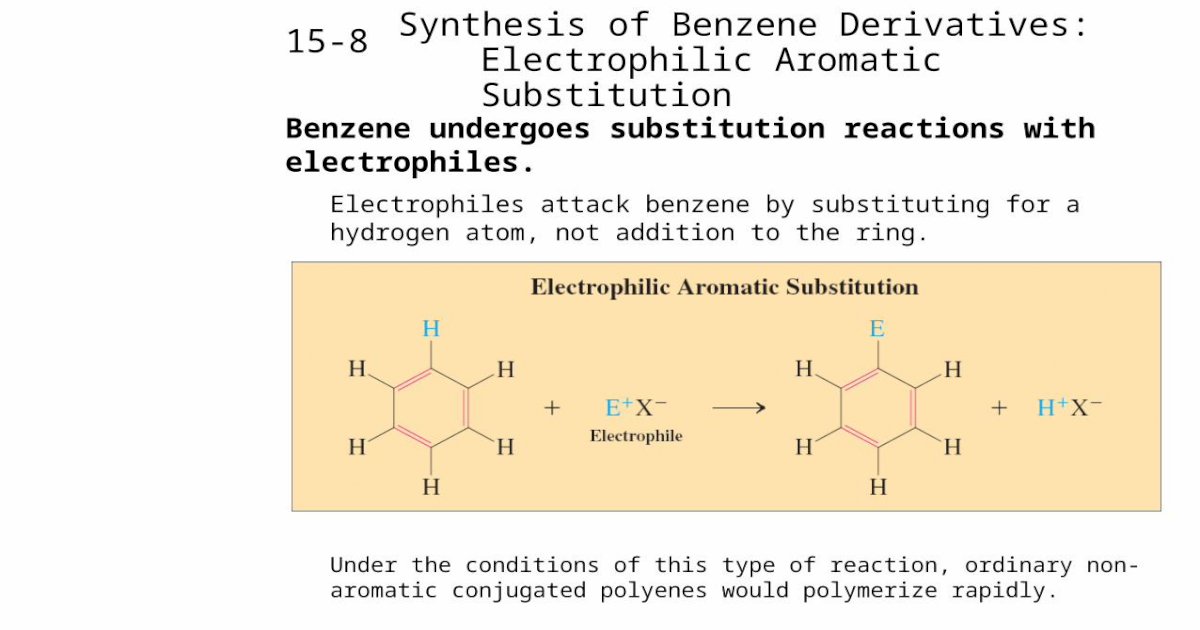 Oregon Board of Pharmacy BOARD MEETING AGENDA Meeting ... diazepine or benzene ring, any substitution(s)