2. STRIO ALBUM DIGIPACK 3. We challenged a typical star image by only putting a smallimage of the artist on the cover. We found that with electronicdance music (EDM) artists, the logo was more important than arecognizable face. We based this on other similar artists of thesame music genre, such as: Knife Party, Pendulum and FeedMe. Similar to them, we didnt use a main logo instead of alarge picture of an artist, which is a common convention of popartists such as One Direction and Justin Bieber. Like othersimilar artists, we kept the colours of the album cover quitebasic. The main image is black and white but there is anelement of neon colours used, to attract the buyers eye andmake the cover stand out. There is also a Parents advisorysticker on the album cover, clearly demonstrating the age groupof our target audience and sets the tone of the music. Thereare a lot of collaborations with other artists of the same genreof music in the album. This was a common convention of otherartists as the 21st century music industry relies heavily oncollaborations of artists. 4. OFFICIAL STRIO WEBSITEThe website is designed in the same way as the albumcover. You are immediately greeted with the logo ofthe star image (which is shown in the same design ason the album cover). There is also an image of theartist playing live. We used a lot of images of the artistat performances because this is a large attraction tofans of the dubstep genre. It sets the scene for theartist and shows him at his ideal environment. For thisreason we also designed tour dates for the artist andto get the audience involved we set up a twitteraccount. There are also hash tags on the website, toget the audience involved and encourage them to SOCIAL NETWORKING LINKStweet and upload images of the performances. This isalso a similar feature of similar artists such as SwedishHouse Mafia, as there website is presented to theaudience in the same way. The colour scheme of thewebsite is in the same style as the album cover. Mostlyblack and white but with an element of neon colour, tograb attention. We also added a store section on thewebsite, which encourages branding of the star image. 5. Our music video relied heavily on a narrative,OUR STRIO VIDEOhowever there were also cuts in to a performanceelement from the artist. This was a common style ofother artists of a similar genre. Most dubstep musicdoes not involve lyrics, which limits the amount ofperformance you can have in the video without itbecoming repetitive. This is why a narrative is useful,to keep the audience engaged. Our performanceelement included a DJ set in the studio, this is atypical convention of this genre of music. Lighting anda smoke machine helped create an energeticatmosphere and the idea of a live performance. Weused a lot of wide shots when in the studio with theartist, which clearly established a typical liveperformance set up. We also used an image of asmiley face a lot in the video. This linked theperformance and the narrative together between SIMILAR ARTIST FEED ME VIDEOcuts. This also helped build a logo for the DJ, as it is acommon logo on merchandise on the website. Ournarrative involved an unlikely hero who was once avictim of bullying but seeks revenge. This heavilyinvolved the idea of superheros. This is a concept thatattracts our target audience and is similar to a similarartist, Feed Mes video. The music video clearlyshowed the DJ in his element, a live performance. 6. YOUTUBE AUDIENCE FEEDBACKTWITTER FEEDRichard Dyers theory believes that the star image is made up of a range of meanings, which areattractive to the target audiences. One paradox of his theory is that the star has to be simultaneouslyordinary and extraordinary for their target audience, this is what makes the audiences interested in thestar. The 2nd paradox is that the star must be simultaneously present and absent for the consumer. Forour artist this still applies. The DJ is ordinary in the sense that he is not that concerned with hisappearance, which is clear from the fact he is not the main image on the album cover or website ormusic video. However many of the images on the website show him playing in front of large crowds,making him seem less normal and more extraordinary. This makes the audience appreciate his talentbut at the same time feels like they can aspire to be him. Our artist is present in the form of onlinemedia (through twitter, YouTube, his website and on tour) however he is also absent as he is not alwaysavailable. 7. The website, music video and CD cover accumulateto create a star image for the artist. All attract theaudience and clearly explain the type of music andtype of artist DJ Strio is. It creates a branding imageand a name for the artist in the real world and in theonline media. Which can lead to a group of fans,physically and over the internet. The online mediaattached to the DJ allows us to reach a worldwideaudience that otherwise we wouldnt have been ableto communicate with. The research and use ofancillary texts has allowed us to be creative bytranslating and adapting existing products to makeour main product, using social networking todistribute as well as promote our work. 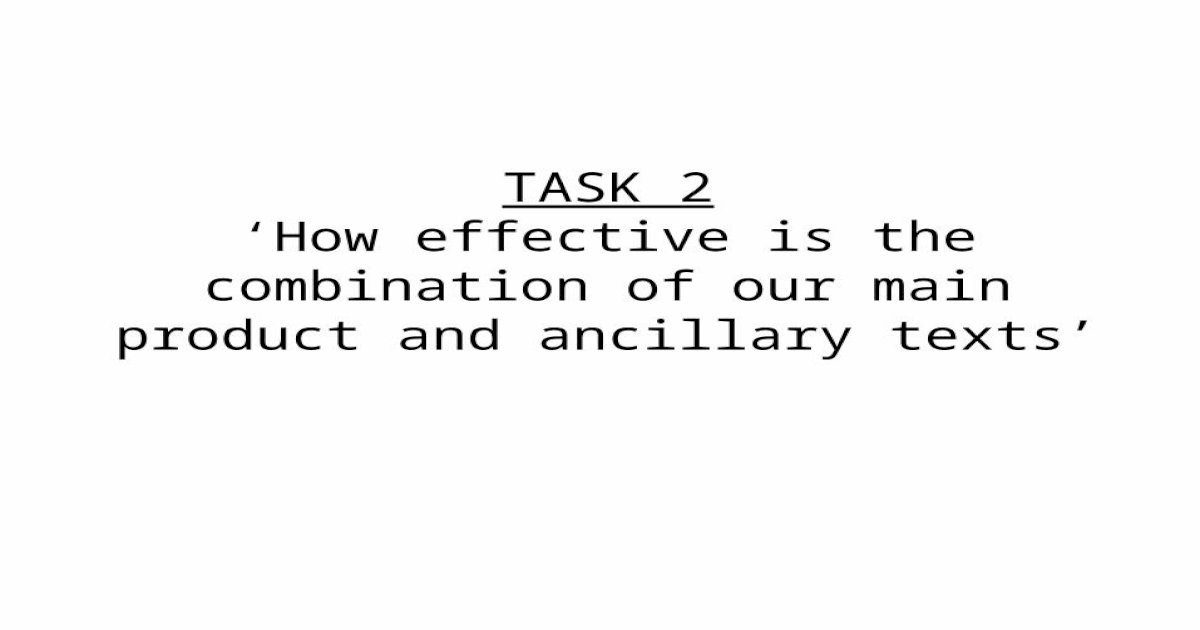