This proposed acquisition represents a defining moment for Tata Steel and is entirely consistent with our strategy of growth through international expansion. orus and Tata Steel are companies with long, proud histories. We have compatible cultures of commitment to stakeholders and complementary strengths in technology, efficiency, product mix and geographical spread. Together we will be even better equipped to remain at the leading edge of the fast changing steel industry.

This offer from Tata Steel reflects the substantial value created for orus shareholders since the placing and open offer and launch of our Restoring Success programme in 2003. In the middle of last year, my board agreed a strategic way forward for orus to seek access to low cost production and high growth markets. onsistent with this, the ompany held talks with a number of parties from Brazil, Russia and India. This transaction represents the culmination of these talks. This combination with Tata, for orus shareholders and employees alike, represents the right partner at the right time at the right price and on the right terms. This creates a well balanced company, strategically well placed to compete in an increasingly competitive global environment.

merged entity, Tata-Corus employed 44000 people across 45 countries in the world. It had the capacity to produce 28.1million tons of steel per annum, making it the sixth largest steel producer in the world as of early 2007

, an auction was initiated on January 31st 2007 , and after nine rounds of bidding , Tata steel could finally clinch the deal with its final bid 608 pence per share, almost 34% higher than the first bid of 455 pence per share. Many analysts and Industry experts felt that the acquisition deal was rather expensive for Tata Steel and this move overvalue the steel industry world over. Finally

steel is a part of the Tata Group,One of the largest diversified business conglomerates in India.

company produced around 5 million tonnes of crude steel in 2007.

presence in over 50 developed

56th producers in the world before

Acquisition and ranked 5th after acquisition, with an annual crude steel production capacity of 28 Million Tonnes Per Annum (MTPA).

of the lowest cost producers of steel

in the world. Strong

retail and distribution network in

Formed on 6th Oct 1999, through merger of 2 companies : British Steel and Koninklijke Hoogovens

Corus has manufacturing operations in many countries with major plants located in the UK, The Netherlands, Germany, France, Norway and Belgium

The company produced around 18 million tonnes of crude steel in 2005.

offices/service centres in over 40 countries

to many of the most demanding markets worldwide including construction, automotive, packaging, engineering

was acquired by Tata Steel in 2007 and is now part of Tata Steel Group, which is the 6th largest global steel producer

tap European Mature Market. of acquisition is lower than setting up of

TATA to feature in Top 10

holds number of patents and

powerful combination of low cost upstream production in India with the high end downstream processing facilities of Corus will improve the competitiveness of the European operations of Corus significantly. The combination will also allow the crossfertilization of R & capabilities in the automotive, packaging and construction sectors and there will be a transfer, from Europe to India, of technology, best practices and expertise of senior Corus management. The

enterprise value of Corus including debt and other cost was estimated at US $ 13.7 billion

Steel decided to go in for an all cash deal rather than opting for a share swap As per the acquisition plan a special purpose vehicle, a wholly owned subsidiary, called Tata Steel UK would be set up by Tata Steel. Tata

raise the require funds , Tata Steel opted for for a mix of debt (US $6.14 Billion ) and equity ( US $ 7.56) It was planned that the acquisition would be completed through Tata Steels UK special purpose vehicle (SPV) named Tata Steel UK Tata steel UK planned to raise US $6.14 Billion through a mix of high yield mezzanine and long term debt funding . Most of these loans were secured by the cash flows and assets of Corus. To

provide for immediate funding of the acquisition , Tata Steels Singapore SPV raised US $ 2.66 billion through bridge loans Banks like ABN Amro , eutsche Bank , Lloyds and Standard Chartered bank , agreed to provide bridge loans to the company. Tata steels own contribution in the Corus deal amounted to US $ 4.9 billion . To

EBITDA can be used to analyze and compare profitability between companies and industries because it eliminates the effects of Financing and accounting decisions. EBITDA

is not affected by the capital structure of

have a transnational comparison in our case and

Mittal Steel Acquired at an EBITDA of 4.5 times, The point is Arcelor has much superior assets, wider market reach and financially stronger than Corus

history of Corus can be traced back to the early 20th century when it was founded by the Government of Netherlands in The Hauge on September 20,1918. On October 1999 the company merged with British Steel to form Corus Group, the worlds third largest Steel producer during that time. In 2006, Corus reported an annual turn over of pound 9 billion. The company had four divisions-Almunium,Distribution & Building products,Long products& Strip products. The

debate whether Tata Steel has overpaid for acquiring Corus is most likely to be certain, since just based on the numbers alone it turns out that at the end of the bidding conflict with CSN Tata ended up paying approximately 68% above the average price of Corusshares.

Nonrecourse debt or a nonrecourse loan is a secured loan (debt) that is secured by a pledge of collateral, typically real property, but for which the borrower is not personally liable. If the borrower defaults, the lender/issuer can seize the collateral, but the lender's recovery is limited to the collateral. If the property is insufficient to cover the outstanding loan balance (for example, if real estate prices have dropped), the difference between the value of the collateral and the loan value becomes a loss for the lender. Thus, non-recourse debt is typically limited to 50% or 60% loan-to-value ratios, so that the property itself provides "overcollateralization" of the loan.

specialized form of private equity, characterized chiefly by use of subordinated debt, or preferred stock with an equity kicker

Subordinated debt has a lower priority. Because subordinated debt is repayable after other debts have been paid, they are more risky for the lender of the money. Subordinated loans typically have a higher rate of return than senior debt due to the increased inherent risk.

During the year, the Company completed the long term financing programme for the Corus acquisition. Of the total Enterprise Value of USD 14.2 billion, at the close of the Corus acquisition process on April 2, 2007, the financing included around USD 10.5 billion as bridge funding, the balance being applied out of Tata Steels own cash and borrowings. Despite very volatile credit markets globally, the company raised around USD 6.2 billion of term debt with an average life of around 5 years at very competitive terms.

debt being non - recourse in nature was determined based on the cash flow servicing capability of our European operations and will be serviced by the Tata Steel UK (Corus) cash flows. The syndication of the above debt was completed during the year with more than 25 banks and institutions participating in the process. This

On the equity side, Tata Steel raised around USD 2.27 billion (Rs. 9,120 crores)of equity and convertible preference shares on a rights basis. The Company further raised around USD 875 million in Convertible Alternate Reference Securities (CARS) which is a 5 years convertible instrument with a coupon of 1% and a conversion premium of 35% to the prevailing market price in August 2007. As a result of the above, your Company raised around USD 10 billion during the year and completed the long term fi nancing for the Corus acquisition

steel group results were enhanced by dramatic turnaround in the performance TS Europe , which reported a positive EBIDTA of Rs 2303 crores in H2 FY10 compared to an EBIDTA loss in H1 FY10 of Rs 3655 crores

AMOUNT (in US $ Billion)

Break-up of Tata Steel Equity Contribution in US Million

It's useful for transnational comparisons because it ignores the distorting effects of individual countries' taxation policies. 2) It's used to find attractive takeover candidates. Enterprise value is a better metric than market cap for takeovers. It takes into account the debt which the acquirer will have to assume. Therefore, a company with a low enterprise multiple can be viewed as a good takeover candidate. 1)

is an alloy of iron and carbon Important engineering and construction material in the world Used in every aspect of our lives Steel is made via one of two basic routes: Integrated (blast furnace and basic oxygen furnace). Electric arc furnace (EAF).

integrated route uses raw materials (that is, iron ore, limestone and coke) and scrap to create steel. The EAF method uses scrap as its principal input. Of the steel produced in 2005, 65.4% was produced via the integrated route, 31.7% via EAF and 2.9% via the other methods. The

a steel mill, the crude steel production process turns molten steel into ingots, blooms, billets or slabs. These are called semi-finished products. Typically, it takes 1.5 tons of iron ore and about 450kg of coke to produce a ton of pig iron, Finished steel products are forged from semifinished products At 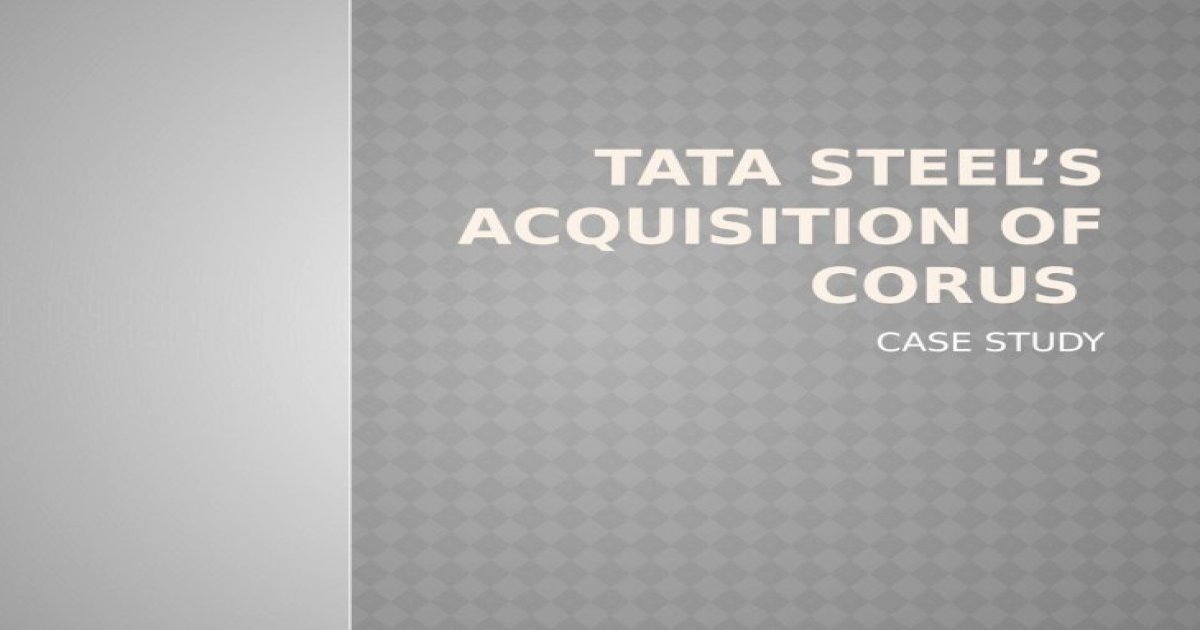