Home >Documents >The Beacon - Welcome to Beacon.pdf · PDF file 1 The Beacon The Beacon is a large house...

The Beacon - Welcome to Beacon.pdf · PDF file 1 The Beacon The Beacon is a large house...

The Beacon The Beacon is a large house situated between Beacon Road and Beacon Lane and has been owned at times by some of the most influential residents of Kingswear. There is a lighthouse, or beacon, a short distance away acting as a leading light to the entrance of Dartmouth Harbour and probably accounts for the name of the roads and the house.

The above photograph shows the present Beacon house. The tower on the right is the foundation of the 1864 navigation beacon, now reconstructed on a rock further down the beach.

Figure 2 shows a panoramic view contained in an Admiralty chart of Dartmouth Harbour dating from 1853 but with corrections up to 1880. It shows both a lighthouse and a separate mast light immediately below the house.

Governor Holdsworth bought the land in 1845 and built the house shortly after. Arthur Howe Holdsworth was a Member of Parliament and Governor of Kingswear Castle and a very influential person in the area. He lived in The Beacon until 1857 when he moved back to his family home at Stokenham where he died in 1860.

In November 1855 the Dartmouth Chronicle recorded the death of a Capt Justice R.N. aged 63, at The Beacon and in June 1858 the house was put up for sale to be bought by Mr T Lovett-Prinsep who was to become another local worthy. The 1861 census records two servants also living there, Mary Salter aged 47 and Emma Martin aged 16. In the June 1861 edition of the Dartmouth Chronicle reported that the Beacon had been let to Miss Domville. The entry continues that numerous enquiries for detached houses having communication with the river side have been made, and it is to be regretted that no efforts are made to supply the great want of residences of this description.

An indenture dated 29 May 1867 records the sale and transfer of some nearby land by the trustees of Church Lands Property. The map accompanying the sale is shown in figure 3. The trustees associated with the sale included the Rev John Smart, the perpetual curate of Kingswear; Arthur Bastard Eastabrooke Holdsworth (son and heir of Governor Holdsworth), whose address was recorded as Widdicombe House in Stokenham, Percy Hockin of Dartmouth, Charles Nelson of Kingswear and William Paige of Hoodown then in the parish of Brixham. The recipients were Henry Fownes Lutterell of Dunster Castle in Somerset and George Fownes Lutterell of Woodlands also in Somerset. The sale involved the transfer of the sites shown red in figure 3 in exchange for 322. In addition the Lutterells would transfer to Percy Hockin the area of land coloured blue. Percy Hockin was a local Dartmouth solicitor who, in the Post Office Directory of 1861, is listed as living at Nethway. He was also chairman of the Kingswear Parish Meeting and it was his task, following the Local Government Act of 1894, to call the first Kingswear Parish Council Meeting for the 7th January 1895.

The Tithe Commutation Act of 1838 resulted in the detailed mapping of Kingswear in 1840 in which each plot of land was numbered. Part of the Tithe Map is shown later in this paper in Figure 7. For many years the tithe map of Kingswear provided a convenient way of identifying plots of land when buying and selling. In the case of the above indenture the land transferred to the Lutterells at the site of The Beacon is numbered 79 and 85. That land passed to Mr Hockin is number 91.

Three days later, on the 1st June 1867 there was another indenture in which the two Lutterells sold land to Theophilus Levett of Bovey Tracy and Caroline Mary Levett-Prinsep of The Beacon, Kingswear for 2000. The land involved in this sale include the sites 79 and 85 on the sale to the Lutterells three days earlier as well as three other sites, 87, 88 and 89 already owned by the Lutterells. These are shown in red and blue respectively on the sale plan figure 4. Included in the indenture was the transfer of the plot 75, uncoloured in figure 4, to the Lutterells. This latter plot was included in the Lutterell sale of 1874.

There is a memorial plaque made of Ashburton marble in Kingswear Church to Caroline Levett-Prinsep, see figure 6, and shows that she died later the same year. Mrs Levett-Prinsep was the sister of James Temple who in 1792 built Stover House (now a preparatory school), the Stover Canal and the Haytor Granite Railway which brought granite from Dartmoor for the building of London Bridge and the Houses of Parliament

Another sale is recorded on the 15th April 1869. This time a Charles Henry Roope, of Moorgate Street in the City of London, sold plot 93 to Thomas Levett-Prinsep of The Beacon. Charles Roope was the son and heir of Roope Harris Roope late of Kingswear. The location of plot 93 can be seen in figure 4 to the right of plots 79 and 88 and extends the full way between the two roads. Although other houses are shown on the maps, including the one accompanying the 1869 sale, the location of The Beacon is not shown.

Of the same date as the above a Deed Poll is recorded with the accompanying map shown in figure 5. The reason for the Deed Poll, by Thomas Levett-Prinsep, Esq., is not clear as its only statement is to enlarge a term of Five Thousand years in Lower Foxhole Garden, Kingswear, Devon, into a fee simple.

A year after the death of Caroline, Thomas married Georgina Holdsworth, a member of the family which originally built The Beacon. The same year the Dartmouth Chronicle records a sad occasion on the 19th April 1869 premature birth of a daughter, Margarita, who died two days later.

The Levett-Prinseps moved back to their estate at Croxall Hall in Derbyshire and in April 1871 the Dartmouth Chronicle reported that:

The delightful residence known as The Beacon has been taken by G.F Freke for a term of 7 years

In July 1877 the Levett-Prinseps returned and had another daughter born at house.

In July 1880 the Chronicle reported that, whilst on a visit to Kingswear, the Rev F Fenwick Reevely, of West Lexham Rectory, was nominated by the Crown for the living of Kingswear, vacant by the death of the Rev John Smart. It stated that earlier Mr Reevely had married Miss Domville whose family owned the Beacon, previous to its purchase by Mrs Prinsep. For some reason Mr Reevely did not take up his post, or not for very long, as the new vicar was in fact a Rev Frederick Walker, late curate of Longeaton in Derbyshire.

In 1881 there was another census and the inhabitants of The Beacon are listed as: John B Hayes, 32, born in Arborfield, Berkshire and lately captain 12th Royal Lancers. His wife Julia A, 32, born at Clapham. Their two daughters Annie E aged 1 year and Lucy J aged 10 months both born in London. Nurse Ellen Evans, 28, born in Exeter. Parlour maid Annie Colper, 22, born in Wexford, Ireland. Cook Elizabeth Jurney born in Ross, Herefordshire.

In April 1883 the Chronicle reported that Capt Hayes had bought The Beacon from Mr Levett Prinsep. Then in February 1884 that he had

offered his fine iron steam yacht Lancer to the Government for service in Egypt. However in November 1884 the Chronicle reported his death from pneumonia. The obituary records

the decease of Capt. Hayes late the 12th lancers at the early age of 35. Capt. Hayes about three years since purchased of T.L. Prinsep Esq. the charming residence known as the Beacon, which he enlarged and considerably improved. The deceased was an enthusiastic yachtsman and by his courtesy was a general favourite. He leaves a wife and a family of three daughters. The remains will be interred at Aborfield near reading, the seat of his father, the Rev Sir John Hayes Bart. The body will leave the house tomorrow at 8 oclock enclosed in three coffins the outside being of polished oak with brass mountings and breastplate and the funeral arrangements are under the management of Messrs T.S. Lovell and Son, Duke Street.

The Dartmouth Chronicle of 6th August 1886 reports an INTERESTING FIND The Gardener at the Beacon, Kingswear, when digging last week, discovered a most interesting coin of the second century. It is inscribed V. T. Commodius, who by reference to Gibbon, reigned in A. D. 180. On the reverse a spread Eagle. This establishes the fact that the Romans must have had some connection with Kingswear about the above named date.

Who owned The Beacon at this time is not clear but in July 1887 it is reported that The tender by Mr F Matthews, builder, St Marychurch has been accepted, for the additions to be carried out at the Beacon, the residence of Lieut-Colonel Daubeny. The additions include an entrance hall 14ft by 13ft; dinning room 36ft. by 18ft; two bedrooms, bath room, lavatory, etc. Mr H Winsor of Dartmouth and Mr H Matthews of Paignton were next lowest competitors. The additions being from plans of Mr E Appleton of Kingswear and Torquay.

Mr Edward Appleton was also the architect overseeing the rebuilding of the Kingswear Church, St Thomas of Canterbury in 1845.

A Fashionable Wedding at Kingswear is reported on 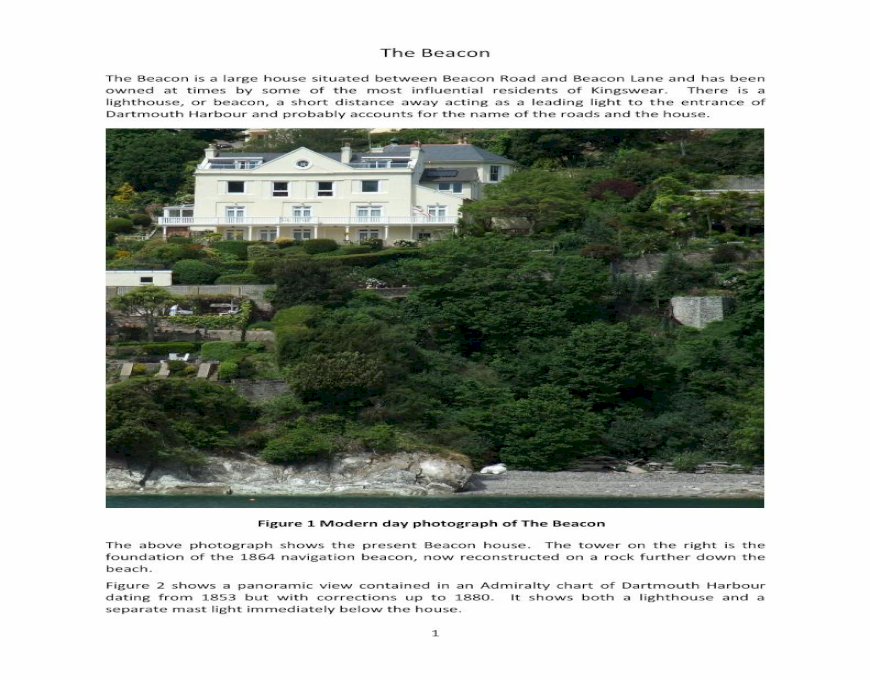 Hepaticae from Truk, Caroline The Truk Islands are situated within a large lagoon formed by an extensive

Developing a Trustworthy Randomness Beacon for the Public our beacon, detailing how the beacon should