The Effect of Takeovers on the Fundamental Value of Acquirers

1. IntroductionFrom the perspective of acquiring firms, a question of paramount importance is whether the present value of the financial benefits from an acquisition is greater than the present value of the costs. In other words, is the acquisition a positive net present value investment? If it is, then the fundamental value of the acquiring firm should increase following acquisition, hence creating value for acquirer shareholders. According to financial theory, this is a key criterion that acquirers should apply and, apparently, a method that many finance executives of acquiring companies do apply (Graham and Harvey, 2001). There is a vast research literature on the financial effects of takeover, which has primarily employed two distinct methodologies. Profitability studies compare the post-acquisition performance of the acquiring firm with the pre-acquisition performance of the acquiring and acquired firm. Share return event studies examine the share price impact of the acquisition on the acquired and acquiring firms. In addressing the specific question of whether the acquisition is a positive net present value investment and increases the fijndamental value of the acquirer, both methods have drawbacks.*Tfie first author is from Birkbeck College, London and the second and third authors are from the Stockholm School of Economics Research Institute, Stockholm, Sweden. They are grateful to two anonymous referees, the editor (Pauline Weetman), Robin Chatterjee, Robert Conn, Andy Cosh, Alan Hughes and Sudi Sudarsanam for insightfiil and helpful comments. Correspondence should be addressed to: Paul Guest, Birkbeck College, Malet Street, London WCIE 7HX. E-mail: [email protected] This paper was accepted for publication in September 2009.

Profitability studies are not designed to address this question and hence do not account for crucial aspects such as the timing of profits earned, or the amount paid for the target company. Share return studies examine the impact of an acquisition on the acquirer's share price at announcement, but the impact on share price may be very different from the impact on fiindamental value. For example, an acquisition may be a positive net present value investment but not to the extent that the market expected, and hence share price may fall despite the acquirer's fundamental value increasing. In this paper we develop an alternative methodology to address the impact of acquisitions on the fiindamental value of acquirers, and test it on a sample of acquiring firms. Our approach is based on the residual income approach to fiandamental valuation. In recent years accounting research has reexplored fundamental approaches to corporate valuation and models based on residual income have attained a widespread use (e.g. Lee, 1999). We use the residual income approach to estimate the fiindamental value of acquirers before acquisition and compare this valuation with their fiindamental value following the acquisition. If takeovers create fundamental value for acquiring firms, then the latter should be greater than the former. Our approach provides an alternative methodology that avoids some of the weaknesses of profit and share return studies in addressing this specific issue. However, it is important to note that it shares some weaknesses and has its own separate weaknesses, which we discuss below. We apply the residual income methodology to a sample of 303 domestic UK acquisitions involving public companies. We compare the results of this

approach with the effects of takeover on profitability and short-and long-run share returns. We find that the impact of acquisition on fiindamental value is insignificantly negative. This result differs markedly fi-om the effect of takeover on profitability, which is significantly positive, and the effect of takeover on share returns, which is significantly negative. Although acquirers improve their profitability, this does not result in a significant increase in fundamental value. The main contribution of this study is to use an established valuation technique to develop a new methodology for measuring the performance of acquiring firms. The paper is organised as follows: The next section reviews the empirical literature on acquisition performance, and discusses why existing methods may not adequately measure the impact on fiandamental value. Section 3 describes the sample. Section 4 describes the methodology. Section 5 reports the results from the empirical analysis and Section 6 concludes.

2. Literature reviewIn this section we consider what the existing empirical literature on acquisitions tells us about the effect of takeovers on fundamental value. In Section 2.1 we examine profitability studies and in Section 2.2 we consider the event study literature. 2.1. Profitability studies The objective of profitability studies is to examine whether an acquisition improves the profitability of the combined assets of the acquirer and acquiree. The approach examines the difference between the post-acquisition performance of the acquirer (which includes the acquiree post-acquisition) and the preacquisition combined (weighted average) performance of the acquirer and acquiree. It then compares this difference with a benchmark based on, for example, control firms matched by industry and size. The evidence for the UK appears to depend on the sample period. For studies covering the 1960s and 1970s, some studies (Meeks, 1977; Chatteijee and Meeks, 1996) find little evidence of improved profitability, whilst others (Cosh et al., 1980) find evidence of significant improvements. However, studies for the 1980s and 1990s consistently find evidence of significant improvements in performance (Chatterjee and Meeks, 1996; Manson et al., 1994; Manson et al., 2000; Powell and Stark, 2005 and Cosh et al., 2006).' The methodology of profitability studies is not'For reviews, see Hughes (1989), Tuch and O'Sullivan (2007) and Martynova and Renneboog (2008).

A rare exception would be where the acquisition is paid for from the acquirer's cash reserves. In this case, removing goodwill would result in the combined assets being lower following acquisition, and therefore removal of goodwill will cause a positive bias to the impact of takeover on profitability. 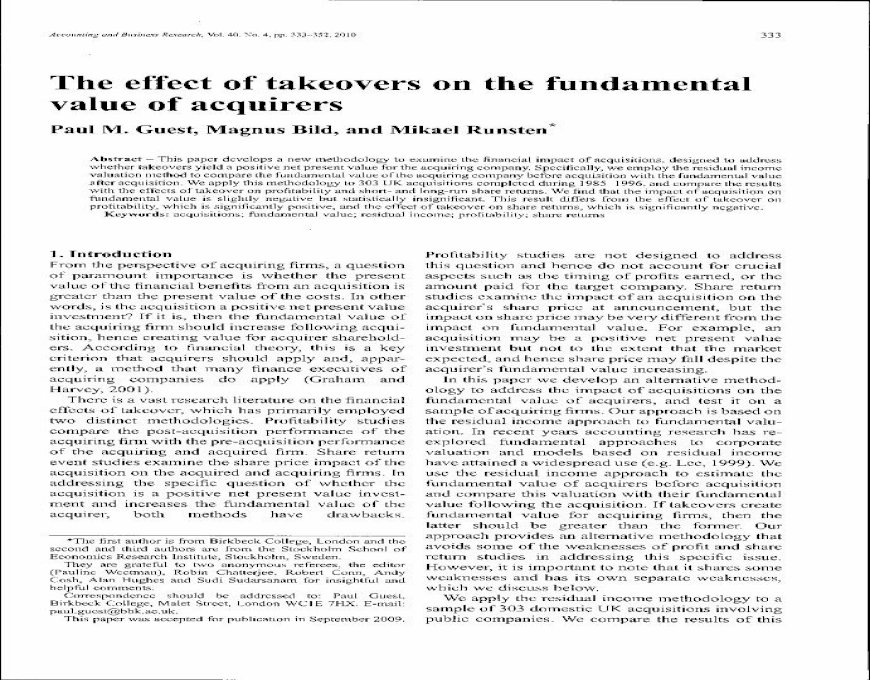 Who Gets What? Shareholder Value of Acquirers and Targets ... Indian Takeovers 1. Introduction India