The online version of this article, along with updated information and services, can be found online at: http://ptjournal.apta.org/content/83/5/455 Collections This article, along with others on similar topics, appears in the following collection(s): Clinical Decision Making Diagnosis/Prognosis: Other Perspectives To submit an e-Letter on this article, click here or click on "Submit a response" in the right-hand menu under "Responses" in the online version of this article. Sign up here to receive free e-mail alerts

The Hypothesis-Oriented Algorithm for Clinicians II (HOAC II): A Guide for Patient ManagementIn this era of health care accountability, a need exists for a new decision-making and documentation guide in physical therapy. The original Hypothesis-Oriented Algorithm for Clinicians (HOAC) provided clinicians and students with a framework for science-based clinical practice and focused on the remediation of functional deficits and how changes in impairments related to these deficits. The HOAC II was designed to address shortcomings in the original HOAC and be more compatible with contemporary practice, including the Guide to Physical Therapist Practice. Disablement terminology is used in the HOAC II to guide clinicians and students when documenting patient care and incorporating evidence into practice. The HOAC II, like the HOAC, can be applied to a patient regardless of age or disorder and allows for identification of problems by physical therapists when patients are not able to communicate their problems. A feature of the HOAC II that was lacking in the original algorithm is the concept of prevention and how to justify and document interventions directed at prevention. [Rothstein JM, Echternach JL, Riddle DL. The HypothesisOriented Algorithm for Clinicians II (HOAC II): a guide for patient management. Phys Ther. 2003;83:455 470.]

The HOAC II is a revised algorithm

n 1986, Rothstein and Echternach1 published a clinical decision and documentation guide called the Hypothesis-Oriented Algorithm for Clinicians (HOAC), which they contended offered clinicians a pragmatic, scientifically credible approach to patient management. Since that algorithm was first published, radical changes have occurred in the health care system. For example, there is now widespread discussion of the importance of physical therapists making diagnoses,2 and there is also general acceptance of the need to view patients and clients within the context of one of the disability models.3,4 In addition, therapists often have to relate to practice guides and guidelines.5 We argue that what is needed is a patient management system that involves the patient in decision making and can be used to provide payers with better justifications for interventions, including occasions when therapists may disagree with practice guidelines. Compatibility with the Guide to Physical Therapist Practices (Guides) patient management model, including the formulation of diagnoses, is also desirable.6

designed to meet the needs of contemporary practice.addressing goals noted by someone other than the patient. The focus on patient-centered outcomes was, however, an innovation in HOAC and laid a foundation for the implementation of the HOAC in clinical decision making in the context of currently used disability models. The disablement model that we believe currently offers the greatest utility for clinical practice is the Nagi model.7(pp223241) A common element in both the old and new versions of the HOAC is that therapists using the terms of the Nagi model are called upon to identify impairments, when appropriate; to examine how these impairments relate to functional deficits; and to examine whether interventions designed to ameliorate or reduce impairments result in changes in function and changes in levels of disability. In some cases, therapists also can hypothesize that factors other than impairments may lead to functional loss. For example, a societal limitation such as high curbs may contribute to a patients inability to walk to school. We also believe therapists have a role in prevention7(pp84 89) and that in a responsibility-focused health care system clinicians should identify the hypotheses that underlie interventions used for prevention. We believed that the original HOAC could serve both as a template for documentation and as a conceptual model for decision making and, therefore, could link documentation and practice. This does not mean, however, that we believe either the original HOAC or the HOAC II must be implemented in the exact form we have written it, for all patients, in all settings. Rather, we contend that elements can be selected based on practicality and the expected benefit of using a system in which all elements of patient management are explicitly detailed. The HOAC II, we contend, provides a means for not only using evidence in decision making, but also for documenting the nature and extent of evidence used. Within the new version, elements related to justi-

The purpose of this article is to present HOAC II, a revised algorithm designed to meet the needs of contemporary practice. The algorithm, we believe, is compatible with the American Physical Therapy Associations (APTAs) Guide to Physical Therapist Practice,6 including the therapists need to diagnose and to offer interventions designed to prevent problems. In the context of the HOAC II, a problem is almost always a functional deficit. Although we attempted to be consistent with Guide terms, there are instances where we used alternate terms for the sake of clarity. Although the original HOAC was a first effort at bringing scientific decision making into a user-friendly practical context for clinical decision making, it has some cumbersome elements as well some logical and procedural flaws. The algorithm offered no guidance on how to determine when an intervention designed primarily for prevention was appropriate and how risk factors could be eliminated. The algorithm also did not adequately provide a means for identifying problems and

fication of interventions (eg, where evidence can be cited) should be part of any credible system of documentation. Overview of Elements in HOAC II In developing the revised algorithm, we recognized that there are usually 2 major types of patient problems: (1) those that exist when the patient is being seen and that require remediation and (2) those that may occur in the future and that require prevention. We also realized that even though clinicians do not necessarily routinely discuss these differences, clinical management of the 2 types of problems is different, and assessment of the outcomes for each must differ. While there are 2 types of problems (existing and anticipated), there are also 2 ways that problems are identified. There are patient-identified problems (PIPs) and nonpatient-identified problems (NPIPs). Patientidentified problems, which usually consist of functional limitations and disabilities, often exist when the therapist sees the patient. The patient identifies the problem. The therapist, however, needs to generate hypotheses as to the cause of problems and to establish testing criteria, which can be used to evaluate the outcomes of interventions, and the correctness of the hypothesis and patient care strategies. The patient may identify existing problems as well as express concerns relating to problems that do not yet exist and could, therefore, be the source of an anticipated problem. For example, a patient may complain of shoulder pain and express a concern about the development of limitations in movements that could be disabling. The limitations in function caused by the pain would be an existing problem (eg, an inability to cook a meal because repetitive use of the shoulder caused intolerable pain). Any loss of function that could occur if motion became even more limited would be an anticipated problem. Nonpatient-identified problems are problems that are not identified by the patient. They are problems that may occur as well as existing problems. For example, children may not be able to identify problems secondary to central nervous system deficits. A child might, for example, routinely sit in a position that compro 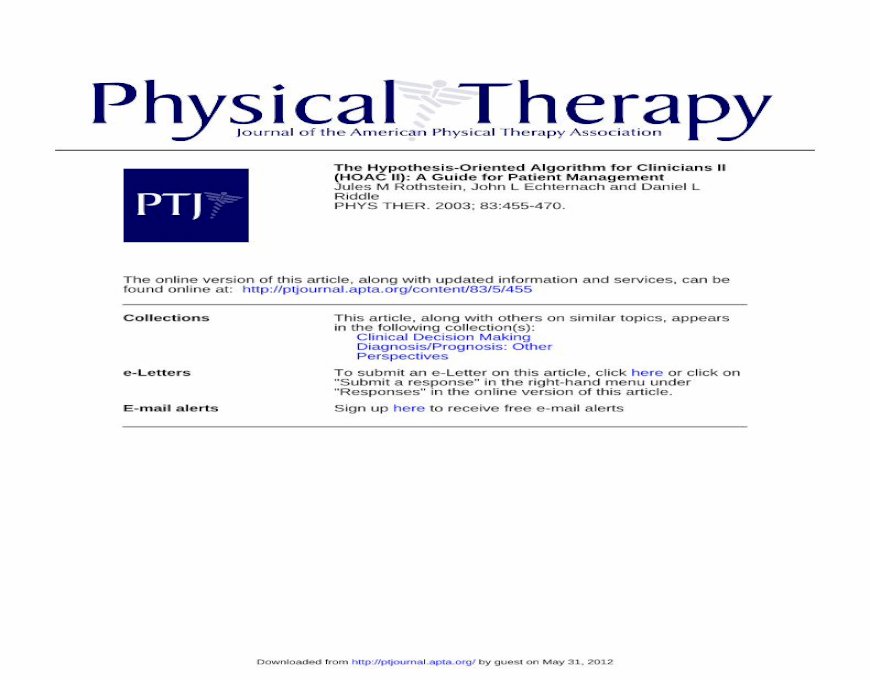 A hypothesis-based algorithm for planning and control in

The CleverMag algorithm Get the maximum from geophysical data using a user-constrained oriented interpolation algorithm. 1

Regularization Instructor : Dr. Saeed Shiry. Hypothesis Space The hypothesis space H is the space of functions allow our algorithm to provide. in the

J.E. Kennedy- Redundancy in Psi Information: Implications for the Goal-Oriented Hypothesis and for the Application of Psi

Load Balancing Algorithm Based on Aspect Oriented Approach for a