An Outline of the Larger Catecism

The Riches of His Glorious Inheritance in the SaintsWeek 9Westminster Larger Catechism Q57-89For this reason, because I have heard of your faith in the Lord Jesus and your love toward all the saints, I do not cease to give thanks for you, remembering you in my prayers, that the God of our Lord Jesus Christ, the Father of glory, may give you the Spirit of wisdom and of revelation in the knowledge of him, having the eyes of your hearts enlightened, that you may know what is the hope to which he has called you, what are the riches of his glorious inheritance in the saints, and what is the immeasurable greatness of his power toward us who believe,(Eph 1:15-19)Our theme for the next several weeks:QuestionTopicWeek57, 58 The benefits of redemption & how applied110/13/201359, 60 Who are the recipients?210/20/2013 Justification and Sanctification: Whats the difference?Dr. David Van Drunen10/27/201361-63 The visible church311/3/201364-65 The Invisible Church411/10/201366-68 Union with Christ &Effectual Call511/17/201369-71 Communion in Grace with Christ Justification611/24/201372-73 Justifying Faith712/1/201374-76Communion in Grace with Christ Adoption & Sanctification812/8/201377-78The Difference Between Justification and Sanctification912/15/201379-81Perseverance and Assurance of Believers1012/22/201382-83Communion in Glory with Christ in this life1112/29/201384-87Communion in Glory with Christ after death121/5/201488-89The Final Judgment131/12/2013Where are we going?The WLC Begins with the EndFOUNDATIONBRIDGE TO THE RESTBIBLICAL PATTERN: BELIEVE DOThe First questions answered:What is our ultimate purpose? To glorify God.How do we know how to achieve this purpose? The Word of God the Scriptures of the OT and NT.What do the Scriptures teach? Only TWO things!!What to believe concerning God [WHAT TO BELIEVE.]What duty God requires. [WHAT TO DO.]This pattern is not arbitrary why did they outline it this way? Because it has its roots in Scripture:Belief begets practice. What you believe WILL dictate how you behave.Biblical examples: Pauls letters Romans 1-11 explain the work of God then at 12:1 I beseech you therefore breteren by the mercies of God to present your bodies a living sacrificeEphesians 1- 3 Declares the work of God in salvation then at 4:1 I therefore, a prisoner for the Lord, urge you to walk in a manner worthy of the calling to which you have been called,Even in the giving of the 10 commandments we see this pattern: I am the Lord your God, who brought you out of the land of Egypt, out of the house of slavery. You shall have no other gods before me.

4567What are we to believe concerning God?What is God? A Spirit, eternally being One and Three in the Trinity, Father, Son and Holy Spirit.What did God do and what does He do?God executes His DECREES:God decreed to create all things that are including man and angels.God decrees to work in His creation in Providence:Established the angels yet some fellEstablished man in the Garden the covenant of works/creation:Allowed man to fall into sinDetermined to save His elect by the Covenant of GraceAdministered the Covenant of Grace by a MEDIATOR: Brought the Mediator into the world as the perfect God-Man - the Redeemer - fulfilling the offices of Prophet, Priest, and King in His:Perfect lifeSacrificial Death and burialTriumphant ResurrectionRemember, that is all under the heading of What to believe about God. We have not gotten to the part about what to DO yet!8What did Christ procure? How is it applied?REDEMPTION

HOLY SPIRITThe wind blows where it wishes, and you hear its sound, but you do not know where it comes from or where it goes. So it is with everyone who is born of the Spirit. (John 3:8, ESV)But when Christ appeared as a high priest of the good things that have come, then through the greater and more perfect tent (not made with hands, that is, not of this creation) he entered once for all into the holy places, not by means of the blood of goats and calves but by means of his own blood, thus securing an eternal redemption. (Hebrews 9:11-12, ESV)

Who are the recipients of these benefits?Jesus said to them, I am the bread of life; whoever comes to me shall not hunger, and whoever believes in me shall never thirst. But I said to you that you have seen me and yet do not believe. All that the Father gives me will come to me, and whoever comes to me I will never cast out. For I have come down from heaven, not to do my own will but the will of him who sent me. And this is the will of him who sent me, that I should lose nothing of all that he has given me, but raise it up on the last day. For this is the will of my Father, that everyone who looks on the Son and believes in him should have eternal life, and I will raise him up on the last day. (John 6:35-40, ESV)

Can someone receive redemption through their sincerity?This Jesus is the stone that was rejected by you, the builders, which has become the cornerstone. And there is salvation in no one else, for there is no other name under heaven given among men by which we must be saved. (Acts 4:11-12, ESV)JESUSFor the husband is the head of the wife even as Christ is the head of the church, his body, and is himself its Savior. (Ephesians 5:23, ESV)Jesus said to him, I am the way, and the truth, and the life. No one comes to the Father except through me. (John 14:6, ESV)What is the visible church? What are the benefits?A visible, organized, society assumed to exist in the NT tell it to the church. (Matthew 18:15-17, ESV)Obey your leaders and submit to them, (Hebrews 13:17, ESV) not neglecting to meet together, (Hebrews 10:23-25, ESV)This is why I left you in Crete, so that you might put what remained into order, and appoint elders in every town as I directed you (Titus 1:5, ESV)The ordained means for God to dispense His graceProclamation of His wordAdministration of the sacramentsOverseeing the membership

foreknewpredestinedcalledjustifiedglorifiedThe golden chain of redemptionAre the elect only effectually called?Vessels of honor and vessels of dishonorRomans 9I will have mercy on whom I will have mercy.

Q. 69. What is the communion in grace which the members of the invisible church have with Christ?A. The communion in grace which the members of the invisible church have with Christ, is their partaking of the virtue of his mediation, in their justification, adoption, sanctification, and whatever else, in this life, manifests their union with him.Virtue of ChristsMediationJustificationAdoptionSanctificationWhatever ElseQ. 70. What is justification?A. Justification is an act of Gods free grace unto sinners, in which he pardoneth all their sins, accepteth and accounteth their persons righteous in his sight; not for anything wrought in them, or done by them, but only for the perfect obedience and full satisfaction of Christ, by God imputed to them, and received by faith alone.For our sake he made him to be sin who knew no sin, so that in him we might become the righteousness of God. (2 Corinthians 5:21, ESV)Therefore, as one trespass led to condemnation for all men, so one act of righteousness leads to justification and life for all men. For as by the one man's disobedience the many were made sinners, so by the one man's obedience the many will be made righteous. (Romans 5:18-19, ESV)The Great ExchangeChristSinners(HisPeople)RighteousnessSin/GuiltIMPUTATIONBy FAITH ALONE(Sola Fide)Q. 72. What is justifying faith?A. Justifying faith is a saving grace, wrought in the heart of a sinner by the Spirit and Word of God, whereby he, being convinced of his sin and misery, and of the disability in himself and all other creatures to recover him out of his lost condition, not only assenteth to the truth of the promise of the gospel, but receiveth and resteth upon Christ and his righteousness, therein held forth, for pardon of sin, and for the accepting and accounting of his person righteous in the sight of God for salvation.Q. 73. How doth faith justify a sinner in the sight of God?A. Faith justifies a sinner in the sight of God, not because of those other graces which do always accompany it, or of good works that are the fruits of it, nor as if the grace of faith, or any act thereof, were imputed to him for his justification; but only as it is an instrument by which he receiveth and applieth Christ and his righteousness.What are the components of faith?EXAMPLE: Jews, Pharisees & SadduceesYou sent to John, and he has borne witness to the truth. Not that the testimony that I receive is from man, but I say these things so that you may be saved. He was a burning and shining lamp, and you were willing to rejoice for a while in his light. But the testimony that I have is greater than that of 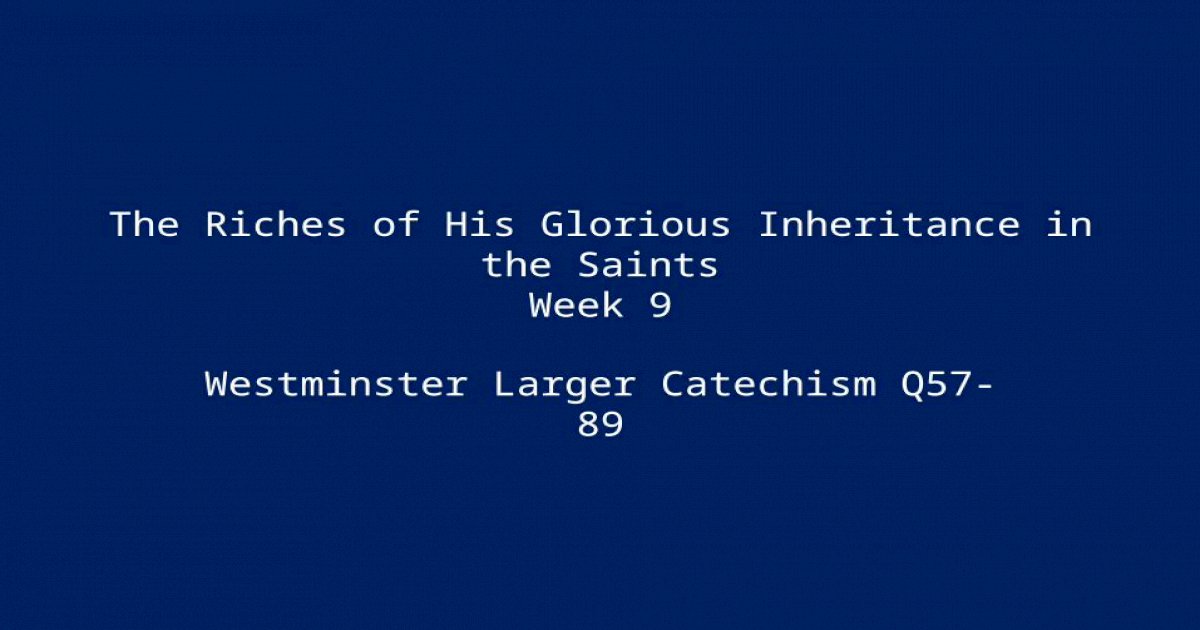