Home >Documents >The Teaching of the GKJTU - heidelberger- · PDF fileSupplement to the HEIDELBERG CATECHISM...

The Teaching of the GKJTU - heidelberger- · PDF fileSupplement to the HEIDELBERG CATECHISM...

The Teaching of the GKJTU On

Economics As Well As On Arts, Science And Technology

published by the Synod of the GKJTU

GKJTU-Supplement to the Heidelberg Catechism 2

Translators Preface Since becoming independent many churches in Asia, Africa and Latin America have formulated their own creeds, replacing the traditional creeds they inherited from European Churches. Those new creeds were intended to reformulate Christian faith facing new challenges. Just some examples from Indonesia: When the Batak Church HKBP became a member of the Lutheran World Federation they would not sign the Augsburg Confession as was customary for LWF member churches before. Instead they proposed their own creed, the Konfesi HKBP which had been endorsed by HKBP in 1951. In a similar way the reformed Javanese Christian Church (Gereja-gereja Kristen Jawa - GKJ) endorsed the Points of Teaching of the Javanese Christian Church (Pokok-pokok Ajaran GKJ) in 1996, to replace the Heidelberg Catechism which had until than been used in the GKJ. The reformed Karo-Batak-Church in North Sumatra formulated their own creed in 1979, the reformed Toraja-Church in Sulawesi endorsed theirs in 1981, the Communion of Churches in Indonesia (Persekutuan Gereja-gereja Indonesia PGI) received a common creed in 1984, although these latter three were not necessarily meant to replace the Heidelberg Catechism. (For an English translation of the three see Reformed Witness Today, ed. Lukas Vischer, Bern, 1982). The Christian Church from North Central Java (Gereja Kristen Jawa Tengah Utara GKJTU) has deliberately chosen its own special way: The GKJTU further on acknowledges the Heidelberg Catechism of 1563 as the binding summary of the Holy Scriptures and a universal creed uniting reformational churches all over the world and through the ages. Only for specific questions of its Javanese context (culture, religious pluralism) and modern challenges (politics, economics, science and technology) has the GKJTU supplemented the Heidelberg Catechism. The connection of this Supplement to the Heidelberg Catechism is visible by its outward structure: Question Answer Scripture

GKJTU-Supplement to the Heidelberg Catechism 3 citations (notwithstanding the fact that in the GKJTU Supplement the questions are often introduced by a sentence connecting it with the previous questions). But also the cross references to the Heidelberg Catechism connect the two documents, as well as the common theological structure of fall and redemption. But the decision of the GKJTU is also remarkable from a second standpoint: Actually the GKJTU originated from the work of an interdenominational faith mission, i.e. the Salatiga Mission / Neukirchener Mission. These interdenominational mission agencies had deliberately not forced any Lutheran, Reformed, Baptist or other denominational creed onto the newly founded congregations. Thus GKJTU at its 23rd Synod Assembly in 1988 was completely free to choose the Heidelberg Catechism as their creed. At its 27th Synod Assembly in 2008 the GKJTU added the supplement presented here. Thereby the GKJTU has found its identity as a Calvinist-pietistic-contextual or in simple terms: reformational church (a formula found by the 26th Synod Assembly in 2003). Most likely it was because the GKJTU had freely and deliberately chosen this Calvinist-pietistic-contextual identity (including the supplemented Heidelberg Catechism), that GKJTU has a much more positive attitude towards these traditions compared to many other Indonesian churches. In general the members of the GKJTU have a very positive attitude towards their church, which therefore is often called the beloved GKJTU. That is why the Supplement alternately and almost interchangeably talks about Christians, the GKJTU or just uses the pronoun we. Modern creeds always struggle to give answers to contemporary issues, and therefore they have to be revised from time to time. In 1996 the Batak Church HKBP thoroughly revised their above mentioned confession from 1951.The Points of Teaching of the Javanese Christian Church from 1996 have already been slightly revised in 2005. Also the common creed of the Communion of Churches in Indonesia (PGI) of 1984 has been complemented several times since then. Accordingly the GKJTU is open to revising their Supplement one day. But concerning the

GKJTU-Supplement to the Heidelberg Catechism 5 world. Secondly the Heidelberg Catechism comprises the basis of the whole of Christian doctrine, whereas the Supplement of the GKJTU is restricted to the above mentioned realms. The Heidelberg Catechism has been used by Indonesian churches mainly for catechism classes preceeding baptism and for confirmation classes, which therefore are called katekisasi in Indonesian. Whereas a regular lecture of the Catechism as part of the liturgy let alone sermons on the Catechism - as it is a rule in many reformed churches has been more or less unknown in the GKJTU. Therefore it has to be stressed in the introduction to the Supplement: These two books of doctrine of the GKJTU (The Heidelberg Catechism and its Supplement) should be used not only for catechism classes and confirmation classes, but also on other occasions, e.g. being cited in sermons, read as a part of the liturgy, (Compare below, Introduction by GKJTU, p. 9) The (partly necessarily quite dynamic) translation presented here is an attempt do make this GKJTU-Supplement to the Heidelberg Catechism accessible for interested readers without demanding special knowledge in theology, Indonesian language or Javanese culture. It is also intended for readers who speak English not as their mother tongue, but only as a second (or may be even as a third or fourth) language. Therefore an over-exact expert terminology was avoided. Notes were added which provide background information for readers not acquainted with Javanese culture. In this translation the English scripture citations are taken from the New Revised Standard Version (1989) if not otherwise stated. Other translations are cited if their wording is closer to the wording of the official Indonesian Bible Society Translation (Terjemahan Baru) cited in the original GKJTU Supplement to Heidelberg Catechism and thus make its understanding easier. In three cases (Matth. 19:6, question no. 9; 1Cor. 5:12-13, question no. 22; Job 37:23, question 65) the translators even had to provide an own translation of the verse, because no English translation could be found which really reflected the

GKJTU-Supplement to the Heidelberg Catechism 6 understanding of the Bible text as in the official Indonesian translation of those verses. In many instances the answers of the GKJTU-Supplement might seem strangely ambiguous to the European reader (and may be even more strange for the American reader, who might prefer more practical answers). This ambiguity is caused firstly by the deliberate shortness of the supplement, which makes it impossible to give a more detailed answer. Secondly the GKJTU stresses the reformational freedom, which cannot accept casuistic and legalistic answers. Thirdly in many particular questions the congregations of the GKJTU have not yet found a common attitude, just this Supplement shall cautiously help the congregations to get to such a common stance. Fourthly the Javanese find is much easier to apply these general types of advice to their day to day life; only the reader who is not so well-acquainted with Javanese culture might wonder what the proposed action might look like. Finally it is a feature of Javanese cultur 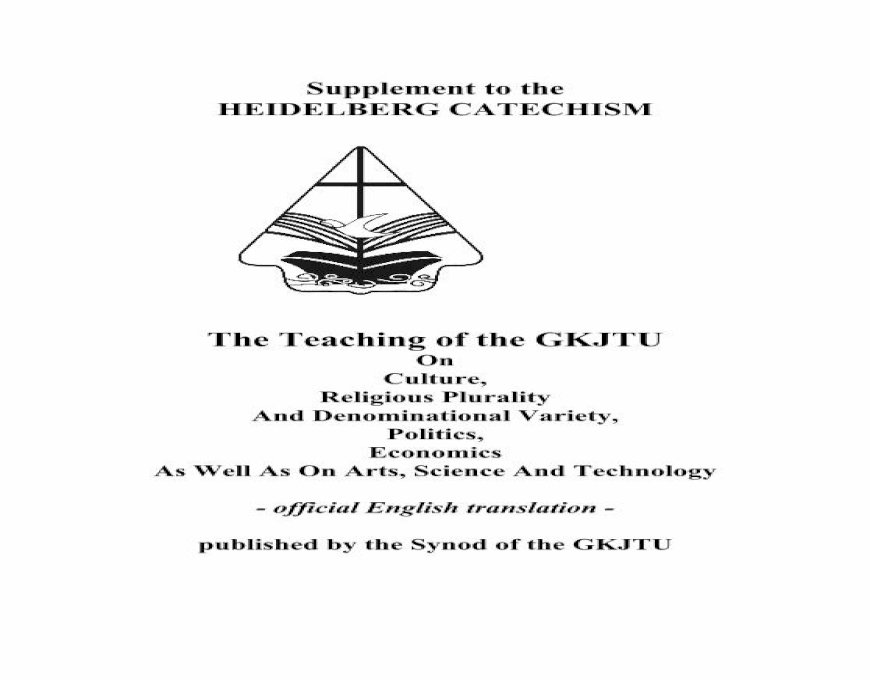 Introduction to the Catechism Catechism Questions 001-033