Home >Documents >The Weakening of Feudalism

The Weakening of Feudalism

DownloadReport this document
Share this document with a friend
Description:
The Weakening of Feudalism. England. King Henry II. Ruled from 1154 to 1189 Made legal reform a central concern of his reign Ruled that juries must formally accuse a person of a serious crime Strengthened royal authority. Constitutions of Clarendon. - PowerPoint PPT Presentation
Transcript:

3Constitutions of ClarendonThe document spelled out the kings traditional rights. The king had the right to try clergy accused of serious crimes in royal courts.Upset the Archbishop of Canterbury, Thomas Becket, the kings friend.

4The Magna CartaIn June 1215 King John met with barons and put a seal on the Great Charter.John agreed to observe common law and the traditional rights of barons and the church.

6Model ParliamentEstablished by King Edward IIncluded commoners and lower ranking clergy as well as church officialsThese were steps to include more people in English government.

The Game Changer/ The Watershed Moment: The Bubonic Plague8A Plague!!!Struck Europe from 1347 to 1351Began in central Asia and spread along the Silk RoadOver a third of the population of Europe died25 million peopleSome say 40-50%Carried by fleas on the backs of rats

9The Black DeathVictims showed black and blue blotches on their skin after being infected. Living conditions contributed to the spread of the plague.

122) What did the Magna Carta protect?

133) List two reasons for the English victory at the Battle of Crecy.

144) What trading route did the bubonic plague spread through?

155) What are two reasons for the shift of power away from feudal lords after The Hundred Years War?

7) Why was the bubonic plague known as the Black Death? 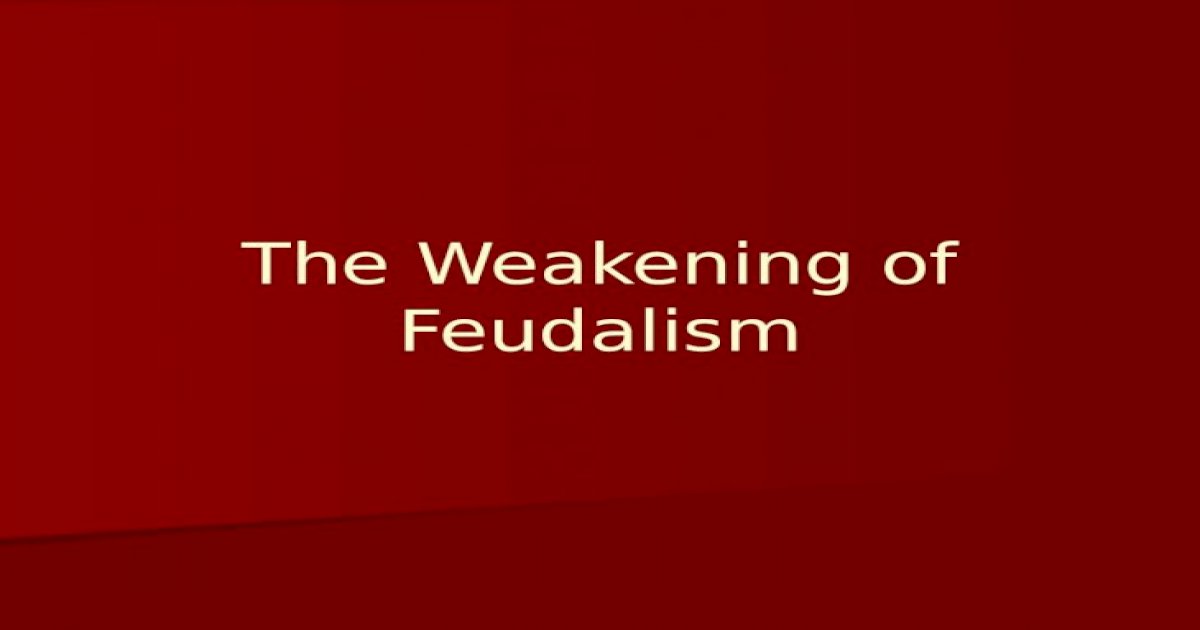 Aim: Was Feudalism in Japan similar to European Feudalism?

UNIVERSITY OF for BA Political... · PDF fileSchool of Distance Education Modern World History Page 2 UNIVERSITY OF CALICUT ... The Crusades also contributed to the weakening of Feudalism

The Decline of Feudalism

The Decline of Feudalism · PDF file 2020. 11. 2. · feudal manors and moved to towns and cities, seeking better opportunities. This led to a weakening of the manor system and a loss