The Hebrew University of Jerusalem

Talk is cheap, or so we are taught in our introductory IR courses. But we are taught so in words, in speech acts that westudents and lecturers aliketake quite seriously. I would not question the common practices in international politics. I would, though, take seriously the above-mentioned seriousness, treating it as a datum and opportunity to the discussion offered here, which following Martin Buber's dialogical philosophy, will establish three dialogic imperatives scholars of IR are burdened with. The first imperative is internal to the scholar. It is the intrapersonal imperative to conduct a dialogue with and in herself/himself. The second dialogic imperative is the interpersonal one, and it functions as to establish a community of scholars. The third dialogic imperative is external to the community of scholars. It is the obligation to be engaged dialogically with the public the scholars are part of.

Martin Bubers philosophy is immensely rich, multilayered, and wide-scoped. He was one of those Renaissance man whose writings expand on such diverse topics as theology, biblical studies, political and social philosophy, epistemology, sociology, education, and Zionism. Any attempt by me to engage his thought, especially in an article format, is doomed to be superficial and do harm to Bubers intricateness. To avoid inflicting this intellectual harm, I will not attempt to analyze his philosophy, but rather will take Bubers advice and try to follow the way he is pointing at. Specifically, I will engage his philosophy as a pointer to how we ought conduct social research. Entering into dialogue with Bubers philosophy I will engage some of his principle themes, and offer the above-mentioned three dialogic imperatives. Buber (1878-1965) was born in Vienna and his academic and intellectual career drove him to Germany. The rise of the Nazis and their persecutions of Jews drove him in 1938 to Palestine where he was appointed the first chair of the sociology department in the newly established Hebrew University of Jerusalem. Though interested in sociology from early on, studying under Wilhem Dilthey and Georg Simmel, the horrors of First World war and later those of the Holocaust intensified his interest in the human studies and in social and political philosophy. The maladies of modern society set off his interest in the possibilities of genuine human relation as the cure of the alienated modern society.

The core theme of Bubers philosophy is dialogue as that authentic human phenomenon that is a meeting between persons, fostered by mutually and intentionally opening of hearts. It is dialogue that acts as the thread that gives unity to Bubers mature philosophy, and is fleshed out in his anthropological philosophy, in his social and political philosophy, and in his understandings of epistemology and ethics. Following his interest in epistemology and ethics I will provide both ethical justifications and epistemological reasoning to each of the three dialogic imperatives. I will also relate Buber to contemporary perspectives such as feminism, constructivism, and deliberative democracy, and bring themso to speakinto dialogue that will enable me to translate his abstract ideas into guidelines for the organization of scholars as a community of dialogue.

Each of Bubers main themes and principles will be developed in due course. However, a preliminary exposition will help the readers to navigate their way through the paper. Buber maintained that although living in social alienation man can heal society by entering into interpersonal dialogue that is conditioned on presence, true intention, and mutual opening of hearts. Those three traits can lead to the genuine dialogue that constitutes relation of I-Thou as that relation of unmediated listening and unity of existence. Constituting I-Thou relation establishes the interpersonal sphere that Buber called the Between and it enables constructing a community as We. Community is characterized by the quality of the I-Thou relation, and is gravitated by a common Center that functions as that which bind the several Is into We, envisioned by Buber as the ethical human and social existence. The Center is the shared facet of human society that its existence enables overcoming alienation and entering into dialogue. The obverse kind of relation is the I-It which is based on instrumentalization of the members of society and on distancing each other. I-It maintains the alienated conditions of human society, preventing the constitution of the dialogical community as We.

The quality of the I-Thou and I-It relations exists, according to Buber, not only between persons, but also between persons and nature, as well as with intellectual essences such as theory. As I will argue later, it is here, in the relation between persons and nature, as well as with theory, that Bubers phenomenology is most pronounced, and where his philosophy is best suitable to the understanding of the qualities and functioning of science and theory. Buber understands science and theory as relating to nature in the I-It mode, characterized by distance and instrumentalization. Admittingly this way of doing science and social science contributes to material progress. Buber emphasizes, however, that relating thus to nature may hinder fuller human progress. Accordingly, we should strive to a more balanced and humanized science that relates with nature and social reality also in an I-Thou mode. The remaining of the paper will dialogically engage with those Buberian themes and offer three dialogic imperatives that will help humanize the scholarly study of IR: the intrapersonal, the interpersonal, and dialogue with the public. The third dialogic imperative, that with the public will turn out to be also a dialogic imperative with truth about the public, that is with social reality. Additionally, I will propose several derivative measures to help concretizing these dialogic imperatives, such as, pluralism, investing our efforts and resources in workshops, and adopting irony in our relation with theory.

Discharging the dialogic imperatives and implementing the derivative measures will help to counteract the tendency of IR to fall prey to inter-paradigmatic wars. In those not too infrequent wars theorists turn ideologues and shut themselves of hearing and learning from other theoretical frameworks. This paper is a Buberian invitation to substitute ideological interaction with a dialogical one, ensuring genuine and truthful deliberations that can benefit both scholarly and public life.

The first dialogic imperative: the intrapersonal

For Buber Self-dialogue is necessitated by two sources, the first epistemological and the second ethical. On epistemological grounds, Buber argued that there can be no true knowledge of the world and of human society and community, without self-knowledge, philosophical knowledge of man is essentially mans self-reflection, and man can reflect about himself only when the cognizing person, that is, the philosopher pursuing anthropology, first of all reflects about himself as a person. To know reality one has to know ones own assumptions that act as filters which distort a true encounter with reality. Buber conceived theoretical knowledge in a very similar way to feminist standpoint epistemology, the claim that all knowledgetheoretical knowledge includedis situated both socially and politically; all knowledge, that is, is determined by the position of the knower in the social hierarchy and his ensuing social and political commitments. As Lawrence Silberstein made clear, for Buber, the sociologist lacks an O 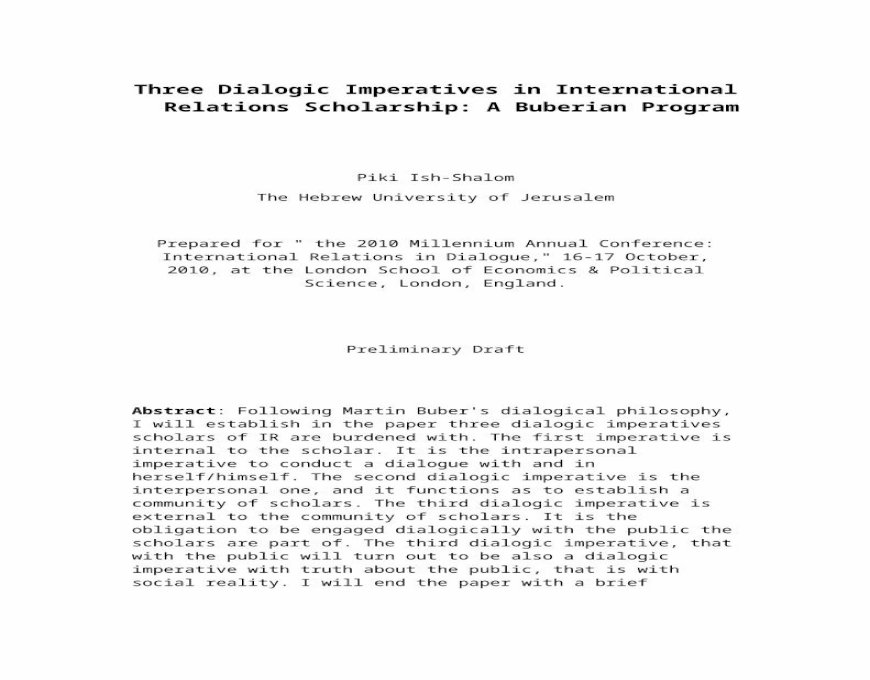 Imperatives with the calling contour cleoc/bls-imperatives-calling-contour.pdfآ  imperatives and DLT,