2. So this is the house I built for Monica and the kids spending what they started with plus 6000 which left over 1000 tospare. I did end up having to sell a toilet though because we couldnt pay the maid!
3. And this is the inside. Monicas bedroom was locked so no kids could get in her toilet and theres a separate bath and a toilet by the pottys which were separated with room divider things. It all worked quite well. And here are the kiddies
4. Nate
Cecilia
Judith
5. Zachary
Romeo
Petra
They are all Monicas children and all have different fathers (just randomers, no simselves here!,)except for Petra. Shes the last one made so didnt get to have a dad.
William
6. On the first day the kids were moved into the houses using move_objects, all sat on the potty and then fed. Poor William was the first one who needed to be changed, and he, Nate and Cecilia were the first to pass out. An old man was invited in off the street and took care of Romeo, they were friends by the end of the day!
7. By the time Monica had got them all to bed, they started to wake up again so she called a nanny. Her name is Camryn Tan and shes useless! Curtis on the other hand was quite helpful. After that I just lost track of everything
8. The maid came on Tuesday because the place was a tip, and the nanny was called back almost as soon as she left. She left kiddies asleep on the floor!
9. This was the general look the house, a total nightmare!
10. Although it soon became worse. One nanny pee puddle from day 2 never got cleaned up and just spread everywhere.
11. There was passing out from both mother and all of the children at some point, and few stinky bottles were drunk. Monica was not a happy bunny.
12. I totally lost track of all the toddler pass outs.
13. And the potty training really didnt go too well. In the end only Petra got potty trained. *sob*
14. The pottys rarely got emptied, there were rotten bottles everywhere and poor Monica lived off gelatine.
15. There were some good times in the house though, Petra even got a bath which filled here hygiene bar right up to the top!
16. The nanny wet herself 3 times, but it was the first puddle which cause the mess. Zachary definitely started it.
17. On day 4 the gypsy dropped off a genie lamp! I have no idea why, but it was certainly welcome. Monica wished for money so she could pay the maid and the nanny and also wished for peace of mind, but it didnt do anything.
18. Then the weirdest thing happened Zachary grew up at precisely 11:17am. I swear I didnt click on him, I was busy with Monica an the genie at the time. Perhaps he just got bored of being ignored. Anyway, he grew up badly as you can see with 2 creativity points, 1 logic point, was not best friends with Monica and had 0 aspiration points. =(
19. Also, the trash can got knocked over at some point (I dont know when, like I had time to pay attention to that!) and we got cockroaches. Nice!
20. So 6 oclock roles round and all the kiddies are in their cribs, so Monica takes them out one by one, cleans them up and tries one last attempt to potty train them. It didnt go too well though, Monica was starving and exhausted herself.
21. Cecilia grew up first. She grew up well with 2000 aspiration points, 1 mechanical, 1 creativity and 2 charisma points, no toddler skills and was best friends with her mum and brother Nate.
22. Judith was next up. She grew up well too, with 2750 aspiration points, no toddler skills, 1 logic, 2 charisma and 2 creativity point and was best friends with Monica too.
23. Petra grew up well too with 3750 aspiration points, 1 charisma and 3 logic points and was potty trained! Honest she was, I was just so excited I didnt take a picture apparently. But in my notes it says it was on Thursday morning, before the genie lamp arrived and Zachary grew up.
24. Romeo here obviously grew up badly. Why? He was not friends with mum, not potty trained, had only 1 logic point and NO aspiration points! Im so sorry Romeo, Ill make it up to you.
25. And finally William and Nate grew up. Will grew up well, had 1500 aspiration points, was best friends with Monica and had 1 mechanical, 1 creativity and 2 logic points. Nate grew up well too, had 1 mechanical and 2 creativity points, 1000 aspiration points and was best friends with Cecilia.
All done, score on the next page
26. +3 points per toddler skill3 x 1+3 points per toddler that grows up well3 x 5+1 point per skill point1 x 24+1 point each time a nanny pees herself1 x 3+1 point per child the parent is Best Friends with1 x 3+1 point each time a toddler gets a bottle from a visitor1 x 1-1 point for each toddler that passes out on the floor-1 x 20-1 point for each nappy(diaper) changed-1 x 13-1 point for each social worker warning message-1 x 1-1 point each time a toddler drinks spoilt milk-1 x 2-2 points each time you hire a babysitter-2 x 5-2 points each time the maid comes-2 x 3-5 points each time your parent passes out from exhaustion-5 x 4
-23
-23
-23
-23
-23
-23
-23
This means I am a terrible, terrible person, and should not be left in charge of large groups of toddlers! I am ashamed of myself and my simming skills and envious of people who scored positive points in this challenge, which is absolutely everyone, so well done you! I will continue to play this house in my BACC hood so hopefully Ill make it up to all of them. =) 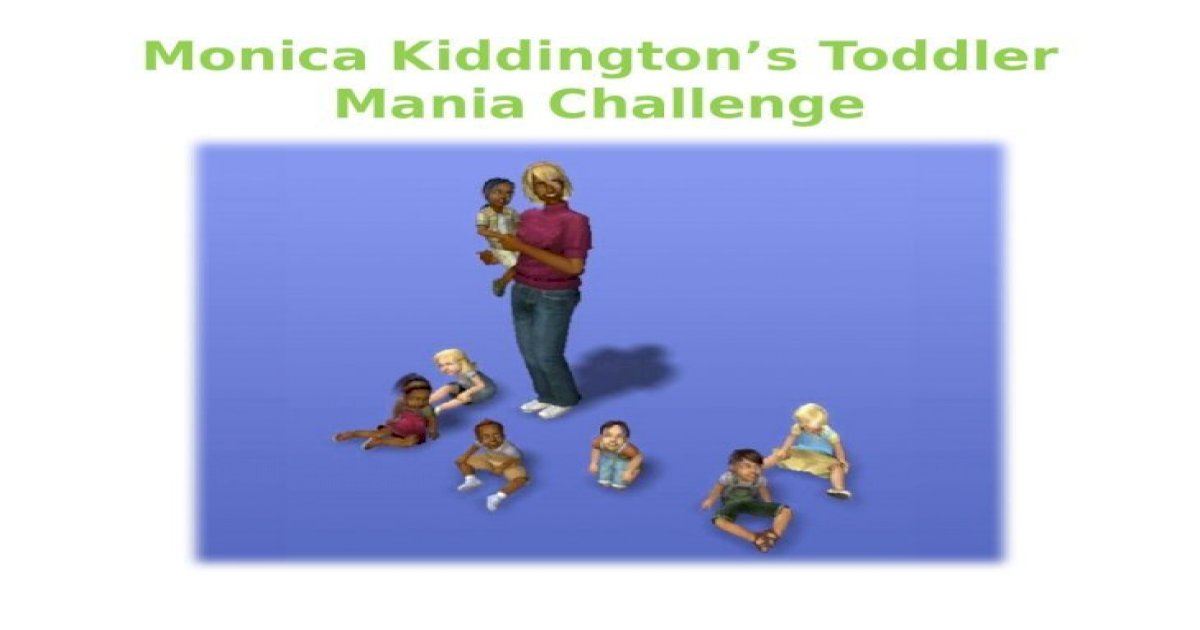