Abstract Underbalanced drilling is used with increasing frequency on a worldwide basis to reduce invasive formation damage effects and drilling problems associated with many horizontal wells in challenging reservoir exploitation situations. When the primary objective of the underbalanced drilling operation is to reduce or eliminate formation damage effects, the importance of maintaining a continuous underbalanced pressure condition during the complete operation is essential in obtaining the maximum benefit with respect to formation damage reduction. The importance of this has been emphasized in previous work, but this paper details some of the specific reservoir design and operational parameters which must be considered to ensure that the underbalanced pressure condition is maintained on a continuous basis. This includes such issues as pipe connection effects, various wellbore geometries, frictional flow and back pressure effects, localized depletion effects, gravity invasion and drainage effects, countercurrent imbibition effects, hole cleaning, bit jetting, and a number of other issues which can affect the ability to maintain a continuously underbalanced condition in a given reservoir

situation. Examples of these situations will be presented, along with suggestions in certain operational circumstances which can be utilized to reduce the effect of these problems. What is Underbalanced Drilling? Underbalanced drilling, in its simplest definition, refers to a condition where the net pressure exerted by the circulating drilling fluid in the annular space between the drill string and the formation is less than the effective pore pressure in the formation adjacent to the wellbore. This results in a pressure imbalance situation where the flow of oil, water, or gas (which may be contained within the pore space) is induced into the wellbore and returns to the surface along with the circulating drilling fluid. Ideally, this condition is generated in every portion of the exposed viable reservoir pay during the complete drilling operation, but in some situations, due to circumstances which will be discussed in detail later in this paper, this may not be the case.

What are the Benefits of Underbalanced Drilling? Operators who are implementing underbalanced drilling technology in both horizontal and vertical wells commonly give a number of motivations. The most common motivations for the implementation of an underbalanced drilling operation include: 1. A reduction in invasive formation damage and near wellbore skin effects to obtain higher production rates from a given wellbore and reduce or eliminate the necessity for costly and unnecessary completion and stimulation operations. 2. Significantly increased rates of penetration resulting in a reduction in drilling time and costs in some applications. 3. A reduction in drilling problems such has lost circulation, high torque and drag, differential sticking, etc. 4. Instantaneous indication while drilling of the presence of productive intervals and the ability to flow test well drilling. 5. Flush production of reservoir fluids during the drilling operation. The specific motivation for an underbalanced drilling operation highly influences the importance of maintaining the underbalanced pressure condition on a continuous basis. In most situations, to justify the added expense of using underbalanced drilling technology, the primary motivation is to reduce formation damage to obtain improved production rates of oil or gas from a particular formation. As will be illustrated in greater detail later in the paper, it is in this particular situation in which the continuous maintenance of the underbalanced pressure condition becomes the most essential parameter to be considered. The benefits and disadvantages of underbalanced drilling have been discussed by a number of different authors(1-10). Types of Underbalanced Drilling Operations As defined previously, an underbalanced condition is generated at any point in the wellbore where the pressure of the circulating drilling fluid is less than the existing pore pressure in the adjacent formation. This condition can be generated in a number of fashions depending on the specific

reservoir geometry and, more importantly, on the naturally occurring reservoir pressure which is present. In normally pressured formations or overpressured formations, the underbalanced pressure condition may be generated by using either conventionally weighted water-based fluids or low density oil-based drilling fluids. A condition in which the underbalanced condition can be naturally generated, without the need to artificially reduce the density of the circulating drilling fluid beyond its natural single phase condition, is referred to as flow drilling and has been commonly used for many years in areas such as the Austin Chalk in Texas. In situations where subnormally pressured formations are under consideration, or if a mature reservoir development application is occurring and the reservoir pressure in the target zone has been substantially depleted from its original value, it becomes impossible to obtain an underbalanced condition using normally weighted water-based or hydrocarbon based single phase drilling fluids, due to the weight of the hydrostatic column of fluid above the formation. In such situations, the density of the circulating drilling fluid is further reduced by the inclusion of a noncondensable gas phase, such as nitrogen or natural gas, to reduce the overall circulating fluid density to the point where the hydrostatic head is low enough that an underbalanced pressure condition can be effectively generated in the bottomhole annular space. This type of underbalanced drilling is sometimes referred to as induced or artificial underbalanced drilling, and represents the major topic of discussion of this paper as it represents one of the more challenging applications of this particular technology type. A simplified schematic illustration of a typical induced closed loop underbalanced drilling operation is illustrated as Figure 1. Common Formation Damage Mechanisms Conventional Overbalanced Drilling Operations in

Formation damage refers to any reduction in the natural inherent permeability of an oil or gas bearing formation due to the invasion or other interaction of produced or injected foreign fluids and solids(13-15). Certain types of formation damage may also be inherent in associated changes in the temperature; pressure or composition of fluids contained insitu in the reservoir during production and/or injection operations. The most common types of formation damage occurring during normal overbalanced drilling operations, which an operator would want to avoid through the use of

underbalanced drilling technology, include the following: 1. The motion of in-situ fines and particulates within the pore system caused by high spurt losses of overbalanced water-based or oil-based drilling fluids into the formation(12). 2. The invasion and permanent entrainment of various types of suspended particulate matter which are commonly contained in overbalanced drilling fluids, including various types of weighting agents, fluid loss agents, bridging agents, as well as naturally occurring drill solids generated by the milling action of the drill bit on the formation. 3. Drill string and drill bit induced near wellbore damage effects such as glazing and mashing. 4. Adverse relative permeability effects such as water blocking and hydrocarbon trapping associated with the invasion and permanent or transient increase in fluid saturations in the near wellbore region(24,25). 5. Adverse rock-fluid interactions such as swelling clays or deflocculation and dispersion of in-situ clays caused by incompatibilities between invading water-based filtrates. 6. Adverse fluid-fluid interactions which may occur between invading the fluid filtrates and in-situ formation fluids. These would include such phenomena as the formation of various types of scales, precipitates, sludges and emulsions. The precipitation of asphaltenes, hydrates, and paraffins would also fall under this category. 7. Near wellbore wettability alterations which may cause an alteration in the water-oil or gas-oil relative permeability character of the near wellbore region. 8. The invasion of viable bacteria which may cause a subsequent polymer secretion and blocking, corrosion problems, or the generation of toxic hydrogen sulfide gases by sulfate reduction. In general, underbalanced drilling is considered a technique to avoid the introduction of external fluids and solids into the formation. With the exception, of glazing and mashing, it can be seen that all of the previously discussed formation damage mechanisms are associated with the invasion and entrainment of an extraneous fluid and/or solid into the near wellbore region which causes a resulting

distance into the productive formation. If this filter cake is properly designed and formed, it can be readily removed by simple mechanical back flow of the formation, or by a very localized chemical or mechanical stimulation and completion treatments (Figure 3). Low fluid loss bridging systems can be designed for overbalanced operations for many different types of reservoir systems; however, obtaining low fluid loss and invasion becomes more challenging in an overbalanced situation in very heterogeneous reservoirs which may contain wide pore throat size distributions, fractures, vuggy porosity, extremely high permeability, or in more homogeneous formations under conditions of very high overbalance pressure. These may all represent situations in which underbalanced drilling may be an attractive option to the operator for the purposes of formation damage reduction. It can be seen that the well-designed and implemented underbalanced drilling operation (Figure 4) eliminates the majority of the concerns associated with fluid and solids invasion. Since the net imposed differential pressure gradient is from the formation into the wellbore, this obviates the majority of the propensity for the potential invasion of the damaging fluid filtrates and solids into the formation (with the exception of certain countercurrent imbibition effects which will be discussed later in the paper). Unfortunately, it can also be seen (Figure 5) that if the underbalanced pressure condition is compromised during the drilling operations, because no stable sealing filter cake has been established on the face of a formation, that rapid invasion of the circulating drilling fluid into the matrix or macro porosity features in the pore system adjacent to the wellbore can occur, even during a relatively brief period of applied overbalance pressure. This phenomena, in general, is further aggravated by the fact that the majority of base fluids used in underbalanced drilling operations have a very low viscosity and generally consist of clear brines or low viscosity oils. These low viscosity fluids are utilized so that turbulent flow can be maintained in the annular space for hole cleaning purposes and to allow for easier disengagement of the multiphase flow and, gas, liquid mixture at the surface in the separator facilities for solids control and liquid recycling purposes. This means that base drilling fluid, if the underbalanced pressure condition is compromised, has little or no apparent rheology and low viscosity in comparison to a conventional drilling mud which is specifically designed with viscosity and fluid loss characteristics in mind. This, therefore, compounds the degree and speed of invasion which may be expected to occur during an overbalanced incident when a typical

of lower cost and availability of conventional drilling technology, and the generally superior steering and outreach capability of jointed pipe for extended horizontal well applications in comparison to coiled tubing. A variety of measurement while drilling technologies are utilized with the most common methodology currently being electromagnetic tools (where depth and reservoir conditions permit). Common Causes of a Loss in the Continuous Underbalanced Pressure Condition It can be seen in an artificially induced underbalanced drilling situation that the maintenance of the underbalanced pressure condition is much more complex than in a conventional flow drilling situation where, even if circulation ceases and a full hydrostatic column of the drilling fluid is applied to the formation, the underbalanced pressure condition is still maintained. A number of common sources of oscillation in the bottomhole pressure are observed during artificially induced underbalanced drilling operations, these include: Increases in Mud Weight During normal drilling operations, mud weight often increases due to the milling action of the drill bit on the formation and the inability of the surface solids control equipment to adequately remove these solids (particularly drill solids 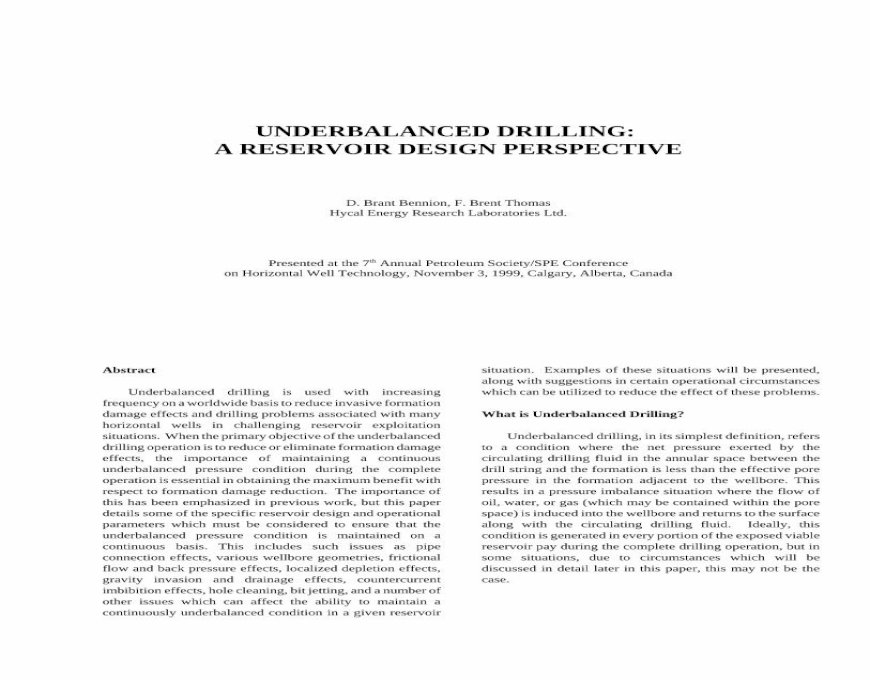 Understanding by Design - ThomasRye - Home · PDF file UbD is way of thinking, not a recipe for unit design. UbD is an effective and efficient tool for planning aligned, standards-based

Understanding by Design, UbD - based on work by McTighe and Wiggins