UNESCO-EOLSS - · Web view The Dhofar Mountains and surrounding areas in southern Oman are...

1.2 Overview of the Middle East climate

2.2 Climate of the Arabian Peninsula an overview

2.2.1 Climate of Kingdom of Saudi Arabia

2.2.3 Climate of the United Arab Emirates

2.6 Climate of Israel and Palestine

3. Dust storms over the Middle East

3.2 Synoptic analysis of dust storm in the Middle East

6. Circulation systems affect the climate of the Middle East

6.1 Impact of the North Atlantic (NAO) on the Middle East climate

6.4 The role of Jets streams on Middle East climate

The Middle East is a region that spans southwestern Asia, western Asia, and northeastern Africa. Although much of the Middle East region has a Mediterranean climate type, i.e. Csa in the widely used Koeppen classification with wet winters and dry summers. Middle Eastern climatic conditions vary greatly, depending on the season and the geography. Although the hot arid, or desert, climate predominates in the region, the well-watered highlands of Turkey and the mountains of Iran and Ethiopia are important as sources of the region's major rivers.

The Middle East is as one of the regions most affected by dust, in the world, next to Africa. Dust or sand storms are caused by the outflow from low-pressure cells passing through a desert area from west to east. Sand storms can occur throughout the year in the Middle East, but the prime months are May-September.

The results of many researchers showed a linear warming across the Middle East. The maximum warming is occurring in the spring, and the minimum warming is occurring in the winter. Local and regional warming signal may be associated with human-induced desertification and overgrazing. The results of model in the 21st century show widespread warming, with a maximum in interior Iran during summer. It also found some cooling in the southeast Black Sea region during spring and summer that is related to increases in snowfall in the region. The results also show widespread decreases in precipitation over the eastern Mediterranean and Turkey, and increases were found over the southeast Black Sea, southwest Caspian Sea, and Zagros mountain regions during all seasons except summer. While the Saudi desert region receives increases during summer and autumn.

The variability of atmospheric circulation is the most important factor determining changes in spatial distribution of temperature, cloudiness, precipitation and other climatic elements. The North Atlantic Oscillation (NAO) atmospheric circulation pattern appears to exhibit a clear influence on the climate of the region on inter-annual and decadal timescales. Drier-than-average conditions prevail over parts of the Middle East during high NAO index winters. There is recent evidence that the El Niño/Southern Oscillation (ENSO) has influence on the climate of the Middle East in recent decades. El Niño conditions weaken the Indian monsoon and warm the Arabian Sea thus weakening the pressure gradient and reducing the wind speed. La Niña conditions make the pressure gradient stronger thus bringing more rainfall in the region. Anomalous temperature variations over the Middle East (cooling) associated with the stronger clockwise flow around the subtropical Atlantic high-pressure center. The oscillation and strength of Asiatic monsoon low pressure and subtropical high pressure play an important role in rainfall over the River Nile. The annual migration of the ITCZ and seasonal development of the monsoon winds are key-components of the climatology in the Indian Ocean and the surrounding areas.

Tropical Easterly jet stream was weakened in El Nino year and enhanced in La Nina year accompanying with the dry and wet condition respectively. Subtropical jet stream has affect on temperature and rainfall over Arabian Peninsula, where the core of the subtropical jet is stronger during the winter than the other seasons and located near 27.5oN, while it’s weaker during the summer and shifted north ward to appear at 43oN.The interaction between the polar front jet stream (PFJ) and subtropical jet stream (SJS) and its role in the surface cyclogenesis has been affected not only over the North African region but also over other subtropical regions.

The Middle East borders are not well established. The boundaries of this region change with changing topics. A different approach in defining the area is used in politics, geography, history, environment, economics, and so on. The term "Middle East" was popularized around 1900 in the United Kingdom (http://en.wikipedia.org/wiki/Middle_East#cite_note-1). The Middle East (or, formerly more common, the Near East (http://en.wikipedia.org/wiki/Middle_East#cite_note-0) is a region that spans southwestern Asia, western Asia, and northeastern Africa. The term refers collectively to the Asian countries of Bahrain, Cyprus, Iran, Iraq, Palestine, Israel, Lebanon, Oman, Qatar, Saudi Arabia, Syria, Turkey, the United Arab Emirates, and Yemen, and the African country of Egypt. Much of the Middle East is arid, and the region's topography features extensive desert areas, rugged mountains, and dry plateaus.  Water is in short supply, and agriculture often depends on expensive irrigation systems.  The Middle East map (Figure 1) identifies the primary countries of the Middle East and shows their national boundaries.

1.2 Overview of the Middle East climate

In the Middle East, investigations of long-term variations and trends in temperature data are not suffer serious environmental, agricultural and water resources problems, receiving enough attention even though, these countries. The Middle East is interesting for several reasons. The landscape has been massively altered by developing human activity over the last 8000 years, including forest removal, rangeland degradation by grazing and trampling, and watercourse damming and diversion. Due to rapid population growth, political conflict and water scarcity are common throughout the area, rendering it sensitive to changes in climate. A significant impact on the history of the region may be due to climate change. Although much of the Middle East region has a Mediterranean climate type, i.e. Csa in the widely used Koeppen classification (Oliver and Hidore, 1984) with wet winters and dry summers, the spatial gradients in climate are far sharper than in the broad prototype Csa region to the west. For example, along the 40°N meridian, the northward transition from desert (BWh) through steppe (BSh) to cool highland climate (H) occurs within 400 km. Elsewhere in the region, numerous coastlines and mountain ranges modify the local climates (Oliver and Hidore, 1984).

Middle Eastern climatic conditions vary greatly, depending on the season and the geography. The basic climate of the Middle East can be characterized in two words: hot and dry, although winters are mild with some rain. The exception is the mountains, where desert turns to steppe in northern Iraq, northern Iran and eastern Turkey. Winters here can be severe. The Arabian Peninsula has among the hottest and driest conditions found anywhere in the world. The hot desert conditions induce a strong seasonal wind pattern in the region, known as the monsoon. Although we often associate "monsoon" with flooding rains, it comes from an Arabic word meaning "season". During the summer, winds blow unabated toward the hot interior of the Arabian Peninsula, whereas in winter, the winds are in the south and blow off the land. In northern regions, continental winds usher in cold Siberian air which wrings some rain and snow out of the sky along the coasts. Across the Middle East, summer temperatures are usually around 29°C (84.2°F), but often soar above 38°C (100.4°F). In Baghdad, the record high is 49°C (120.2°F); in Basra, 51°C (123.8°F), the highest temperatures recorded in any major Middle Eastern city. In the Saudi desert, however, temperatures over 49°C (120.2°F) are common. Most storms crossing the Middle East become dust- or sandstorms when strong winds whip the dry desert surface; as many as 38 occur annually.

Precipitation on the semiarid margins of Middle Eastern deserts ranges from 14 inches (350 mm) to 30 inches (750 mm) annually. Rainfall variability within the area of desert climate exceeds 40 percent, reducing to 20 percent on the moist margins of the semiarid zone, which forms a transition between the true desert to the 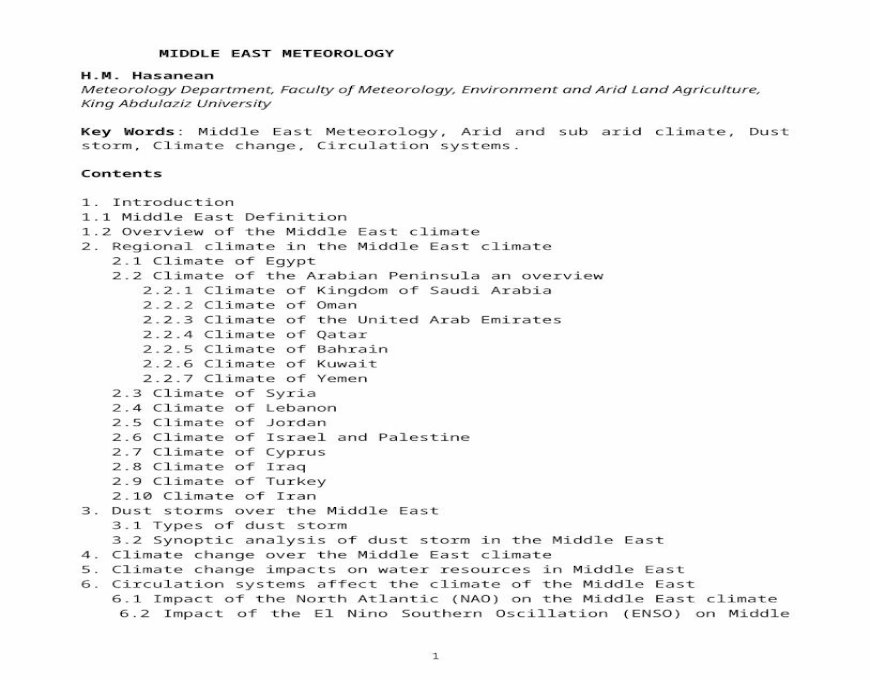 BANK DHOFAR SAOG Report and financial statements for the year