Upward BasketballCoach Training MeetingThe Upward Basketball CoachPrepare for practices by having a plan in place for skill developmentTeach the fundamentals of the game through drills to enhance basic basketball skillsTeach the rules of the game of basketballShare a five to eight minute devotion with your team during each mid-practice huddle timeDistribute practice stars at the end of each practice and practice cards at the end of specific practices during the seasonResponsibilities at Practices:Participate in player introductions and pre-game prayer led by the refereesSupport the referee with positive comments throughout each gameKnow and follow the substitution system each gameAt the end of each game, conduct a game day star presentation with all players and parentsThe Upward Basketball CoachResponsibilities at Games:Practice Breakdown2. Warm-up activity (3-5 minutes) Have players participate in an activity to warm up their muscles.1. Pre-Practice Huddle (3-5 minutes) Teach and review rules of the sport throughout the season. Teach and review the proper techniques for each skill involved in basketball. Introduce no more that two skills per practice.3. Practice Skills and Drills (20 minutes) Take the skills that were taught at the pre-practice huddle and implement drills to reinforce learning. Each skill should be followed up with two to three drills.Practice Breakdown5. Scrimmage (20 minutes) Game simulations are a great way for players to practice skills they have been taught. This also gives you time to coach technique and strategy.6. Post-practice Huddle (5 minutes) Distribute green practice stars and practice cards. Remind players about the TeamUpward.com unlock code on the practice card. Make any necessary announcements. After practice is a great time to engage in conversation with the players parents.4. Mid-Practice Huddle (5-7 minutes) During this time, gather your team together to share the practice specific devotion for the week.Coach PlaybookThe coach playbook has been provided for you to use in the following areas: Suggested skills to teach with a detailed description of how to properly perform each skill. Introductory drills to help develop players basketball skills. Devotions to share at each practice. Forms to track star distribution and substitutions. Explanation of different positions on the court.

Mid-Practice HuddleAt the midpoint of every practice, you will lead a five- to eight-minute devotion during the mid-practice huddle time. The devotions teach on the character of Christ through the virtues he modeled.

This season will focus on three virtues. Each virtue will be the focus of three practices and are highlighted by one verse. Lets take a look at the virtues and verses:Practice NumberVirtueVersePractice 1None (Get to Know You time)None (practice card features TeamUpward.com launch information)Practices 2-4CourageBe strong and brave. Do not be terrified. Do not lose hope. I am the Lord your God. I will be with you everywhere you go. Joshua 1:9(NIrV) Practices 5-7RespectShow proper respect to everyone. 1 Peter 2:17a (NIrV)Practices 8-10FaithWe live by believing, not by seeing. 2 Corinthians 5:7 (NIrV)Last Practice of the SeasonGospel PresentationFor God so loved the world that he sent his one and only Son, that whoever believes in him shall not perish but have eternal life. John 3:16 (NIV)Devotion guides are found in your coach playbook as well as on MyUpward.org. It is important to prepare for each weeks devotion prior to practice.Mid-Practice HuddleAll Scripture verses for the season will be made available to players through practice cards.

On page 28 of your coach training guide is the first practice devotion. If you do not receive your coach playbook by your first practice, follow this guide during your first mid-practice huddle.Last Practice DevotionDuring the last practice of the season, you will share a special devotion with your players that reviews the seasons virtues while sharing more about Christ in preparation for the awards celebration. No matter when your last practice occurs, make sure to skip to this last devotion in your coach playbook.Practice CardsEach player will receive a practice card at the end of Practices 1, 2, 5, 8 and the last practice. With the exception of the first practice card, each one will contain the Scripture verse being learned for the next two practices as well as an unlock code for TeamUpward.com.The first practice card details does not include a verse, but gives information on how to get registered on TeamUpward.com by including a sport-specific launch code.

Green Practice StarsGreen iron-on stars known as practice stars are found in individual packets inside your coach box.These stars are distributed to each player at practice for participating in learning the Scripture verse. Players are not required to memorize the verse individually to receive a star.Players will display these stars on the sleeve of their Upward Basketball T-shirt along with the game day stars they receive.Rules Unique to Upward BasketballThe game format, rules for game play and substitution system which are unique to Upward Basketball are designed to provide the best sports experience for every child.Except where the rules to Upward Basketball apply, play is governed by the National Federation of State High School Associations (NFHS) Rules Book (www. nfhs.org).Game FormatReferees lead both teams in prayer at center court before every game. This sets the tone and focus for the game.A coin toss or other impartial method determines which team receives possession first. In jump-ball situations, possessions will alternate. This promotes fairness for both teams.Games consist of two 18-minute halves and an eight-minute halftime. This keeps games to approximately a 45-minute time frame.

The clock stops every six minutes for predetermined substitutions. This time should not be treated as a timeout. This allows coaches to match up players without wasting valuable game time.

No timeouts are used in Upward Basketball. This allows more playing time and keeps games on time.Game FormatAt the end of each six-minute segment, the team that receives the ball next is based upon the direction of the possession arrow.Teams switch goals at halftime. This evens any advantage that may occur due to the layout of the court.No scores are kept in the K5 or first- and second-grade divisions. The focus for this age is to learn fundamentals, not winning and losing.Any games ending in a tie should remain a tie. This will help keep games on schedule. This helps keep games on schedule.

All coaches will adhere to the substitution system as detailed on page 22 of your coach training guide. The substitution system allows for equal playing time for all players throughout the season.Rules for Game PlayMan-to-man defense will be played at all times. Zone defenses are not allowed. In most cases, players are guarding the opponent that closely matches ability and height, creating a more competitive system for all on the court.Defensive players must stay within arms reach of the player theyre guarding. (Isolation plays are not part of Upward Basketball because they take away the opportunity for all players to improve. This would contradict the spirit of the rules.)Rules for Game PlayDouble teaming is not allowed. However, help defense is strongly encouraged in the following instances:Offensive Picks and Screens Defensive switching is allowed on offensive picks and screens. The non-screened defender can help his or her teammate by temporarily switching until the teammate recovers to defend his or her offensive player. This is commonly referred to as help and recover.Help Defense - Picks and Screens

Rules for Game PlayDouble teaming is not allowed. However, help defense is strongly encouraged in the following instances:Offensive Picks and Screens Defensive switching is allowed on offensive picks and screens. The non-screened defender can help his or her teammate by temporarily switching until the teammate recovers to defend his or her offensive player. This is commonly referred to as help and recover.Fast Breaks During any fast break (when the team that gains possession pushes quickly into the opponents end of the court), another defensive player not assigned to the ball handler may help in order to slow or stop the fast break. Upon stopping the fast break, defenders should return to guarding their assigned players.Help Defense - Fast Breaks

Rules for Game PlayDouble teaming is not allowed. However, help defense is strongly encouraged in the following instances:Offensive Picks and Screens Defensive switching is allowed on offensive picks and screens. The non-screened defender can help his or her teammate by temporarily switching until the teammate recovers to defend his or her offensive player. This is commonly referred to as help and recover.Fast Breaks During any fast break (when the team that gains possession pushes quickly into the opponents end of the court), another defensive player not assigned to the ball handler may help in order to slow or stop the fast break. Upon stopping the fast break, defenders should return to guarding their assigned players.Lane Area If a defender is in the lane and the player he or she is guarding is within arms reach, the defender is allowed to provide help defense. Help Defense - Lane Area

The Star Distribution Form will help you track which stars players receive throughout the season. This form is located in the back of the coach playbook. These stars are to be iron onto the sleeve of the Upward Basketball T-shirt.Awards CelebrationThe awards celebration is the highlight of the entire season. This is a tremendous opportunity for you to communicate your love and support to the most important people in the leaguethe children.

You should plan to attend this wonderful time of fun and fellowship and encourage players and their family members to do the same.Upward BasketballCoach Training Conference 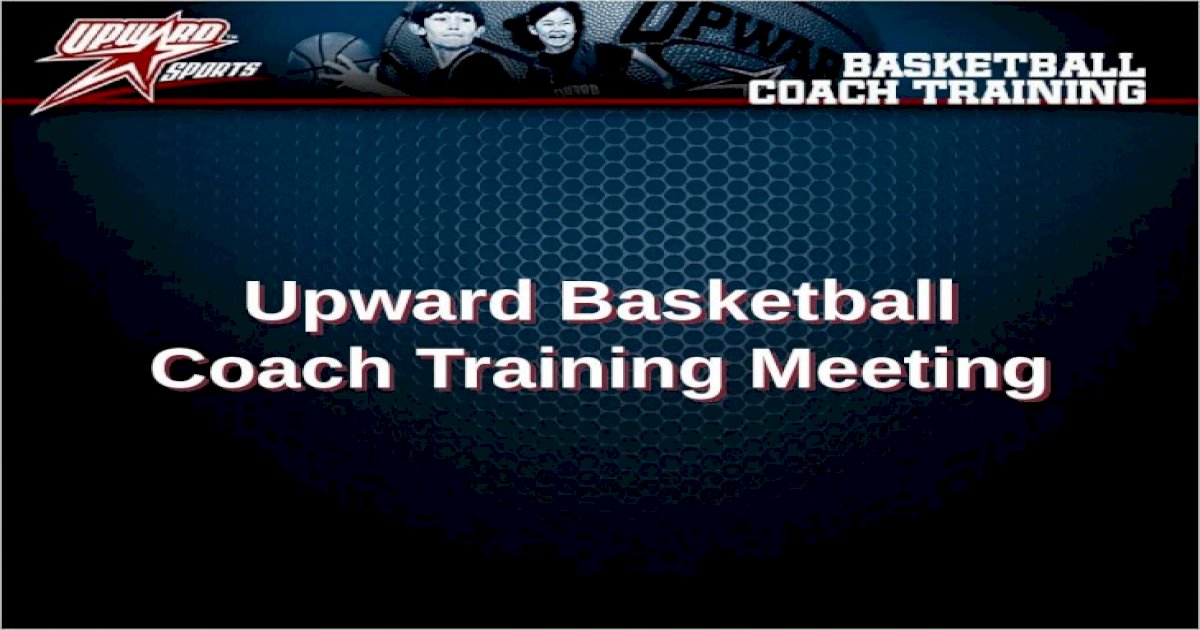 BASKETBALL COACH · PDF file UPWARD BASKETBALL COACH PLAYBOOK | 9 Skills and Drills This section reviews the fundamental skills of basketball, explains why each is important and emphasizes

Upward Basketball Coach Training Conference Bob Knight: “Basketball, more than other sports, structure & what you do in practice determines your success or ... This also gives you