Upwelling in the World Ocean Slide 2 Presentation Points Mechanisms that create ocean upwelling Types of upwelling Identifying upwelling on satellite-derived maps Ecological and economic effects of upwelling Slide 3 Mechanisms that create ocean upwelling Wind Coriolis Effect Ekman Transport Slide 4 Upwelling refers to deep water that is brought to the surface. Areas of upwelling are created by surface winds that pull water away from an area. This deficit of water on the surface invites water to come up from deeper regions. Slide 5 To understand upwelling, you must be familiar with how the Coriolis Force affects ocean surface currents. The Coriolis Effect acts on moving water, because it is not attached to the rotating Earth. As water flows over the rotating earth, it appears to deflect to the right in the Northern Hemisphere and the left in the Southern. Slide 6 Due to friction between the layers of water in the ocean and the Coriolis Effect, the net result of wind blowing across the surface of the water is transportation of a layer of water 90 degrees to the direction of the wind. This is known as Ekman Transport. Slide 7 Types of Upwelling Equatorial Coastal Seasonal Slide 8 1. Equatorial Upwelling Water Flow Upwelling Slide 9 Look at the equator in the Pacific Ocean. Slide 10 2. Coastal Upwelling (follow the black arrows) Slide 11 Whats the difference between Peru(A) and Columbia (B)? B A Slide 12 3. Seasonal upwelling Onshore winds pile water up on shore, thus surface water will be forced downward. This is downwelling. Offshore winds take water away from shore, thus water from depth will upwell to the surface. Wind Slide 13 The Monsoonal wind shifts in Oman create very different conditions. August, 1999 Offshore winds: Upwelling April, 1999 Onshore winds: Downwelling Wind Slide 14 Identifying upwelling on satellite-derived maps Sea Surface Temperature Ocean Color Slide 15 The deep water that surfaces in upwelling is cold; by looking at Sea Surface Temperature maps we can identify cool upwelled water versus hotter surface water. Slide 16 Upwelled water also contains nutrients (nitrate, phosphate, silicate) and dissolved gases (oxygen and carbon dioxide) that are not utilized at depth because of a lack of sunlight. Now on the surface, these nutrients and gases help to fuel photosynthesis by small algae called phytoplankton. Slide 17 Phytoplankton photosynthesize using specialized color pigments called chlorophyll. Thus, Ocean Color maps are another way to identify areas of upwelling. Where on this ocean color map are high phytoplankton concentrations? Slide 18 Ecological and Economic effects of upwelling: Upwelling leads to more phytoplankton More phytoplankton leads to more fish More fish lead to commercial fishing jobs and to more seafood Slide 19 Phytoplankton come in many shapes and forms. Collectively they form the base of oceanic food webs. Without upwelling many of the worlds fisheries would not thrive. Slide 20 Some climatic events can reduce upwellings. El Nino ~ Slide 21 Along Perus coast, an El Nino event decreases the coastal winds. Thus the upwelling from below is slowed. An El Nino condition results from weakened trade winds in the western Pacific Ocean near Indonesia, allowing piled-up warm water to flow toward South America. Slide 22 Even though upwelling areas account for only 1% of the ocean surface, they support 50% of the worlds fisheries. Slide 23 Productivity (phytoplankton growth) of an area is determined by the rate and the duration of upwelling. Rate of upwelling determines phytoplankton cell size. Duration of upwelling determines the total amount of phytoplankton. few vs. many small vs. large Slide 24 Classification of upwelling systems in terms of rate and duration: After Thurman, H.V. (1994) Low Medium High RATE DURATION Long Short Slide 25 Moderate rates of upwelling for long duration (8 months or longer) provide the ultimate combination for a large fishery. With too low or too high a rate, phytoplankton are small, so there is a trophic level between the algae and the fish.therefore the fish receive less energy. Slide 26 Upwelling and Fisheries Using this series of Sea Surface Temperature Maps from 1999, can you determine areas/times for possible fisheries? (Hint: Look at Perus coast in January and April. Look at the northwestern tip of Africa in July and October.) January April JulyOctober 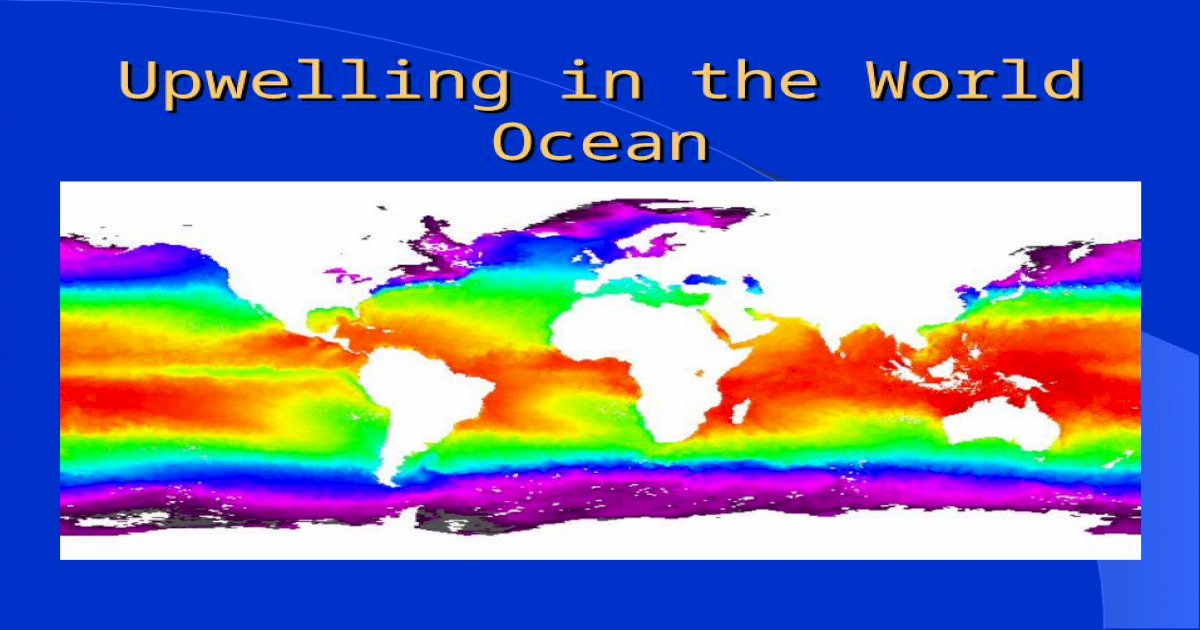 DECIPHERING THE OCEAN CLIMATE S upwelling as carbon sequestration mechanisms are being considered. The