2. Jamestown
Site of first English colony in the Americas in 1606
Located along the James River
London Company was authorized to settle in Southern Virginia
Settled Jamestown
Plymouth Company was authorized to settle Northern Virginia
Unsuccessful
104 settlers came from London with the London Company
Named colony Jamestown after King James I
3. John Smith
Set sail to Virginia on Dec. 20 1606
Elected as one of the seven council members to govern the colony
Captured by the Native Americans in 1607 and brought to Chief Powhatan
Chief Powhatan was intrigued by Smiths belongings
It is rumored that his life was spared thanks to Pocahantas
Released after four months of being held captive
1608 he was elected President of the local council
Helped the colony survive the harsh winter with strong leadership
He who does not work, will not eat
Accidentally injured and had to return to England for treatment
4. Native Americans
Algonquian Indians were natives of the land
Continuously raided and attacked the colonists settlements hoping the settlers would leave
Made life almost impossible for settlers by stealing important supplies, pistols, weapons, and food
In 1622 the Algonquians attacked settlements and killed over 300 colonists
5. Jamestown Fort
Colonists built a triangular
wooden fort around to
protect against the Algonquian
attacks
Fort enclosed a storehouse,
church and many homes
6. Culture
Main source of income came from
growing tobacco
Wealthiest of the 13 colonies
Tough conditions for survival
between attacks from Native
Americans, famine and extreme
freezes in the winter
Most women were married at age 16 and immediately started having children
Most goods used for daily life such as clothing candles and metals were made at home
7. Taverns
Taverns were the central place for drinking,
eating, socializing, entertainment and
lodging for travelers
Often music was played on the fiddle and
people would engage in singing and dancing
Taverns were not a place for proper women
and prostitutes would often be found in them
Heavy drinking took place in the taverns
People could participate in gambling over card games, cockfights and horse racing
http://www.youtube.com/watch?v=z_HUp6G85Xc
8. Williamsburg
Replaced Jamestown as Virginias capital in
1699
Williamsburg was more ideal because it
was located on higher ground and more
protected against attacks from the
Algonquians
Also moved to Williamsburg because of contaminated drinking water and dirty and unsafe living conditions in Jamestown
Named after the reigning monarch at the time, King William III
In 1780 the capital was moved once again from Williamsburg to Richmond where it remains today
9. Politics
Pre-independence people were still obligated to the crown in England many of the goods produced in settlements like Jamestown were sent back to England
Ruled by the crown until 1776
Royal governors and local elected
representatives ruled on behalf of the crown
The General Assembly which was made
up of a small group of wealthier citizens
was in charge of voting
Election day was a big social event in the
colonies 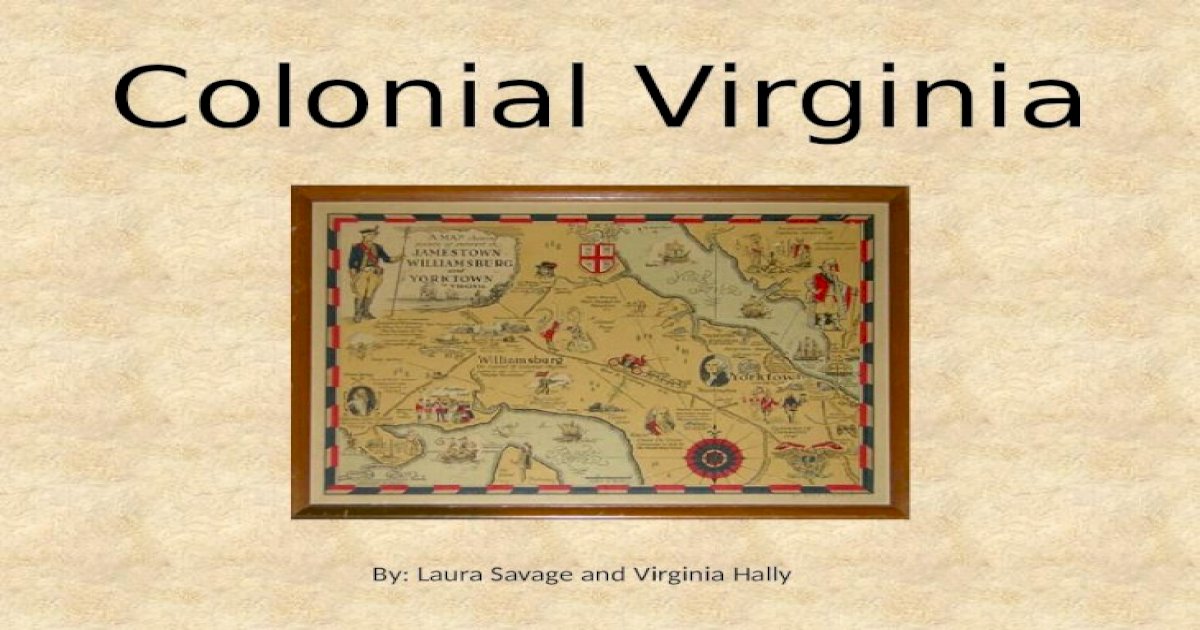