Molly AutrandEnglish 2010The Walking Dead and the Weak Female CharacterThe Walking Dead is a television series based on a post-apocalyptic graphic novel created in 2003, with the television series starting in 2010. The series is hugely popular and has been since its first episode and the reason for this is a fantastic storyline as well as strong character development. The series follows a group of people through south east United States as they work together, and at times against, to survive in a zombie infested world. At first glance at the title, one would think that it was referring to the zombies as they are walking dead. As you watch the series, you realize the title has a deeper meaning than that and refers to the group as they are the walking, with death at every turn.Anyone watching the series could pull a half dozen cultural themes from the storyline, settings, and characters but the theme that could be apparent is weak women in post-apocalyptic circumstances. On the cast list on the Internet Movie Databank web-site, it sorts the cast by order of number of episodes the characters begin with. In the top five listed, there is only one female listed (and she happens to be the fifth one). That begs a question as into why the top leading characters are men.

In looking at the additional female characters, you can clearly see their weaknesses, which is how society often time sees women. In the first season, Lori Grimes is torn between two men, her husband and Shane Walsh. Its a crazy love triangle that even when Lori becomes pregnant, the audience is never 100% sure that her husband is the father, even though she swears by it. This shows an example of the way the series characterizes women- only would a woman be concerned about the two men she loves and has sexual relationships with than the danger that surrounds her day to day. And Lori is also shown as being a type of temptress.Carol Peletier is one of the female leads that has continued with the series from day one to the current season. Although her character has grown stronger as the series progressed, she was initially seen as a submissive women who was giving in to, and then protecting, her abusive husband. She was timid and afraid and needed the men in the group to look after her. Michonne joined the team as one of the strongest female characters. She is a katan wielding, zombie killing machine. But Michonne couldnt appear to be too strong, moving into the fifth season she has taken a type of motherly role over Carl and is comforting towards Rick.A season that showcases the apparent gender roles of women is Season 3. At the end of season 2, Andrea is separated from her group after a walker takeover at Hershels farm and she is then rescued by Michonne. In season 3, Michonne and Andrea end up at a new community, Woodbury. Woodbury is ran by a sadistic and masochistic man called The Governor. The Walking Dead played up on Andreas gender by having her character become infatuated with The Governor and giving in to him. Even though her closest friend, Michonne, was telling her they needed to leave, Andrea felt as though they were ok staying in Woodbury because she wanted to trust the Governor. Even though throughout the season The Governor kept giving Andrea reasons to distrust him, she kept going back and it ended up being the death of her. The Walking Dead has been criticized for its portrayal of women and lack of strong female characters. When googling Walking Dead, gender roles there is absolutely no shortage of web-sites that are analyzing the series episode by episode and pointing these out. Even on mic.com, it points out that the female characters carry guns far less than their male counterparts. This could be translated as women being the weaker members of the group and needing the men to take care of them. In season one, Lori gives Andrea a hard time about sun tanning on the roof of the RV while Lori is washing clothes stating they need to do their part to help the camp. Thats because its the womens duty to clean and cook, rather than hunt and/or gather supplies.

Although the Walking Dead definitely has its flaws in its portrayal of women, as its been discussed in many texts previously a zombie representation of current cultural themes can be highly effective. Especially in this state, women are still being criticized for pursuing careers and having a life outside of the home. Women are expected to be homemakers with being able to cook, be fantastic (and happy) mothers, and nurturing. The Walking Dead is able to present these gender roles and stereotypes, whether on purpose or not, without appearing to be too harsh. It appears different to display gender roles by a woman washing clothes in a camp surrounded by zombies than a 1950s film of a woman in pearls and high heels serving dinner to her husband, but it really isnt that different. When questioned about his weaker female characters in an interview for The Comic Journal, Robert Kirkman (the series writer) stated "I don't mean to sound sexist, but as far as women have come over the last 40 years, you don't really see a lot of women hunters. They're still in the minority in the military, and there's not a lot of female construction workers. I hope that's not taken the wrong way. I think women are as smart, resourceful, and capable in most things as any man could be but they are generally physically weaker. That's science." Whether or not that is science, a fictional television series should be the prime time to create strong female leads. Other texts and/or films that are guilty of this (in the same genre) would be Zombieland. The two female leads, Wichita and Little Rock, use their female prowess and cunningness throughout the film starting with Wichita acting like a ditzy rich girl at the gas station and then using her flirting skills to con the gas station attendant out of all the money in his till. Although Zombieland has several scenes where Wichita and Little Rock appear to be stronger than their male counterparts, they are still playing up on gender characteristics.

As far as research goes for the Walking Dead television series, they are basing it off of the graphic novels series. Criticism online states that in the comic series, the female characters are stronger and can equally compete with the male characters. With what Robert Kirkman stated, perhaps its safe to assume that the weaker female counterparts were written in to be more accepted in the television industry and with consumers. In conclusion, although it is not ideal to have support or portray societies gender roles when you can create such strong women, using zombie texts can be a neutral way to discuss many cultural issues. The Walking Dead is a prime example and as the series progresses, it will be interesting to see if the female characters evolve any further into stronger characters or if they will continue to lag behind their male counterparts. 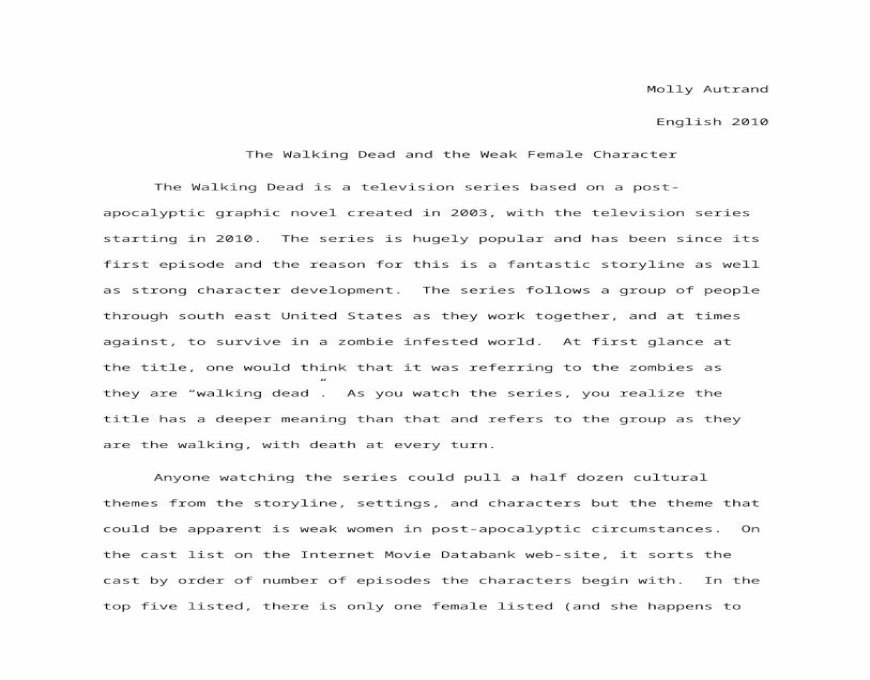