Home >Documents >Web viewoperator had to construct hotel according to plans and specifications approved by Holiday...

Web viewoperator had to construct hotel according to plans and specifications approved by Holiday...

manifestation of assent by the principal

principal has great exposure to liability so must manifest assent

manifestation of assent or consent by the agent

no contract or compensation necessary

policy: court wants injured ppl to be compensated; neither coach nor teacher can pay themselves but teachers insurance will only pay if shes found liable as principal

policy: court wants to find someone to pay back the farmers since grain elevator cant

agent is subject to principals control

Gordon v. Doty: teachers condition that only the coach drive the car was enough to establish control

even though didnt give any other instructions (route to take, speed, etc.)

Liability of Principal to Third Parties in Contract: principals are liable to third parties who are injured by breaches of contract entered into by an agent acting within the scope of his agency (authority)

Restatement (3rd) 2.01: an agent acts with actual authority when at the time of taking an action that has legal consequences for the principal, the agent reasonably believes, in accordance with the principals manifestations to the agent, that the principal wishes the agent so to act

Mill Street Church of Christ v. Hogan: church hired Hogan to paint building; decided that another man would help if he needed it; church let Hogan hire his brother in the past; Hogan hired his brother this time

implied authority is circumstantially proven by considering (a) agents understanding of his authority, (b) nature of task/job, (c) existence of prior similar circumstances

policy: church was member of workers comp. and wanted to apply policy to pay for brothers injury

Restatement 35: unless otherwise agreed, the authority to conduct a transaction includes authority to do acts with are incidental to it, usually accompany it, or are necessary to accomplish it

Ampex did nothing to dispel inference of authority, sent memo suggesting Kays had authority

absent knowledge of third parties to the contrary, agent has the apparent authority to do those things which are usual and proper to the conduct of the business he is employed to conduct

Restatement (3rd) 2.06: an undisclosed principal is liable for the acts of an agent on the principals behalf without actual authority if the principal, having notice of the agents conduct and that it might induce third parties to change their position, didnt take reasonable steps to notify third parties of this

note: compare Restatement to common law, which doesnt require principal to have notice of agents behavior

Watteau v. Fenwick: Humble sold pub but stayed on as manager; only had authority from new owners to purchase certain items but purchased others on owners credit; third party he purchased from didnt know he was an agent (thought he still owned pub)

new owners are still liable for the acts of Humble, even though they were contrary to his authority

policy: if something is not within ordinary course of business, third parties are more on notice to think something is wrong; but would impose too high monitoring cost to make undisclosed principal liable for all actions of agent

(1) ratification is the affirmation of a prior act done by another, whereby the act is given effect as if done by an agent acting with actual authority

(a) manifesting assent that the act shall effect the persons legal relations, or

husband never said he was acting on behalf of his wife, so she couldnt have ratified the agreement by accepting lease payments

Restatement (3rd) 2.05: a person who has not made a manifestation that an actor has authority as an agent and who is not otherwise liable as a party to a transaction purportedly done by the actor on that persons behalf is subject to liability to a third party who justifiably is induced to make a detrimental change in position because the transaction is believe to be on the persons behalf if:

(1) the person intentionally or carelessly caused such belief, or

Hoddenson v. Koos Bros.: woman went into dept. store to buy furniture and was assisted by fake salesman who took her cash; she never got the furniture

no actual or apparent authority, no ratification, no undisclosed principal

solely through lack of stores reasonable surveillance and supervision, an imposter falsely impersonated himself as an agent of the store

Koos Bros. acted in a way that allowed plaintiff to be fooled 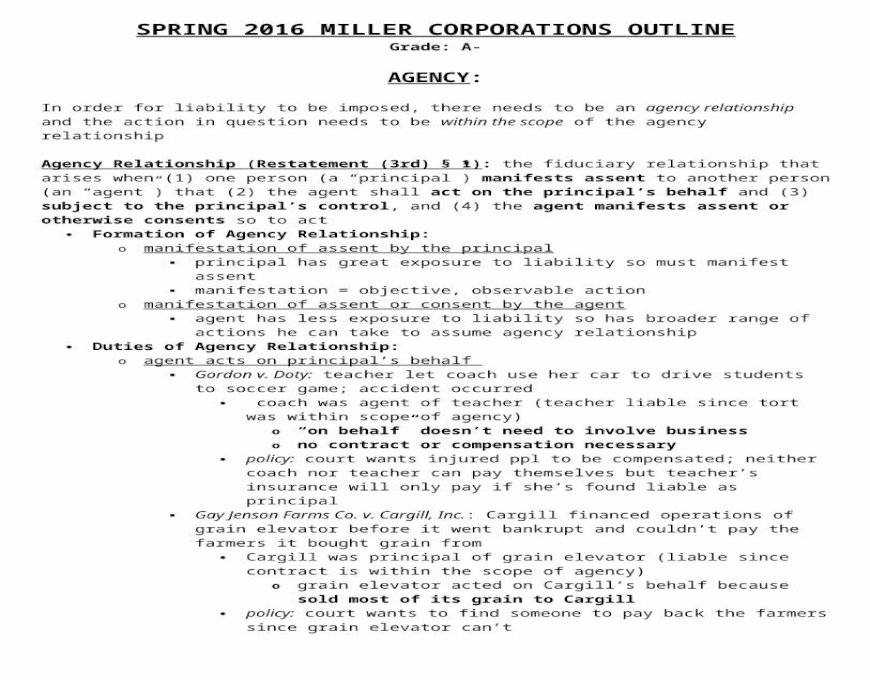