Better Off FriendsElizabeth Eulberg. Point.For Macallan and Levi, it was friends at first sight. They hang out after school and share inside jokes, and their families are close. They are platonic and happy, except they keep getting in each others way. If they become more than friends, will it be worth the complications?

The Body in the WoodsApril Henry. Henry Holt.Three very different teens join Portland County Sheriffs Search and Rescue to search for an autistic man lost in the woods, but what they find instead is a dead body. In a friendship forged in danger, fear, and courage, they work to find the victims killer before its too late.

The Body in the Woods. April Henry. Henry Holt.

The value of young adult literature is certainly not something new, but it is true that its popularity is increasing at a rapid rate. According to the Association of American Publishers, YA book sales increased by 22.4% during the first three quarters of 2014 compared with the year prior. And we believe its safe to say the books included on this list are going to keep those stats high.

The Young Adults Choices project began in 1986, funded by a special grant given to what was then the International Reading Association (now the International Literacy Association), and was supervised by the Literature for Young Adults Committee. The goals of the project are to encourage young people to read; to make teens, teachers, librarians, and parents aware of new literature for young adults; and to provide middle and secondary school students with an opportunity to voice their opinions about books being written for them.

*City of Heavenly Fire: The Mortal Instruments, Book SixCassandra Clare. Margaret K. McElderry.Darkness has descended on the Shadowhunter world. Chaos and destruction overwhelm the Nephilim as Clary, Jace, Simon, and their friends band together to fight the greatest evil they have ever faced. Sebastian Morgenstern is on the move. Lives are lost, love is sacrificed, and the whole world changes.

Cress: The Lunar Chronicles, Book ThreeMarissa Meyer. Feiwel & Friends.The fugitives Cinder, Captain Thorne, Scarlet, and Wolf plot to overthrow Queen Levana and her army, and their best hope lies with Cress, who has been trapped on a satellite since childhood. After a daring rescue, Cress finally wins her freedom, but at a high price.

The CrossoverKwame Alexander. HMH Books for Young Readers.Josh Bell and his twin brother, Jordan, are awesome on the basketball court. They must come to grips with growing up on and off the court as they realize breaking the rules comes at a terrible price. This storys heart-pounding climax proves to be a game changer for the entire family.

Cruel BeautyRosamund Hodge. Balzer + Bray.Betrothed to Ignifex, the evil ruler of her kingdom, Nyx has always known her fate was to marry him, kill him, and free her people from his tyranny. But on her 17th birthday, she moves into his castle, and nothing is what she expectedparticularly her charming and beguiling new husband.

DangerousShannon Hale. Bloomsbury USA Childrens.At a NASA-like summer boot camp, Maisie Danger Brown uncovers a conspiracy, making her the only person standing between Earth and annihilation. Just a regular girl from Salt Lake City, Maisie must devise a plan to save the world and courageously act before she loses her heartand her life.

Divided We Fall: Divided We Fall, Book OneTrent Reedy. Arthur A. Levine.Danny Wright enlisted in the Idaho National Guard because he wanted to serve his country. When the governor orders the Guard to police a protest in Boise, his gun misfires, causing 12 to die. As tensions build, a second American civil war could be in the offing.

Dont Look BackJennifer L. Armentrout. Disney-Hyperion.Before she disappeared with her best friend, Cassie, everyone said Sam had it allpopularity, wealth, and a dream boyfriend. Now she has resurfaced, but Cassie is still missing. She doesnt know who she is or what happened that fateful night. Will Sam remember before its too late?

Escape From Lucien: Amulet, Book SixKazu Kibuishi. Graphix.Navin and his classmates journey to Lucien, a city ravaged by war and plagued by mysterious creatures, where they search for a beacon essential to their fight against the Elf King. Meanwhile, Emily heads back into the Void with Max, one of the Elf Kings loyal followers, where she learns his darkest secrets.

Far From YouTess Sharpe. Disney-Hyperion.Sophie and her best friend Mina are confronted by a masked man in the woods. Sophie survives, but Mina is not so lucky. When the cops cast blame on Sophie, no one believes her innocence. After a forced stint in rehab, Sophie returns home to find the truth on her own.

Fat Boy vs. The Cheerleaders (Paperback title: Gabe Johnson Takes Over)Geoff Herbach. Sourcebooks Fire.Its geeks versus jocks in an epic battle of the beverages! Gabe, aka Chunk, a marching band geek, drowns his dysfunctional family woes in a voracious soda habit. When the proceeds from the schools soda machine are transferred from the band to the cheerleaders, hijinks and trouble ensues. Revenge can be sweet.

Girls Like UsGail Giles. Candlewick.Quincy and Biddy are both graduates of their high schools special ed program, but they are quite different. Suspicious Quincy aggressively faces the world, while gentle Biddy is frightened to move outside her front door. As roommates in their first real world apartment, they must rely on each other to survive.

The Here and NowAnn Brashares. Delacorte.Prenna James came to New York from a different timea future where a mosquito-borne illness has mutated into a pandemic, leaving the world in ruins. Those who escaped to the present day must follow a strict set of rules to ensure future survival. When Prenna finds forbidden love, everyones life is in danger.

Far From You. Tess Sharpe. Disney-Hyperion.

The Impossible Knife of MemoryLaurie Halse Anderson. Viking Books for Young Readers.For the past five years, Hayley Kincaid and her father, Andy, have been on the road, never staying long in one place as he struggles to escape the demons that have tortured him since his return from Iraq. When they return home, Hayley hopes for normalcy and a boyfriend.

In Real LifeCory Doctorow. Ill. Jen Wang. First Second.Anda is obsessive about Coarsegold Online, a massive multiplayer role-playing game, where she can be a leader, a fighter, and a hero. When Anda befriends a Chinese player who violates the rules, she realizes questions of morality are complex when the virtual world meets reality.

The Iron Trial: Magisterium, Book OneHolly Black and Cassandra Clare. Scholastic.Call has been warned by his father to stay away from magic. But despite his best efforts, he succeeds at Iron Trial and is admitted into the Magisterium. Call finds a place thats both sensational and sinister, with dark ties to his past and a twisty path to his future.

The Night GardenerJonathan Auxier. Abrams.In this spine-chilling fable, two abandoned Irish siblings travel to work as servants at a creepy, crumbling English manor house that is as mysterious as the inhabitants themselves. Soon the children are confronted by a mysterious stranger and an ancient curse that threatens their lives.

NogginJohn Corey Whaley. Atheneum Books for Young Readers.When Travis Coates died from leukemia, his head was removed and stored in a freezer. Five years later, it was reattached to some other guys body. Yes, Travis is still 16, but everything and everyone around him has changed. How can the new Travis and the old Travis exist together?

The Only Thing to FearCaroline Tung Richmond. Scholastic.Its been nearly 80 years since the allies lost WWII in a crushing defeat against Hitlers genetically engineered super soldiers. Zara lives a life of oppression in the Eastern America Territories. A revolution is growing, and a rogue rebel group is plotting a deadly coup. Can Zara help take down the Fhrer?

Rebel Belle: Rebel Belle, Book OneRachel Hawkins. G.P. Putnams Sons Books for Young Readers.After a strange dispute at a homecoming dance, Harper Price is imbued with incredible abilities. She becomes a Paladin, one of an ancient line of guardians with agility, super strength, and lethal fighting instincts. When Harper finds she is charged to protect David Stark, the subject of a mysterious prophecy, life gets complicated.

The Rule of ThreeEric Walters. Farrar, Straus and Giroux.One shocking afternoon, computers around the globe shut down in a viral catastrophe. Driving home, Adam encounters a storm tide of anger and fear as the region becomes paralyzed. As resources dwindle, crises mount, and chaos descends, he will see his suburban neighborhood band together for protection and survival.

RumbleEllen Hopkins. Margaret K. McElderry.After Matthews younger brother Luke commits suicide, his family struggles to make sense of the situation. Matthew blames himself for not doing more to prevent the bullying that Luke, who was gay, experienced. As Matthew becomes increasingly cynical and unforgiving, it seems not even his girlfriend, Hayden, can help, until the unexpected happens.

Since Youve Been GoneMorgan Matson. Simon & Schuster Books for Young Readers.Before Sloane, Emily didnt go to parties. She barely talked to guys and didnt do anything crazy. Enter Sloane, a social tornado and the best kind of friend. Sloane disappears, however, leaving a list with 13 bizarre tasks for Emily to accomplish. What will Emily do?

*SistersRaina Telgemeier. Graphix.Raina and Amara are sisters, but their relationship isnt perfect. Raina is a music-loving homebody, while her little sister is outdoorsy, adventuresome, and constantly getting on Rainas nerves. When a baby brother enters the picture and something doesnt seem right between their parents, they must figure out a way to get along.

To All the Boys Ive Loved BeforeJenny Han. Simon & Schuster Books for Young Readers.Lara Jean Song has five secret love letters in her hatbox, one to each boy shes ever loved. When the letters are unexpectedly mailed, Lara Jeans love life goes from imaginary to out of control.

True or False?DK Publishing.This browsing treat offers tidbits on topics that include nature, space, history, culture, and the human body. Each page presents a piece of information commonly believed to be true; the book then sheds light on the facts veracity and also includes some related content.

The Walled CityRyan Graudin. Little, Brown Books for Young Readers.Jin, Mei Yee, and Dai all live in the Walled City, a lawless labyrinth run by crime lords and overrun with street gangs. Teens must traffic drugs or work in brothelsor, like Jin, hide. But when Dai offers Jin a chance to find her lost sister, she begins a breathtaking race to escape.

*We Were LiarsE. Lockhart. Delacorte.Beauty and wealth cant overcome the disaster caused by a group of four friends: the Liars. When a revolution leads to an accident, secrets are kept, and lies are told. The truth is buried deeply in the mind of a brilliant, damaged girl, where reality becomes an illusion.

*Books that received the highest amount of votes.

We Were Liars. E. Lockhart. Delacorte.

For more information on the Young Adults Choices list, or to learn how to become involved, visit literacyworldwide.org/choices.

Graphix.Far From You. Tess Sharpe. Disney-Hyperion.Fat Boy vs. The Cheerleaders (Paperback title: Gabe

*Books that received the highest amount of votes. 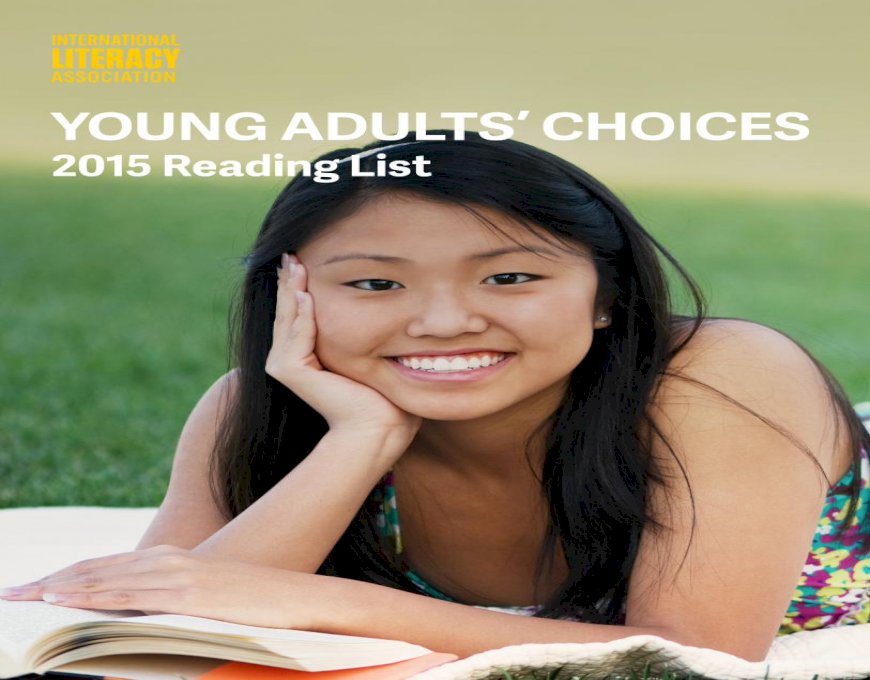