23COMPANY PROFILELarsen & Toubro Limited (L&T) is amongst one of the Indias largest technology, engineering construction and manufacturing conglomerate.

L&T is considered to be the "bellwether of India's engineering sector, and was recognized as the company of the year in 2010.

L&T has an international presence. The company's businesses are supported by a wide marketing and distribution network, and have established a reputation for strong customer support.

With more than a seven decades of dedicated customer-focused service and continuous quest for world class quality have established them as the leader of the E&C sector in India.34HISTORYThe evolution of L&T into the country's largest engineering and construction organization is among the most remarkable success stories in Indian industry.

L&T was founded in Bombay (Mumbai) in1938by two Danish engineers, Henning Holck-Larsen and Soren Kristian Toubro. Both of them were stronglycommitted to developing India's engineering capabilities to meet the demands of industry.

In the year 1950, L&T became a Public Company with a paid-up capital of Rs.2 million and a sales turnover of Rs.10.9 million that year.And now, In 2012 the company generated a total revenue of US $13.5 billion.

RATIO ANALYSIS7788LIQUIDITY RATIOSCan they meet their current obligations?? 99 CURRENT RATIOIt is a measure of the firms short term solvency i.e., it indicates the availability of current assets in rupees for every one rupee of current liability. It represents a margin of safety for the creditors of the firm.CR(times)YEAR1.1020061.0320070.9220081.1820091.0220101.0220111010 QUICK RATIOQuick Ratio a.k.a. Acid-Test Ratio establishes relationship between quick assets and current liabilities, where quick assets refer to those assets which can be converted into cash immediately or reasonably soon without loss of value.QR(times)YEAR0.7920060.7120070.6120080.8620090.6920100.602011111112Liquidity refers to the readiness of assets to be converted to cash. They give a general idea of the firm's ability to pay its short-term debts.

Ideally the current ratio should be greater than 1.5. Though there can be exceptions, some good companies can have less than 1 or even a negative current ratio when they receive money faster from their customers than they have to pay to their vendors.

So, we can say that L&T will not be able to meet its current obligations as long as they do not use their inventories efficiently as its inventories form a large part of their current assets.

Lower value of debt ratio is favorable and a higher value indicates that higher portion of company's assets are claimed by it creditors which means higher risk in operation.

In case debt ratio is less than 0.5.This indicates that companys assets are financed through equity and less of debt, lower values of debt-to-equity ratio are favorable indicating less risk. Thus, the company is less riskier.

L&T has low proportion of debt in its capital structure and thus the assets supported by them and cost of debt against a rupee of equity show a similar trend.17ICR(times)YEAR12.47200624.29200728.63200812.94200913.47201010.90201118INTEREST COVERAGE RATIOICR a.k.a. times-interest-earned is used to test the firms debt servicing capacity. It shows the number of times the interest charges are covered by funds that are ordinarily available for their payment.1819ANALYSIS: (COVERAGE RATIOS)The higher the coverage ratios the less a company is burdened by debt. If a company has no debt or the loan interest is being paid by interest income from investments or other activities the ratio is zero which of course is excellent.

A negative ratio tells us that the company cannot even pay its interest on loans from its operating income, stay far away from such companies.

Debtors turnover indicates the velocity of debt collection of a firm.Lower debtor turnover ratio is bad because it means, slowly, money is being collected and liquidity position will become weak.

It also indicates that the cost of goods sold remains constant and there is an increase in the proportionate volume of higher margin items.

The company has increasing profits till the year 2010 after which there is a slight depreciation which can be a result of the global economic slowdown.

RONA- . An improving trend in this ratio indicates that the institution is increasing its net assets and is likely to be able to set aside financial resources to strengthen its future financial flexibility.

Overall, the companys return on investment and equity is considerably good till the year 2009.After that the companys position deteriorates to a little extent.36EPS(Rs.)YEAR7.3620064.9520077.4320085.9420097.2720106.50201137Earnings Per ShareThis is the amount of income that the common stockholders are entitled to receive (per share of stock owned). This income may be paid out in the form of dividends, retained and reinvested by the company, or a combination of both.

A high P/E ratio may signify that the company is overvalued, which means that eventually market forces will drive the price down.

On the other hand, a high P/E could indicate great earning power and the possibility that profitability will increase over time, justifying the higher price. Thus, the company has high earning power.43

INDEX ANALYSIS444445The analysis of a company's financial statements by comparing current data with that of a previous year, or base year. Base-year analysis allows for comparison between current performance and historical performance.INDEX ANALYSIS45BALANCE SHEET : ASSETSYEAR200620072008200920102011Net Fixed Assets100

The positive inter-annual trends in the income statement components, both income and expense, have lifted the company'sprofit margins.

In the case of L&T, it experienced a major increase in sales for the period reviewed and was also able to control the expense side of its business. That's a sign of a very efficient management.49

It also allows for the analysis of a company over various time periods, revealing, for example, what percentage of sales is cost of goods sold and how that value has changed over time.

In this case, the sales had been considerably good till 2010 and then from the year 2010 to 2011 the income or the earnings of the company decreased.5556SWOT ANALYSIS5657STRENGTHS L&T has successfully outperformed its rival companies (HCC, NCC, Punj Lloyd) due to superior product performance. An awesome brand image, being Indias largest E&C company. L&T has great infrastructure spending plans that build a strong business prospect. Lower response time with effective and efficient service that ensures a high degree of customer satisfaction. L&T has a dedicated workforce of over 45000 employees, aiming at making a long-term career in the company.

5758WEAKNESSES In spite of L&Ts global presence, it is not very popular in the international market. The customer service staff still needs training specially in the delivery and help desk areas, that threaten inviting new clients. Sectoral growth is constrained due to low unemployment levels and competition for staff. There are some gaps in range for certain sectors like global delivery management, processes and systems, that somehow have management issues.

58OPPORTUNITIES59 Demand of its services in Middle East, Europe and South-East Asia. L&T is good at converting adversities into opportunities and continue its march of progress . The end-users respond positively to new ideas, so there exists a great possibility that L&T could extend to overseas broadly. Mainframe management capabilities will give opportunity to L&T-Ites to go for large infrastructure deals and hosting biz.

5960THREATS Legislation could make an impact over L&Ts business proceedings. In spite of being among the most dominant conglomerate in the country, L&T may be vulnerable to reactive attack by its major competitors. Lack of infrastructure in rural areas could constrain investment. The high volume/low cost market is intensely competitive.6061CONCLUSIONOverall, the company is in a fairly good position till the year 2010.Although 2010 to 2011 period saw a downfall in the performance but this can be due to global economic slowdown.

The companys profit ratios indicate that is has high profit margins and thus it is safe to invest in this company.Other analysis techniques also reveal that sales of the company have been considerably good.

Thus, the company is worth of the appreciation it has received.6162

62Referrences63 Wikipedia www.larsentoubro.com www.moneycontrol.com www.cnbc.com Financial Management by I M Pandey63THANK YOUso much for bearing us for the past 20 minutes..6464 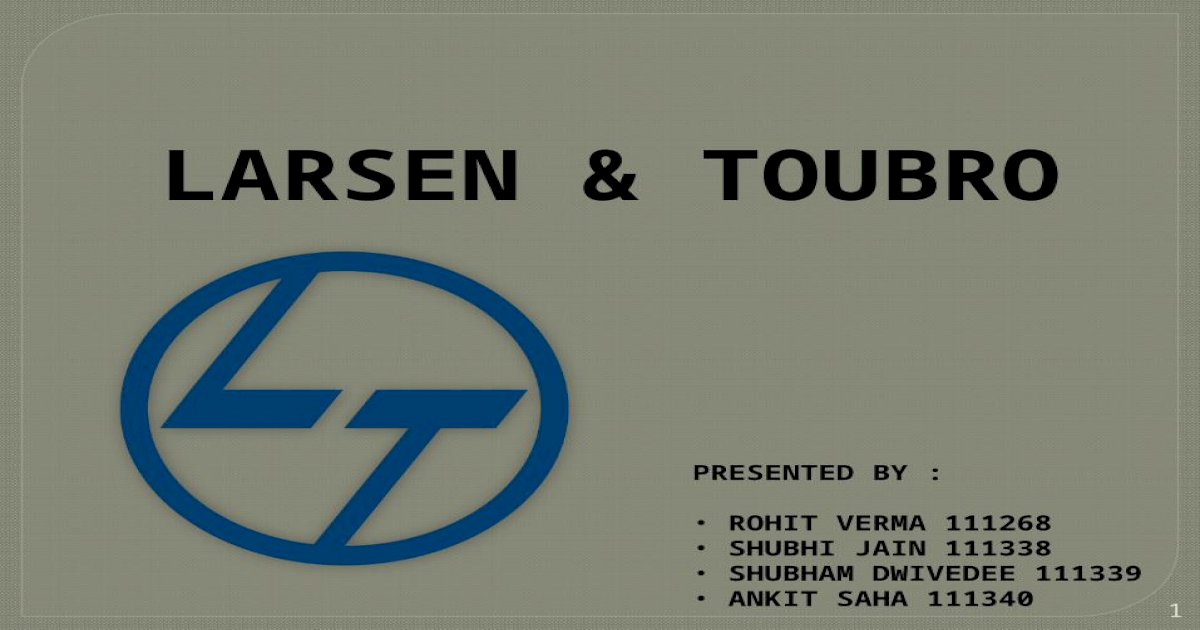