India must protect its food-givers

The slogan Jai Jawan Jai Kisan holds resonance for the spirit of those who secure us along the borders and those who provide us food. But over the years, our ‘kisanconsciousness’ just seems to have vanished into thin air, leaving millions of our farmers struggling for a basic livelihood. We appear to have consistently evaded our responsibility leaving our food givers with everyday agony and forcing them to commit suicide, almost by the hour. Over 300,000 farmers have committed suicide in India since 1995.

A majority of them are concentrated in five major agricultural states of the country - Maharashtra Madhya Pradesh, Andhra Pradesh, Karnataka and Chhattisgarh. Punjab and Tamil Nadu are catching up and many others are joining the list. Farmers’ suicides have been steadily increasing. On an average, some 16,000 farmers ended their lives each year between 1995 and 2003 and it has been increasing since then.

India is an agrarian economy with more than 70 per cent citizens depending directly or indirectly on agriculture. But it seems a nation of billions is heartlessly and silently witnessing its life-givers dying so helplessly. Today there is urgent need for greater awareness of the problem.

Why are farmers forced to kill themselves? Vagaries of the monsoon, flood, drought, high debt, unthinkable pressures to pay off loans, unkind government policies and sometimes personal problems lead to sheer helplessness. But it seems some politicians and ruling parties in states as well at the Centre have discovered new alibis – marital discord, love affairs and impotency – to explain farmer suicides.

While nothing can be more farfetched than assumptions like these, it is not really shocking because often thoughtless and non-functioning bureaucrats feed such irrational hypotheses to unconcerned ministers who parrot them without checking facts. The logic is simple. The more they invent new reasons for farmers’ suicides, the less may be the blame on the government. There are two types of farmers; the rich and the poor.

According to official figures, rich farmers, with large land holdings constitute only 5 per cent of the farming population. The rest are medium and mostly poor. The poor ones form bulk of the farming community and they either have only a few bighas of land or have been reduced to being landless agricultural labourers. Needs of their family and the aspiration to upgrade make them cultivate the lands of village landlords or ‘zamindars’ on a sharing basis. For this, many take loans from moneylenders who are often the big landowners themselves.

If because of a bad monsoon or any other reason the crop fails, the farmers lose on two fronts - less produce and inability to pay off loans. This cycle of misery goes on season after season. But why do farmers take loans from private money-lenders at higher interest rates and with stringent conditions; why not from banks when we have a robust banking system? Sadly, even shockingly, our banking system is rich-friendly.

It may be impossible to obtain even a small loan without pledging an asset. Poor, landless farmers have nothing to offer and are thus kept out of the loop. So the cycle continues for poor farmers and they are forced to die with debt. It’s an irony that our banks are bleeding with over Rs.9 lakh crore as Non Performing Assets standing as loans to the rich who lead expansive lives, while poor farmers kill themselves every day.

This must change. Indian agriculture is almost fully dependent on Nature’s moods and the crop pattern is based on that. Kharif and Rabi indicate the two crop-growing seasons. Kharif crops are monsoon crops such as rice, moong, corn, sugarcane, cotton etc.; they are sown in May-June and harvested in OctoberNovember.

Rabi crops like wheat, mustard etc. are grown during the winter - their seeds are sown at the beginning of winter and are harvested in spring. If the weather lets the farmer down, the crops fail. Going by rainfall data of the last 100 years, it is clear that almost every year or two, drought chases some regions of India and at times many, thus severely affecting all calculations of farmers and planners. We must educate people. In a country where people in the system are ignorant and unmindful of the basic crop blueprint, can we really expect them to understand the woes of farmers and deliver solutions?

How can we have the focus on something that’s not in our knowledge bank or active consciousness? Why just babus and irresponsible Members of Parliament I bet 80 per cent of our students in great universities and institutions, readying to become future policy makers or planners, have little knowledge about Rabi or Kharif crops and how they are linked to a farmer’s life and future.

It’s time to work at the grassroots in order to transform the status of agriculture and lives of farmers, once and for all. Recently Chief Justice J. S. Kheher and Justice D.Y. Chandrachud, agreeing with the Centre, observed that time and proper management were needed for implementation of policies and that farmers’ suicides cannot be tackled overnight. True, no big problem can possibly be solved overnight, but I think the ‘words and tone’ of our learned judges here should have been of grave ‘concern and caution’ rather than trite logic applicable almost anywhere.

At the very least they could have appointed a high level committee under the chairmanship of a retired Supreme Court Judge with five experts on agricultural-related issues as members. The issue calls for determined will. It requires remedial measures at all levels.

No issue of national dimension can be dealt with overnight. However the incidence of suicides – by the day, by the hour almost – should provoke realisation of an emergency situation, one that demands urgent justice. What should the government do now? I often hear thinkers, planners and concerned citizens ask about a problem that has not just become a national stigma but has been eluding solutions.

The need of the hour is innovative thinking to transform the agriculture sector and the lives of our farmers. In every district, we should have multiple vegetable mandis - small, medium and large - proportionately customized as per needs. The idea should be to provide easy and instant access to poor farmers, many of whom can’t even carry produce to a distant marketplace.

The government should encourage either public-private partnerships or even private sector initiatives to bring about a coldstorage revolution in the country. Our vast country needs thousands of areaspecific mini cold-storages, so that farmers of nearby villages can store their produce without fearing wastage and the compulsion to sell at distress prices. As a country with varied geography, we have large banks of fertile lands suited for specific vegetables and fruits or particular grains. After studying land potential, we must create SAZ - special agricultural zones - and encourage farmers to go for specific cultivation for best export quality produce.

Let this produce from our SAZs be exported around the world to ensure more profits for our farmers. Let our young men and women be trained with required skills to understand the cultivation process, crop-insurance, packing of products, branding, global market dynamics, export and international distribution processes so that they become facilitators for our simple farmers. In return, they should get exclusive commissions out of the profit.

By this device, we can solve the problems of youth unemployment and at the same time vastly transform the lives of poor farmers too. The Prime Minister is an astute and resolute planner. He has been trying to create a niche for the nation in the new age world.

His transformative zeal and skill are not hidden from anyone. One hopes that understanding the extreme plight of the poor ‘food givers to the nation’, he would create happiness for them and stability for the nation.

(The writer is Chairman, Paras Foundation and can be reached at praveshjai 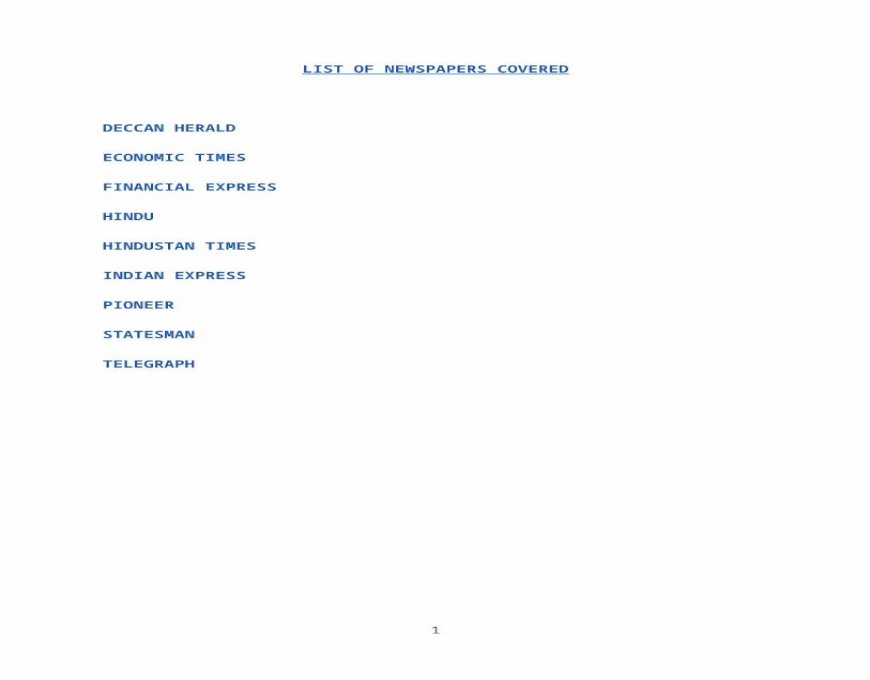 LIST OF NEWSPAPERS COVERED - Indian Institute of iipa.org.in/www/iipalibrary/iipa/news/FEB 1-7, 2017.docx  Web viewIn the case of a natural calamity or for security reasons, ...

LIST OF NEWSPAPERS COVERED - INDIAN iipa.org.in/www/iipalibrary/iipa/news/JAN 1-7, 2017.docxWeb viewImmediately after the harvest, the supply consists of the completely unrewarding

LIST OF NEWSPAPERS COVERED 1-¢  Web view The idea that, instead of confronting one another, countries