DownloadReport this document
Share this document with a friend
Transcript:
Nature of deactivation in SOFC anode catalysts in the presence of H2Sature of deactivation in SOFC anode catalysts in the presence of H2S
Nandita Lakshminarayanan1, John Kuhn and Umit Ozkan1* 1The Ohio State University, Columbus,Ohio 43210 (USA)
*[email protected]
Introduction
Solid Oxide Fuel Cells (SOFC) are the most desirable fuel cells for stationary
power generation and as auxiliary power sources in transport applications. The fuel flexibility and higher efficiency of an SOFC make it a favorable choice. The state of the art Nickel over
Yttria stabilized Zirconia(Ni-YSZ) anode catalysts exhibit very good catalytic activity towards
hydrocarbon reforming and good compatibility with the rest of the SOFC system, but are highly susceptible to poisoning due to sulfur in the fuel. Even 50ppm of H2S in the fuel is
enough to cause significant deactivation of the catalyst[1]. It has been found that the
deactivation is mostly on the catalyst surface and it is worsened in the presence of water[2]. Sulfur seems to compete with the same types of surface sites as the reactant molecules. The
presence of water seems to induce rearrangement of surface sites over these catalysts. Initial
results suggest that this rearrangement is irreversible and temperature dependant.
Materials and Methods
The Ni-YSZ used was obtained from a commercial manufacturer. The various sulfur
treatments were performed ex-situ at 700 °C using the stated concentrations of H2S in N2. Temperature programmed reaction tests were performed with an Autochem II 2920
(Micromeritics) at atmospheric pressure (0.97 atm). The reactor effluent was analyzed by a
Cirrus RGA-MS (MKS instruments). The Temperature Programmed Desorption studies were done using a Thermo-Finnigan Trace Ultra differential scanning quadrupole (DSQ) gas
chromatograph/mass spectrometer (GC/MS). Several bulk and surface sensitive techniques
were used to study the catalysts after the various treatments.
Results and Discussion
Methane steam reforming and Methane oxidation experiments were conducted over
the Ni-YSZ catalysts with and without H2S exposure. In Figure 1, the mass signals for different species are shown for the four experiments. In the case of the steam reforming reaction, there is
a complete loss in activity at higher temperatures over the sulfur treated samples. , In methane
oxidation, however, the catalyst retains its activity with H2O and CO being the primary products. In-situ and post-reaction characterization has shown that the activity loss observed in
methane steam reforming can be attributed to water-induced surface site rearrangement.
The effect of S on the surface of Ni-YSZ was also examined using CO as a probe molecule during in-situ DRIFTS studies. Figure 2(a) shows DRIFTS spectra taken during a
TPD, following CO adsorption on the fresh Ni-YSZ surface. The only band observed was at
2042 cm-1 and was attributed to linearly adsorbed CO on metallic surface sites. When CO was adsorbed after Ni-YSZ was treated in 50 ppm H2S at 700°C for 5 h (Figure 2(b)), instead of the
linearly adsorbed CO, bidentate and monodentate carbonate species were observed. These
results show that the inhibition effect of sulfur can manifest itself in different ways, by direct adsorption on active sites and by stabilizing the carbonate species which remain on the surface
up to 500 °C.
Figure 1. Mass signals for various species from temperature programmed reaction experiments
a) Methane Steam Reforming b) Methane Oxidation, over Ni-YSZ with and without H2S
pretreatment.
Figure 2. DRIFTS spectra of TPD following CO adsorption on Ni-YSZ a) Without and b) With exposure to H2S.
Significance
SOFCs are envisioned to operate as onboard reformers, as well as in coal gasification plants,
where traces of H2S and other sulfur species exist in the fuel feed even after cleaning. For
SOFCs to become commercially viable, it is important to understand the deactivation and regeneration mechanisms better to develop more tolerant catalyst systems.
References
1 Y. Matsuzaki, I. Yasuda, Solid State Ionics 132 261 (2000). 2 J.*. Kuhn, *. Lakshminarayanan, U.S. Ozkan, Journal of Molecular Catalysis. A,
Chemical 282 9 (2008). 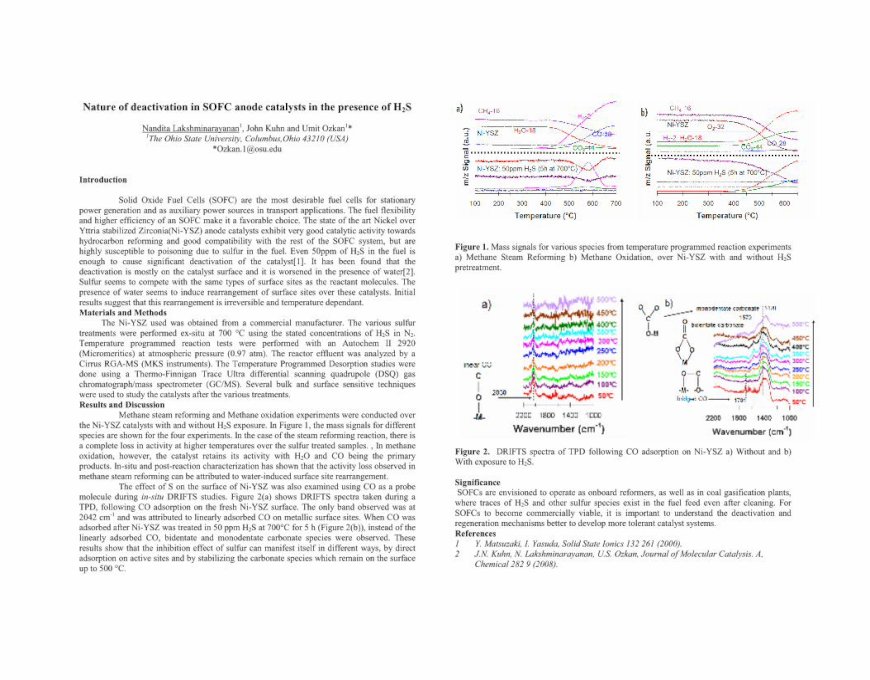 Catalysts in SOFC Use of Raney Nickel in Infiltration at Anode Advisors: Professors Trumble and Slamovich