KARNATAKA MILK FEDARATION, DHARWAD.A Project Report submitted in partial fulfillment of the Requirements for the award of the degree of

Under the guidance of

DEVELOMENT OF DAIRY INDUSTRY IN INDIADuring the Pre-independence year there was no serious stress given to dairy industry. In 1886 the Department of Defense of the British Government established the dairy farms for the supply of milk to the British troops in Allahabad. Later, in 1920 serious steps were taken by Mr. William Smith, an expert in dairy forming to improve the milk production There was discrimination done to the Indians hence this led to the rise of the first milk union in India. In Luck now in 1937 called the Luck now milk producers Co-operative union Ltd. In 1946 AMUL (Anand Milk Udyog Ltd) was started in Gujarat to bring up the economic stability of villagers. The dairy and Animal Husbandry received serious attention after the independence. There were lot many of progressive steps taken by the government through five year plans. This led to the formation of National Dairy Development Board in 1965 & thus in 1970 he decided to Bring a White Revolution through out the country, Initially 10 states were selected were for this purpose excluding Karnataka.

Dharwad Milk Union Ltd. KMFIn Karnataka in 1974 an integrated project was launched to restructure and reorganize the dairy industry on Co-operative principle of AMUL and to lay foundation for new direction in dairy industry.

NATIONAL DARIY DEVELOMENT BOARD: HistoryThe NDDB was founded to replace exploitation with empowerment, tradition with Modernity, Stagnation with growth, transforming dairy into and instrument for the development of Indians rural people. The NDDB was established in 1965; the board is registered under the Societies Registration Act and the public Trust Act, fulfilling the desire of the Prime Minister of India the late Lal Bahaddur Shastri to extend the success of the Kaira Co-operative Milk producers union (AMUL) TO OTHER PARTS OF India. Dr Vergese Kurien was the founder chairman. The success combined the wisdom & energy of farmers with professional management to successful capture liquid milk and milk product markets while supporting farmers investment with inputs and services.

The GrowthNDDB began its operations with the mission of making dairying a vehicle to a better future for millions of gross roots milk producers. The mission archived helped to launce Operation Flood, a programme extending over 26 years and with the help of World Bank Loan India become the worlds largest milk producing country. As per March 2001 Indias 96000 Dairy Co-operative are integrated thorough a three Tier Ccoperative structure. The Anand pattern, which is owned by more than 10

Dharwad Milk Union Ltd. KMFmillion formers, procures an average of 1605 million liters of milk everyday. The milk is processed and marketed by 170 milk producers cooperative unions which, in turn own 15 state co-operative milk marketing federation. Since its establishment the dairy development board has planned and spearheaded Indias Dairy programmer by placing dairy development in the hands of milk producers and the professionals they employ to manage their co-operatives. In addition, NDDB also promotes other commodity based co-operative, allied industries and veterinary biologically on an intensive and nation wide basis.

Objectives of NDDB: To sponsor, promote, manage, acquire, construct or control any plant or work, which promote projects of general public utility relation to dairying. To make information available on request to technical services to increase production of Milk. To prepare initial feasibility studies of dairying and other dairy related projects and undertake subsequent designing planning and start up those projects. To undertake research and development programme related to production and marketing of milk and milk products. To provide assistance for exchange of information to other international agencies.

KARNATAKA MILK FEDERATIONThe first dairy in Karnataka was started in Kudige in Kodagu district in 1955, further in June 1974; an integrated project was launched in Karnataka to restructure and reorganize the dairy industry on the cooperative principle and to lay foundation for a new direction in dairy development. In 1975, the World Bank aided dairy development was initiated. The present Karnataka Milk Federation (KMF) came into existence in 1984-as a result of merging of Karnataka Dairy Development Cooperation, small co-operatives and Karnataka Milk Production

Development and loose vendors. At the end of the March 1998, the network of 8023 Diary Cooperative Societies (DCS) have been established which are spread over 166 taluks of the total 175 taluks in all 27 districts of Karnataka. There are 13 Milk Unions and Dharwad Milk Union (DMU) is one among them. There are 35 Chilling centers, 3 Farm coolers, 15 Liquid milk

Limited (KMF)KMF is the apex Body in Karnataka representing Dairy Cooperatives. It is the third largest dairy co-operative amongst the dairy co-operatives in the country. To impart training, institutes at Bangalore and regional training institutes at Dharwad and Gulbarga are functioning. Three nitrogen plants (2 plants of 25 CPM and 1 plant of 5 CPM) are been set-up to supply nitrogen, which is used for Refrigeration purpose. Three diagnostic centers have been set-up for monitoring diseases: three fodder farms at Rajkunte, Kuttanahalli and Kodagu have been set-up to supply good quality of fodder and seed production farm at Shahpur has been set-up. The federation giving details of the latest technology in dairy industry etc is published Ksheer Sagar magazine monthly. KMF is a co-operative apex body in the state of Karnataka for representing dairy organizations and also implementing dairy

development activities to achieve the following objectives. Providing assured and remunerative market for all the milk produced by the farmer members. Providing hygienic milk to urban consumers. To build village level institutions in co-operative sector to manage the dairy activities. To ensure provision of milk production inputs, processing facilities and dissemination of know-how.

Dharwad Milk Union Ltd. KMFFUNCTIONS OF KMF Co-ordination of activities between the unions. Developing the markets for the increasing in milk production. To make the brand Nandini as a house hold name. Excellence in quality is to be maintained to lay a solid foundation for wide Spread acceptance of Nandini products. To increase the market share of Nandini.

Dharwad Milk Union Ltd. KMFToday the union is procuring milk from over 435 DCSs (District Co-Operative Societies) of which 319 are functional. Their Functional DCSs of which 319 are functional. Their functional DCSs has shown steady increase over the past few years with the member starting at 71787 in November 1997. The effort of the union on the procurement side has lead to its procuring in an average of 461846 of its milk everyday. Bankers - Belgaum Dist Co- operative Bank, State Bank of Mysore, Belgaum Malprabha Gramhina Bank Auditor Shri M. R. Joshi & co. Dharwad Asst. Auditor Shri S. B. Devarmuni Asst. Director Shri K. V. Joshi Senior Auditor 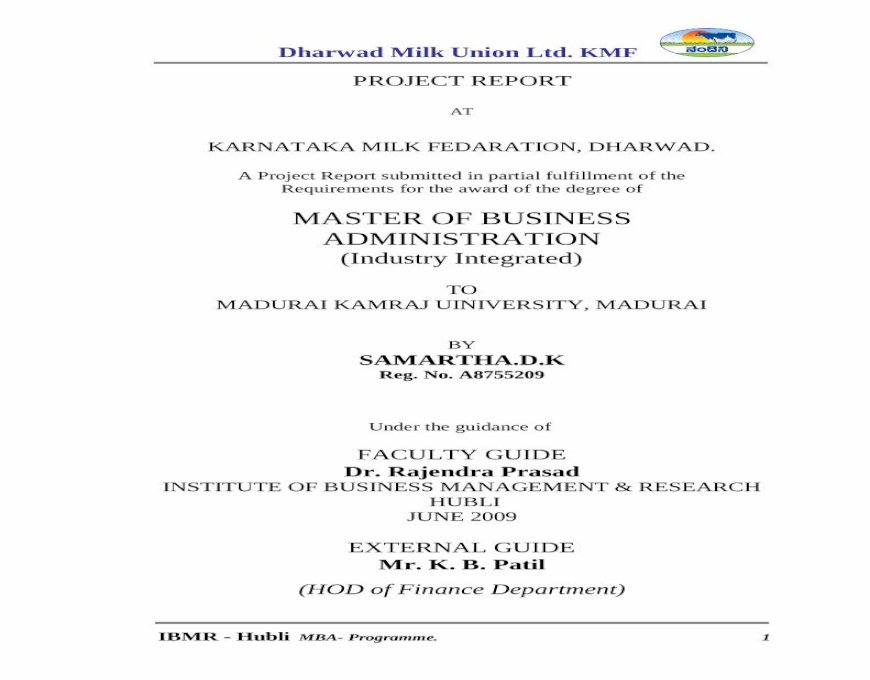