The library of the Royal College of Physicians of Edinburgh, today known as the Sibbald Library, is among the oldest and most important medical libraries in Britain, and has been continually functioning for over 330 years. Though its mission has recently changed from advanced medical research library to heritage-based special collections library, it has not diminished in importance or prestige among extant medical libraries. According to the Sibbald Librarian, Iain Milne, the catalogue contains over 55,000 monographs, 1,000 journals, and an extensive manuscript collection, all housed on-site.

The library dates to 1682, when Sir Robert Sibbald, a Fellow and founding member of the newly established Royal College of Physicians of Edinburgh (RCPE), donated “a presse with three shelfs full of books”, amounting to roughly 100 books.[footnoteRef:1] Within a year and a half of the founding of the library the positions of Librarian and Deputy Librarian had been established, underscoring the importance of an active and useful library to the mission of the RCPE.[footnoteRef:2] The library grew rapidly in volume as well as significance, and soon became the repository for a large number of influential scientific treatise including first editions of paradigm changing works such as Sir Isaac Newton’s Principia Mathematica and Charles Darwin’s On the Origin of the Species. Though we regard these books as rare today, it is critical to understanding the historic role of the library as a cutting-edge research institution to remember that when these books were published and acquired by the library they were at the forefront of scientific understanding. Because of the acquisition of these works as they were being published, in addition to the enormous amount of scholarly work being done by Fellows of the RCPE, the RCPE library was among the most important medical research libraries in Europe during the Enlightenment.[footnoteRef:3] [1: Antonia J. Bunch, Scottish Studies Vol. 3: Hospitals and Medical Libraries in Scotland (Edinburgh: Macdonald Printers Limited, 1975), 19.] [2: R. Passmore, Proceedings of the Royal College of Physicians of Edinburgh, Tercentenary Congress (Edinburgh: Royal College of Physicians of Edinburgh, 1982) 156.] [3: Morris McCray, Physicians and Society: A History of the Royal College of Physicians of Edinburgh, (Edinburgh: Birlinn, 2007), 79.]

The RCPE library remained at the forefront of medical libraries until 1964 when the United States run Medical Literature Analysis and Retrieval System (MEDLARS) was launched, providing the first computerized bibliography of current medical literature. In 1971 this database was renamed MEDLINE, an acronym for MEDLARS On-Line System, and was expanded to include all current medical literature. MEDLINE was made available online to select publishers who would then provide access to the contents of the database for a fee. This access was the first step in what led to the decline of all medical libraries as research institutions. The final blow came in 1997, when the United States government passed a law stating that all the information on MEDLINE would be accessible to anyone, free of charge.[footnoteRef:4] This effectively spelled an end to the role of medical libraries for up to the minute medical research centers.[footnoteRef:5] [4: U.S. National Library of Medicine National Institutes of Health website, “Milestones.” Last updated 15 March, 2011, http://apps.nlm.nih.gov/175/milestones.cfm Accessed 27 February, 2013.] [5: Julie J McGowan, “Evolution, revolution, or obsolescence: an examination of writings on the future of health sciences libraries,” Journal of the Medical Library Association. 100 (2012), 5-9.]

The RCPE library was among the first to understand the implications of the availability of MEDLINE as a free resource and in the later 1990s began cancelling subscriptions to journals, ceasing to purchase modern clinical books, and to start transitioning to a heritage based special collections library. Other medical libraries followed suit, and today a movement is underway to forge a path for medical libraries in general to become special collection libraries, in order to prevent the total decline of medical libraries.[footnoteRef:6] [6: Michael A Flannery, “Advocating for history of the health sciences libraries and librarians: a position paper by the History of the Health Sciences Section, Medical Library Association,” Journal of the Medical Library Association. 98 (2010), 9-11.]

The RCPE is, and always has been, an institution for which up-to-the-minute medical knowledge is critical to their mission. As such, financially supporting a library that is not engaged in the acquisition of current medical literature has been difficult for the RCPE. Additionally, maintenance and preservation of the RCPEs facilities, the beautiful and historic Physicians Hall at 9 Queen Street, is extremely expensive, spreading what the RCPE can afford to spend on heritage even thinner. The RCPE is funded through a mixture of fees from RCPE fellows, a small amount of investments and charitable donations, income generated through examination fees for medical specialists, educational fees, a small amount of grant money, and from renting out their facilities for events. From this the library receives an annual subvention that covers salaries and upkeep of the library materials and archives. This amount is limited to approximately 5% of revenue earned by the RCPE, and thus the library has undertaken outreach projects to generate needed additional income. [footnoteRef:7] The library has brought in lecturers and other presentations under its Edinburgh History of Medicine Group project, and has expanded and re-focused their website toward medical heritage. Additionally, the library makes appeals to the wider community for donations to support on-going projects such as conservation and acquisition of archival materials. As a result of budgetary constraints the library has just three full time employees, one of whom is salaried by the Wellcome Trust. The renaming of the RCPE library to the Sibbald Library five years ago was done largely as a marketing manoeuvre. In the never-ending quest for funds it was hoped that the new name would alert the public to the illustrious legacy of the library and raise awareness of it as a heritage institution, thus drawing in new users and hopefully monetary donations. [7: Royal College of Physicians of Edinburgh. “Annual Report and Accounts for the year ended 31st January, 2012.” http://www.rcpe.ac.uk/publications/annual-reports/annual-report-accounts-2011-12.pdf Accessed 5 March, 2013.]

Despite the fact that the contents of the Sibbald Library no longer relate to the current medical research that is a critical mission of the RCPE, it is still an important part of the RCPE as it is one of the most significant special collections libraries in Britain, thereby raising the prestige of the already well-respected RCPE. The library’s long and noteworthy history, combined with its unique collection and historic venue, set it apart from medical libraries the world over. In its new capacity as a heritage operation the Sibbald Library continues to be an integral part of the RCPE. The Sibbald Library has been ahead of the curve regarding the changing nature of medical libraries since the 1990s, and with the guidance of the librarian and support of the RCPE its role will not diminish.

Part of the new focus of the Sibbald Library is regular participation in RCPE events. The library organizes heritage displays in conjunction with conferences held at the Physicians Hall. This is where my role as intern at the Sibbald Library was fulfilled. The internship focused on researching the provenance and intertextuality of eighteenth century print and material culture relating to the history of medicine in Edinburgh, specifically as it relates to the RCPE.

During the first part of my internship I researched and organized a temporary installation of physicians’ canes and other associated material culture for a symposium held at the RCPE. I then took material from that installation and created a permanent display. The second part of the internship was research-focused. I researched the role of William Cullen in the development of the RCPE, both in policy and material culture, including his involvement with the library and the building of a new Physicians Hall. The findings from this research are being developed into a paper that Iain Milne will be presenting at the upcoming event “William Cullen and the Medical Enlightenment: An International Symposium.”[footnoteRef:8] [8: See http://www.cullenproject.ac.uk/news.php ]

The main body of the work I have done for the Sibbald Library relates to a collection of nine physicians canes dating to the 18th and 19th centuries, mostly. Traditionally, canes and physicians had a close association. In Greek mythology the deity Asclepius, who was associated with medicine and health, wielded a rod with a serpent wound round it. The physicians cane came into vogue in Britain in the eighteenth-century, after the fashion of cane carrying crossed the Channel from France. The cane was associated with the professions, emphasising the masculinity of intellectual rationality rather than physical prowess. Physicians’ canes were often passed from one physician to the next, some for centuries. Their popularity began to decline in the early nineteenth-century, but the tradition of the physicians cane carried over into the twentieth-century, mostly through portraiture.

Provenance for some of the canes was already known. I conducted research into the various individuals who owned the canes, drawing from a number of resources that included primary and secondary sources from within the Sibbald Library 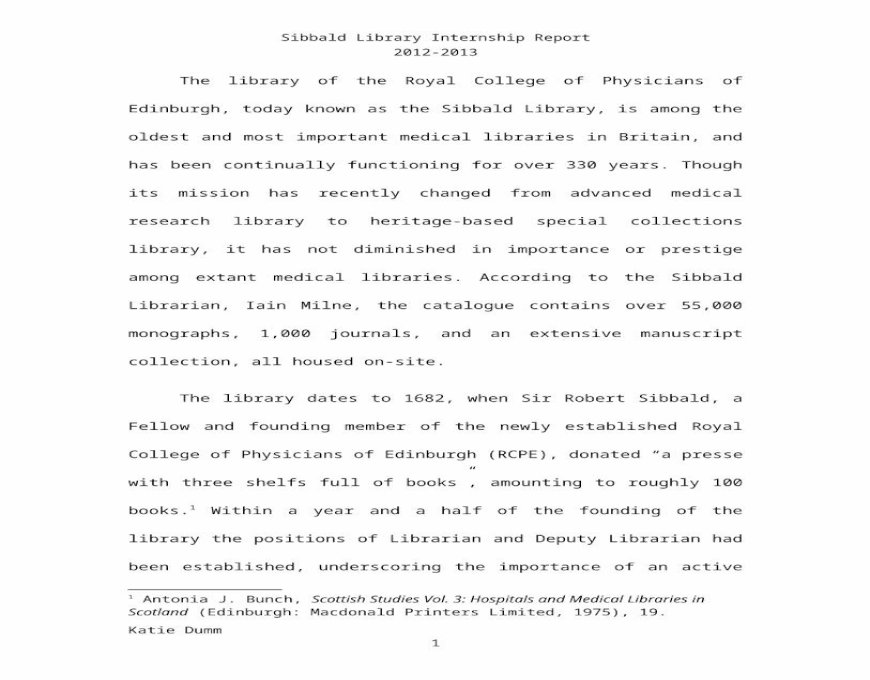 Kenya National Library Service Internship Policy and ... ... internship programmes are handled on the basis of standards, values and principles set by Public Service ... The labour

Putting an Internship Program to Work for You and Your Library By Sue Erickson, Library Director, Virginia Wesleyan College and Susan Paddock, Branch Manager,