D. Cianciarulo a, F. Guerra b

a PhD student in Geomatic and GIS, University of Trieste, Italy [email protected]

The paper presents the use of tablet pc in archaeology, it explains what is a tablet PC and the steps to draw archaeological remains

using a digital photomosaic. Its described the test made during the experience in the roman town Grumentum in South Italy (2006).

The use of a tablet pc in archaeological excavation is a powerful tool for digital documentation. This work explains a method to take

advantage of this new hardware using directly during the excavation. The advantages offered by this hardware are that one obtains

precision, quick recording times and the possibility to manipulate big data during an excavation. During Grumentum experience the

camera and rectified on site. The topography and location of finds are recorded using total station. All data are imported into tablet

PC, where the digital photoplan was available to draw directly on the screen.

In this last step in the tablet PC it was possible to draw the shapes and layers of single objects and stratigraphic layer. In general the

digitalization is made in a second step in laboratory, using tablet pc its possible reduce time and its possible to draw directly on the

site. The obvious advantage is the immediate data realization without necessity of inspections succeeded.

Tablet PC is a portable computer of small dimensions with

wich its possible to interact using an optical pen, and whose

a software like Microsoft Word. Tablet PC was born to be

used always and in every place. Entire professional categories

agendas; They need to exchange information and data using

portable systems with the same facility with which they use a

personal computer. Before the birth of the Tablet PC, the

only way in order to satisfy such requirements was to choose

between a PDA or a simple notebook. PDAs of last

generation are small but they havent the same functions of a

PC. Notebooks instead are powerful as desktop, but they

cannot be defined portable in the true sense of the word. To

resolve this problem its possible use a Tablet PC. They are

divided in two categories: Slate and Convertible. Slates are

without keyboard and they have the advantage of being

transformed in tablet moving and closing the screen over the

keyboard. Tablet PC is used with a electromagnetic pen

(digital Ink), similar in the shape to the optical pen of

PDA. The technology used from the greater part of the

producers of tablet is call Active Digitizer and has

characteristic following: The layer sensor for the input is

found instead behind screen LCD. Every Tablet PC uses

Windows XP Tablet PC Edition that differs from the classic

version of Windows XP for the acknowledgment of the

able Tablet PC to work with numerous software in

contemporary, the memory RAM has been expanded until

768 MB. It was able to work with many programs to make a

digital photoplan and to digitalize with software CAD.

2. THE CREATION OF PHOTOPLAN AND THE DIGITAL DRAW ON TABLET PC

The work described in this paper has been developed in many

phases. The final result is the product of many operations,

topographical and photogrammetrical methods. They have

been characterizes through appropriate strategies of work the

methods and the instruments to use in order to realize a

usable and obtainable final product using a Tablet PC. The

idea to draw the archaeological remains directly on Tablet PC

is an innovative example but improvable in the future. The

numerous difficulties during the realization of plants and

sections in an archaeological excavation, have encourage to

find a solution better and faster respect to the handmade draw

realized in every excavation. The excavation area selected to

experiment this instrument was a zone of particular interest

and it was assimilable to a plan (figure 2). The area selected

approximately to a square. The phase of staking out has been

enough fast because the areas stakes correspond to the limits

of the square. The peaks of the area delimiting a square, are

only four to reduce the possibility of ulterior errors in the

phase of the survey. A greater number of peaks can

assimilable to a square, has been further on subdivided in

rectangular smaller areas (2m x 1,5 m). Every apex of these

rectangles has been delimited from photogrammetrical targets

for the next phase tied to the photogrammetry. The survey

was made by plan coordinates method. Using a graduated bar

with a prism they have been finds the photogrammetrical

targets, the points that delimit the various stratigraphical

units and the limits of circular structure evidenced during the

In this phase they have been taken photos to the rectangular

delimited to the photogrammetrical targets. All the

excavation area has been therefore covered by photos that

subsequently has been elaborated with photogrammetrical

softwares. Thanks to topographical coordinates, it has been

possible to rectify photos of the excavation area. Through

based on control points, the photographed object has been

transformed from central perspective into orthogonal

projection. The prospective effects have been corrected and it

was attributed for every photos a measurable constant scale.

The final scale of the finished product has been of 1:20.

Through a common graphic software, it has been made the

relative photomosaic of the excavated area visible in the

use of a Tablet PC to create the plant of the excavation.

Respect to the graphical tablets in commerce, Tablet PC has

allowed to use in the same instrument all the potentialities of

a portable PC. Using the optical pen of Tablet PC directly on

the screen, it was possible to digitalize the numerous

architectonical and archaeological evidences presents on the

excavation area. In some cases, it has been possible to go

directly on the area thanks to the portability of the

instrument. During this experiment, after the phase of survey,

it was possible to continue the excavation that it was not

interrupted by the presence of the operators on the excavation

area. All the necessary data to digitalize were present on the

photoplan and it has been possible to continue the

This phase has introduced some difficulty, corrected and

resolved with numerous tests. A problem has been found

using directly on the screen the optical pen. One of the

problems was relative the sensibility of the pen on the screen,

easy solvable from the options of configuration of the optical

pen. But the big problem was using the software CAD. In

particular it was difficult to close polygons in the

every software CAD, it has been difficult to use the keys on

the optical pen. Clicking the key place on the pen, often it

was risked to modify the shape of the designed polygon. This

problem has been resolved using simultaneously a traditional

mouse. The optical pen is 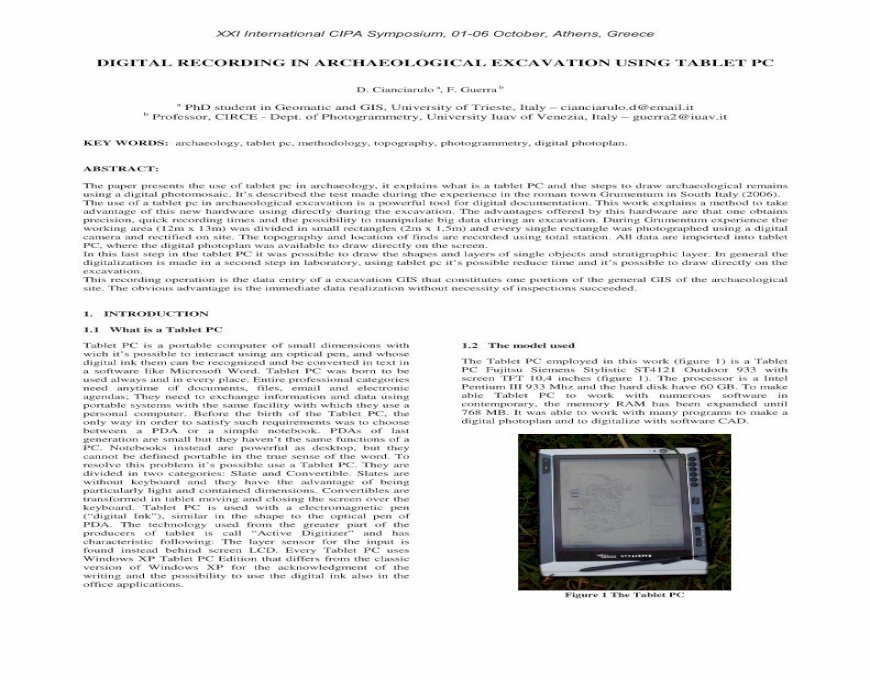 Value and values in excavation recording

a cooperative archaeological excavation project at the john young