FREEDOM OF EXPRESSION AND THE ELECTORAL PROCESS: THE CASE OF

1.Elections are one of the pivotal times for participation in government and democratic life. Suffrage is an essential mechanism in representative democracies through which the people not only elect their governors, but also accept or reject the policies and direction of government, and in general express their will.

2.Elections are tightly linked to freedom of expression and information as it is essential for citizens to have as much information as possible to make a decision in casting their votes. Accordingly, free circulation of facts, ideas, and opinions is crucial. Unquestionably, the most common way for citizens currently to inform themselves is through the media.

3.During elections, therefore, freedom of expression is particularly important. However, certain restrictions are often placed on this right during political campaigns and at the elections. Among the most common are restraints on campaign spending and duration, regulations on partisan propaganda, and bans on dissemination of opinion polls and exit polls.

4.The Inter-American Court of Human Rights (hereinafter, Inter-American Court) and the Inter-American Commission on Human Rights (hereinafter, IACHR) have found that freedom of expression is an indispensable requirement for the very existence of a democratic society. The Inter-American Court, furthermore, has held that, owing to the importance of this right, it is essential to protect and ensure its exercise in political debate during the electoral process. In light of these principles, the Office of the Special Rapporteur for Freedom of Expression has decided to address the issue of restrictions on election polls and their impact on freedom of expression. The purpose of this activity is to analyze the main doctrinal and jurisprudential trends on a matter that is certainly more complex than it appears at first sight. Without pretending to be exhaustive, this report seeks to make a contribution to the issue which could be expanded and added to in the future through concrete studies on particular situations.

5.Given the lack of inter-American jurisprudence in this sphere of freedom of expression, the Office of the Special Rapporteur has chosen to explore its possible boundaries through a comparative study of the case law of local tribunals in Europe and the Americas, in compliance with the mandate of the Heads of State and Government conferred at the Third Summit of the Americas held in Quebec, Canada, in April 2001. During the Summit, the Heads of State and Government ratified the mandate of the Special Rapporteur for Freedom of Expression, and further held that the States will support the work of the Inter-American System of Human Rights in the area of freedom of expression, through the Special Rapporteur for Freedom of Expression of the IACHR, will proceed to disseminate comparative case law studies, and will further endeavor to ensure that national laws on freedom of expression are consistent with international legal obligations.

1.The protection of electoral rights in international instruments

6.While elections are not enough to guarantee the existence of a democracy in the full sense of the term, without an open contest for power among social forces and political groups it is impossible to talk about a democratic regime. Hence all definitions of democracy, even minimal ones, consider the existence of free and regular elections to be a requirement sine qua non in order to be able to classify a regime as democratic. Thus, for example, for Italian political philosopher, Norberto Bobbio, democracy is "a set of procedural rules for arriving at collective decisions in a way which accommodates and facilitates the fullest possible participation of interested parties." Therefore, the realization of democracy, in the first place, presupposes acts of will on the part of the citizenry; second, these acts of will must be carried out freely; and, finally, those decisions, which materialize from elections, require the participation of as many citizens as possible.

7.In the inter-American system, the right to take part in government through elections enjoys ample protection. Article 20 of the American Declaration of the Rights and Duties of Man (hereinafter, the American Declaration), approved by the Ninth International Conference of American States in 1948, provides that every person having legal capacity is entitled to participate in the government of his country, directly or through his representatives, and to take part in popular elections, which shall be by secret ballot, and shall be honest, periodic and free.

8.For its part, Article 23 of the American Convention on Human Rights (hereinafter, American Convention), adopted at San Jos, Costa Rica on November 22, 1969, and in force since July 18, 1978, provides that every citizen shall enjoy the right to take part in the conduct of public affairs, directly or through freely chosen representatives and to vote and to be elected in genuine periodic elections, which shall be by universal and equal suffrage and by secret ballot that guarantees the free expression of the will of the voters.

9.The same occurs in the framework of the universal system for protection of human rights. Thus, the Universal Declaration of Human Rights adopted by the General Assembly of the United Nations on December 10, 1948, provides at Article 21 that [e]veryone has the right to take part in the government of his country, directly or through freely chosen representatives. It also states that [t]he will of the people shall be the basis of the authority of government; this will shall be expressed in periodic and genuine elections which shall be by universal and equal suffrage and shall be held by secret vote or by equivalent free voting procedures.

10.In the same fashion, Article 25 of the International Covenant on Civil and Political Rights, which was opened for signature, ratification, and accession on December 16, 1966, and entered into force on March 23, 1976, provides that all citizens shall have the right and opportunity [t]o take part in the conduct of public affairs, directly or through freely chosen representatives and [t]o vote and to be elected at genuine periodic elections which shall be by universal and equal suffrage and shall be held by secret ballot, guaranteeing the free expression of the will of the electors.

2.The importance of freedom of expression in the electoral process

11.As mentioned, freedom of expression is particularly important in electoral processes since, in order to be able to make free and rational decisions, it is necessary for citizens to have as much information as possible on the candidates, their proposals, and the political context as a whole.

12.That is what the Inter-American Court found when it ruled that freedom of thought and expression is an essential tool for the formation of voters opinions. It is also a genuine means for analyzing the political platforms of the various candidates, and permits greater disclosure and oversight of the future authorities and their administration.

13.The Inter-American Court notes that the formation of the collective will through the exercise of individual suffrage is nurtured by the different options proposed by political parties through the candidates that represent them. Democratic debate requires the free circulation of the ideas of and information on those candidates and their political parties by the media, candidates themselves, and anyone who wishes to express their opinion or provide information. It is essential for everyone to be able to question and enquire about the capacity and suitability of candidates, as well as to disagree with and oppose their proposals, ideas and opinions, so that voters can form an opinion in order to vote. It is because of this crucial role that freedom of expression plays at the time of elections that the Inter-American Court considers it indispensable to protect and ensure this right in the political discussions that precede the government elections.

14.In the same way, the European Court of Human Rights (hereinafter, the European Court) has determined that the two rights are interrelated and that freedom of expression is one of the conditions necessary to ensure the free expression of the opinion of the people in the choice of the legislature. Therefore, it is particularly important for opinions and information of every kind to be allowed to circulate freely in the period leading to elections.

15.Certainly, for the Inter-American Court, the exercise of political rights and freedom of thought and expression are intimately linked and mutually strengthening. By the same token, the European Court held that free elections and freedom of expression, in particular political debate, together form the foundations of any democratic system.

16.The Office of the Special Rapporteur has reiterated that the media strengthen democracy through the exercise of freedom of expression. During elections there are different ways in which the media can encourage the public participation that is essential in democratic development: by providing information on government performance, providing guidance to voters on how to exercise their rights, reporting on campaign progress, offering a platform for political parties to spread their message among the electorate, and enabling candidates to debate with one another.

17.Electoral surveys and their publication are one of the rites of modern political campaigns. Opinion polls are regularly broadcast 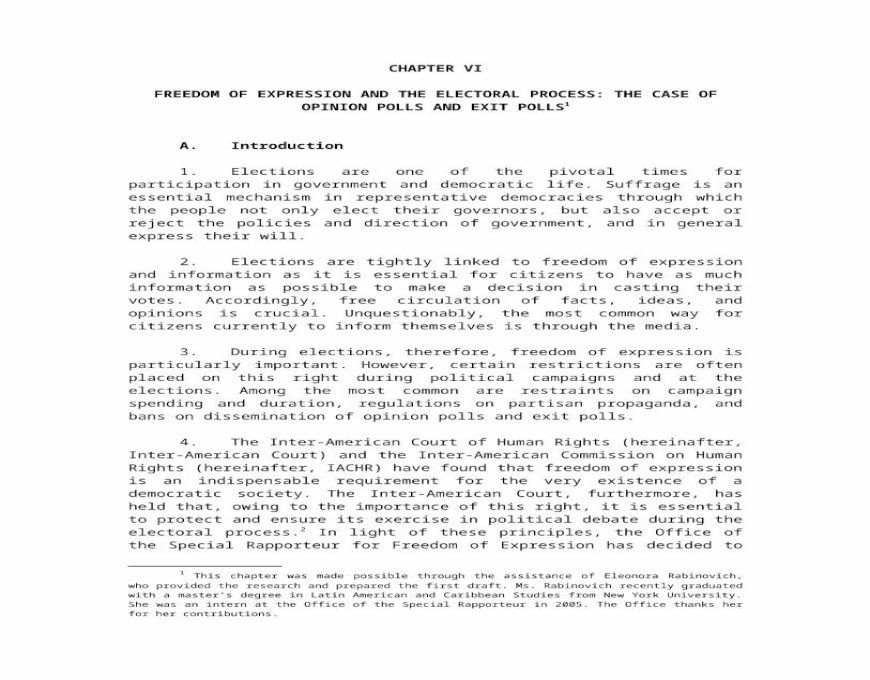 05. BOBBIO, Norberto, The Theory of Law and the International Legal System a Talkâ€‌