The Age of the Church Fathers Patristic Period (AD 95 636)Ambrose -- man of action; upset many contemporaries. Empress Justina tried to take two basilicas from Catholics and give them to Arians, he dared her to execute him. His own people rallied behind him in the face of imperial troops. In disputes with the Emperor Auxentius, he stated: The emperor is in the Church, not above the Church. Publicly admonished Emperor Theodosius for massacring 7,000 innocent people. The emperor did public penance. Ambrose, the fighter, sent to Milan as Roman governor and chosen while yet a catechumen to be the peoples bishop. He also converted Augustine. Ambrose was a passionate little man with a high forehead, a long melancholy face and great eyes -- a frail figure, a man aristocratic heritage and learning. His sermons often modeled on Cicero; his ideas showed the influence of contemporary thinkers and philosophers; borrowed freely from pagan authors. Humanity, for him, was, above all, spirit. In order to think rightly of God and the human soul, the closest thing to God, no material reality at all was to be dwelt upon. He was an enthusiastic champion of consecrated virginity. Augustine held Ambrose in high esteem. And his mother, Monica, loved Ambrose as an angel of God who brought her son from his former ways and led him to Christ. It was Ambrose, after all, who placed his hands on the shoulders of the naked Augustine as he descended into the baptismal fountain to put on Christ.

2The materials for a biography of the Saint are chiefly to be found scattered through his writings, since the "Life" written after his death by his secretary, Paulinus, at the suggestion of St. Augustine, is extremely disappointing. Bishop of Milan from 374 to 397; born probably 340, at Trier, Arles, or Lyons; died 4 April, 397. He was one of the most illustrious Fathers and Doctors of the Church, and fitly chosen, together with St. Augustine, St. John Chrysostom, and St. Athanasius, to uphold the venerable Chair of the Prince of the Apostles in the tribune of St. Peter's at RomeSt. Ambrose, the son of the Praetorian Prefect of Gaul, studied law, became a lawyer, and eventually became governor.Upon the death of Milans Arian bishop, the people clamored for St. Ambrose to succeed him, although he was only a catechumen at that time. He was soon baptized, ordained, and installed as bishop.St. Ambrose defended the Churchs independence from the state. When Emperor Theodosius slaughtered 700 people AD 390, St. Ambrose excommunicated him and forced the emperor to make public penance. The emperor was pardoned after eight months of prayer and penance.As bishop he was an ardent opponent of Arianism, he encouraged monasticism, introduced hymns into the liturgy, and facilitated theological exchange with the east.

Although the contents are based upon the New Testament, and it is a profession of faith in the Apostles teaching, the author and exact date of the Apostles Creed are unknown. It was first mentioned by St. Ambrose AD 390.It is based on a baptismal creed used in Rome, known as the Roman Creed, and for this reason it was particularly accepted in the West where it was always associated with the baptismal rite.The creed is divided into three sections: The Father, the Son, and the Holy Spirit.

Ambrose and the Apostle`s CreedAmbrose and the AriansIt was but natural that a prelate so high-minded, so affable, so kind to the poor, so completely devoting his great gifts to the service of Christ and of humanity, should soon win the enthusiastic love of his people. Rarely, if ever, has a Christian bishop been so universally popular, in the best sense of that much abused term, as Ambrose of Milan. This popularity, conjoined with his intrepidity, was the secret of his success in routing enthroned iniquity. The heretical Empress Justina and her barbarian advisers would many a time fain have silenced him by exile or assassination, but, like Herod in the case of the Baptist, they "feared the multitude". His heroic struggles against the aggressions of the secular power have immortalized him as the model and forerunner of future Hildebrands, Beckets, and other champions of religious liberty. The elder Valentinian died suddenly in 375, the year following the consecration of Ambrose, leaving his Arian brother Valens to scourge the East, and his oldest son, Gratian, to rule the provinces formerly presided over by Ambrosius, with no provision for the government of Italy. The army seized the reins and proclaimed emperor the son of Valentinian by his second wife, Justina, a boy four years old. Gratian good-naturally acquiesced, and assigned to his half-brother the sovereignty of Italy, Illyricum, and Africa. Justina had prudently concealed her Arian view during the lifetime of her orthodox husband, but now, abetted by a powerful and mainly Gothic faction at court, proclaimed her determination to rear her child in that heresy, and once more attempt to Arianize the West. This of necessity brought her into direct collision with the Bishop of Milan, who had quenched the last embers of Arianism in his diocese. That heresy had never been popular among the common people; it owed its artificial vitality to the intrigues of courtiers and sovereigns. As a preliminary to the impending contest, Ambrose, at the request of Gratian, who was about to lead an army to the relief of Valens, and wished to have at hand an antidote against Oriental sophistry, wrote his noble work, "De Fide ad Gratianum Augustum", afterwards expanded, and extant in five books.The first passage at arms between Ambrose and the Empress was on the occasion of an episcopal election at Sirmium, the capital of Illyricum, and at the time the residence of Justina. Notwithstanding her efforts, Ambrose was successful in securing the election of a Catholic bishop. He followed up this victory by procuring, at the Council of Aquileia, (381), over which he presided, the deposition of the only remaining Arianizing prelates of the West, Palladius and Secundianus, both Illyrians. The battle royal between Ambrose and the Empress, in the years 385,386, has been graphically described by Cardinal Newman in his "Historical Sketches". The question at issue was the surrender of one of the basilicas to the Arians for public worship. Throughout the long struggle Ambrose displayed in an eminent degree all the qualities of a great leader.His intrepidity in the moments of personal danger was equalled only by his admirable moderation; for, at certain critical stages of the drama one word from him would have hurled the Empress and her son from their throne. That word was never spoken. An enduring result of this great struggle with despotism was the rapid development during its course of the ecclesiastical chant, of which Ambrose laid the foundation. Unable to overcome the fortitude of the Bishop and the spirit of the people, the court finally desisted from its efforts. Ere long it was forced to call upon Ambrose to exert himself to save the imperilled throne.Already he had been sent on an embassy to the court of the usurper, Maximus, who in the year 383 had defeated and slain Gratian, and now ruled in his place. Largely through his efforts an understanding had been reached between Maximus and Theodosius, whom Gratian had appointed to rule the East. It provided that Maximus should content himself with his present possessions and respect the territory of Valentinian II. Three years later Maximus determined to cross the Alps. The tyrant received Ambrose unfavourably and, on the plea, very honourable to the Saint, that he refused to hold communion with the bishops who had compassed the death of Priscillian (the first instance of capital punishment inflicted for heresy by a Christian prince) dismissed him summarily from his court. Shortly after, Maximus invaded Italy. Valentinian and his mother fled to Theodosius, who took up their cause, defeated the usurper, and put him to death. At this time Justina died, and Valentinian, by the advice of Theodosius, abjured Arianism and placed himself under the guidance of Ambrose, to whom he became sincerely attached. It was during the prolonged stay of Theodosius in the West that one of most remarkable episodes in the history of the Church took place; the public penance inflicted by the Bishop and submitted to by the Emperor. The long-received story, set afoot by the distant Theodoret, which extols the Saint's firmness at the expense of his equally pronounced virtues of prudence and meekness -that Ambrose stopped the Emperor at the porch of the church and publicly upbraided and humiliated him - is shown by modern criticism to have been greatly exaggerated. The emergency called into action every episcopal virtue. When the news reached Milan that the seditious Thessalonians had killed the Emperor's officials, Ambrose and the council of bishops, over which he happened to be presiding at the time, made an apparently successful appeal to the clemency of Theodosius.

Great was their horror, when, shortly after Theodosius, yielding to the suggestions of Rufinose and other courtiers, ordered an indiscriminate massacre of the citizens, in which seven thousand perished. In order to avoid meeting the blood-stained monarch or offering up the Holy Sacrifice in his presence, and, moreover, to give him time to ponder the enormity of a deed so foreign to his character,the Saint, pleading ill-health, and sensible that he exposed himself to the charge of cowardice, retired to the country, whence he sent a noble letter "written with my own hand, that thou alone mayst read it", exhorting the Emperor to repair his crime 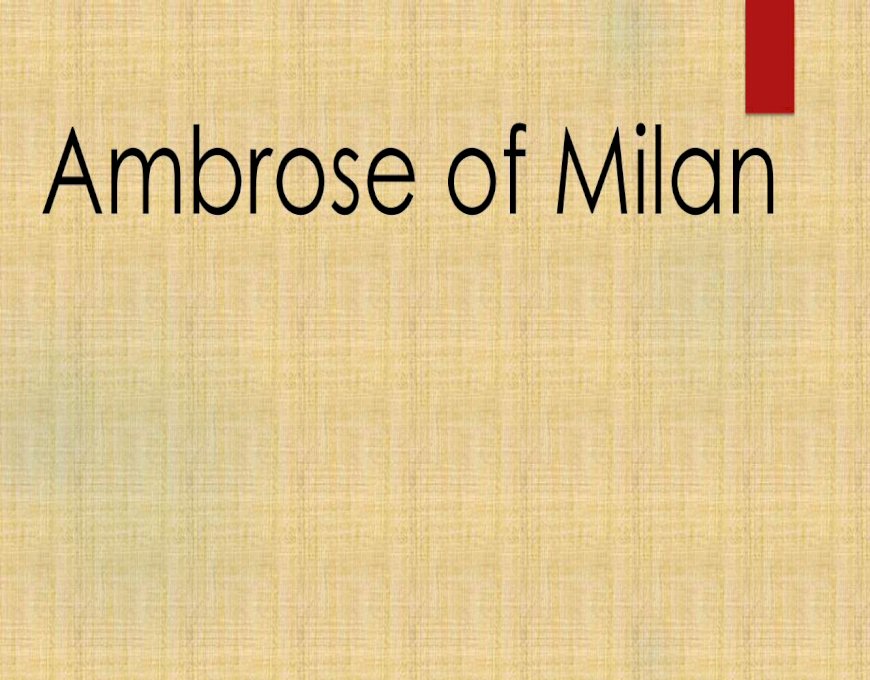 viewMarcus Aurelius. Commodus. Eastern Empire . Constantine. Edict of Milan. Julian. Against the Galileans. Theodosius. Ambrose. Justinian â€“ might be the subject of a

Ambrose on the Sacraments